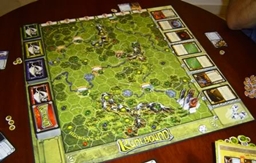 It is very difficult to build a good RPG board game. The constraints of the medium make it hard to compare favorably with the actual pen and paper or PC/video game role playing experience.

By far, the best board/card game I’ve found that emulates the role-playing experience is the Pathfinder Rise of the Runelords Adventure Card Game. The adventures get more difficult, you level up and the gear gets better. You maintain your items, spells, and levels from scenario to scenario through an entire Adventure Path, rather than start over each game play session. I’m sure I’ll post on that excellent game in the future.

Another game that I enjoy (though not as much) is Runebound (2nd Edition) from Fantasy Flight Games. It’s not as slick as Wizards of the Coast’s Wrath of Ashardalon, and not as complex as Fantasy Flight’s Rune Wars. But it’s got an appeal for RPGers.

The large board is of thick stock and divided into hexes like old school D&D maps. You travel through different terrain to either enter towns or land on hexes with colored adventure counters. The four different colors represent difficulty levels, from easiest (green) on up through yellow, purple, and red, granting from one to four experience points per color category.

When a player lands on a counter, they select an adventure card of the appropriate color. It can be a challenge, an event, or an encounter. Usually, there’s a fight: sometimes with a skill test involved. You gain experience (and usually gold) from successfully meeting the adventure card.

In the towns, you can buy all sorts of magic items and allies, all of which can aid you in various ways (combat being the most commonly helpful). There are victory conditions to determine a winner. I usually just play for fun, as this game takes several hours to complete.

There is player vs. player combat, but that rarely happens: it’s just not a key element of the game.

A notable feature is the movement dice. You roll up to five movement dice, which are marked with multiple terrain symbols on each side. You sort your dice out and use one symbol from each side to move through the desired terrain! This is rather neat and changes the “roll and move X spaces in whatever direction” method.

But it’s combat that really sets this game aside. Each hero (male or female) and monster has three attributes with scores: Mind (Ranged), Body (Melee) and Spirit (Magic). In one round, the hero will attack with one of those attributes and defend with the other two. And you take damage if you lose, whether it was an attack or a defend.

Each attribute also has an associated damage value. So you factor in your attribute values, as well as those of the enemy, to decide when to attack and defend. This is an intriguing method. 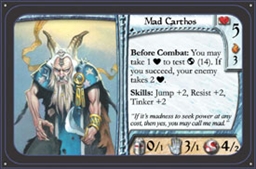 If you have an ally, you can use them to attack in one of the three phases, decreasing your possible damage (can you say, ‘meat shield’?).

Green combats aren’t too bad, but the level of difficulty definitely goes up as you move from color to color. You can trade your experience in to increase your attributes, health, or stamina. And of course, the more gold you get, the better your market purchases will likely be.

The game is set in the world of Terrinoth, which it shares with other Fantasy Flight games such as Descent, Rune Age, and Rune Wars, but they are all independent of each other. There is a storyline inherent in the game and the little stories on the cards enhance this, but it’s really extraneous.

You really just need to move forward and either defeat Margath or three red challenge cards. But as with most RPGs, if you read the cards with some heart and you apply your imagination, there’s more to this game. 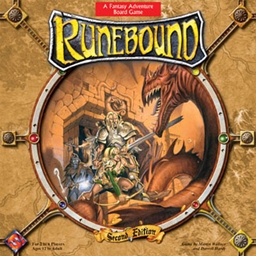 I’ve played solo and it works, but it’s dull. Part of the attraction of Runebound is sharing the adventure with friends, from “no way” rolls to “oh crap” card readings. Runebound definitely works as a two-player game.

Though the game is a bit hard to (affordably) find these days, Fantasy Flight did produce twenty-four supplement decks: six in each of four categories: Adventures, Challenges, Items and Allies and Classes. These add freshness to the base game.

They also produced five big board expansions (though one, Midnight, is all but impossible to obtain). They come with a full size board that you lay over the original game’s board and some additional cards to change the flavor. For example, Islands of Dread adds, well, islands, and Sands of Al Kalim moves to the desert and introduces story quests.

Curiously, Runebound doesn’t seem as fun as it actually is, until you play it. But at the end of the session, you realize you and your friends had a good time. So, it works. Fantasy Flight likes to introduce new versions of their games after having let supply dry up over several years. So I’m thinking there may be a new version of Runebound coming out before too long.

But I think that Runebound 2nd Edition is a solid RPG board game with some useful expansions. And it comes with twelve heroes of varying abilities, so there’s some replay value built in. I’d give it a try if you get a chance.

Also, there’s a solid player community with fan-made contributions over at Board Game Geek. Fantasy author J.C. Hendee is a big-time Runebound player.

Hmm… I wonder if John will continue letting me write for Black Gate after this post. I mean, I tear off the shrink wrap and actually PLAY the board games I buy!

Additional Runebound posts have followed this one:

He began playing board games with Candy Land and Chutes and Ladders as a child and just played Transformers Monopoly with his son last week.

Here’s a five minute Runebound review from the folks over at BoredToDeathTV.

You… you take the shrinkwrap *off* your games??

Thanks for the great review! Runebound is one I’ve wanted to try for a long time. And I desperately want that MIDNIGHT expansion…

I have three of the big board expansions, but The Frozen Wastes is rarely for sale for under $70 and if you can find Midnight at all, it’s over $100.

I do like some of the card set expansions, as you can mix them in and out for a little variety.

And there are several mechanics changes throughout the expansions, so the game “grows” beyond the base set rules.

Runebound can be sort of a mechanical exercise if you don’t plug in the imagination (perhaps why solo doesn’t work for me).

But when you do, I think the game is more than the sum of its parts and a nice RPG experience. I’ve yet to finish a game though: set aside at least two hours; likely more.

[…] Today in The Public Life of Sherlock Holmes, I went with something a little more geared towards that site’s target audience. […]

The Frozen Wastes goes for $70? I’ve been debating whether or not to get rid of it, but if it’s worth that much, the debate may be over.

@Jeff – yeah, it’s the hardest to find (other than Midnight) of the big boards and I don’t recall seeing it under $65 for a couple years: probably not even under $70. That’s why I don’t have a copy.

Of course, I sank so much into the PF Card Game I may not be buying for any other game system for quite awhile…

Fantasy Flight reissued Mists a year or two ago, so I hold out hopes they might throw me a bone on Frozen.

I didn’t mention BattleLore, which is a tactical fantasy combat game set in the same world of Terrinoth.

At GenCon, Fantasy Flight announced it’s coming out as an app game. Looks pretty cool to me!
http://www.fantasyflightgames.com/edge_news.asp?eidn=5004

As I predicted in this post, Fantasy Flight is releasing a third edition of Runebound. Looks like they’ve changed things up a bit. We shall see…