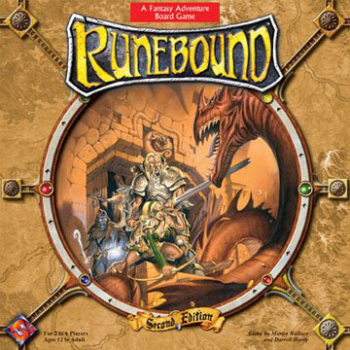 A couple of years ago I was really jonesing for some good old-fashioned tabletop fantasy role playing, but I was without a group and didn’t have the time to run a solo game for my wife. Then, like a beam from heaven, we received Runebound 2nd Edition for Christmas 2009. For the next few months, pretty much any time we had a couple hours of free time, my wife would ask, “Runebound?”

Runebound is a board game of fantasy adventure. Each player takes on the role of one from a dozen (mostly unsavory) heroes, travels the map, faces challenges of ever-increasing difficulty, gains skill and treasure, and visits cities to heal, buy items and hire allies. The goal is to be the hero who defeats the great dragon Lord Margath before he can once again rise to power. (And if he can’t be found, snuffing three other dragons will do.)

The game board is a map that would catch Bilbo’s interest, with regional names (Howling Giant Hills, Moonglow Marsh) scattered liberally about that have zero effect on game play. Each hex has one of five terrain types. To move you roll five (when healthy) movement dice. A movement die is six-sided, with each face containing two or three terrain symbols. Spending a die with the appropriate terrain symbol showing allows you to move into a hex of that type. The odds of rolling each type vary, and on many turns a player is left weighing where she eventually wants to go against where she can get right now. 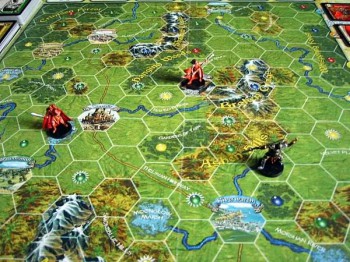 Scattered around the map are green, yellow, purple, and red adventure counters. If you end your movement phase on one of these encounters, you may draw a card from the matching deck and face the challenge.

Click on any of the images below to get a larger view.

The green deck includes such unpleasantness as Night Wolves and False Floor. The red deck includes Lord Margath and all his dragon cronies. Almost every card includes flavor text that adds color and often advances the overall story, but has zero effect on game play.

For example, on the False Floor card it reads, “The obvious pressure panel is just a decoy. It’s the soul-sucking vapor slowly being released that’s the problem.” 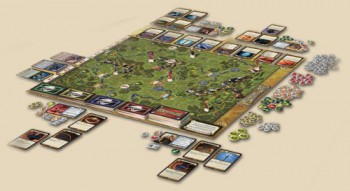 A hero who spends too much time fighting green challenges isn’t going to advance quickly enough, but a hero who takes on a tougher challenge before he’s ready is very like to die — er, be knocked out.

Heroes and their allies have five stats: Mind, Body, Spirit, Life, and Stamina. The hero Mad Carthos (“If it’s madness to seek power at any cost, then yes, you may call me mad,”) starts the game with Mind of 0/1; Body, 3/1; and Spirit, 4/2.

The number before the slash gets added to dice rolls when making a skill check. The number after the slash is how many wounds he inflicts in the corresponding phase of combat; Mind with Range, Body with Melee, and Spirit with Magic. He also has a Life of 5, which is how many wounds he can take before dying, and a Stamina of 3, which gets used in a myriad of ways in the game. 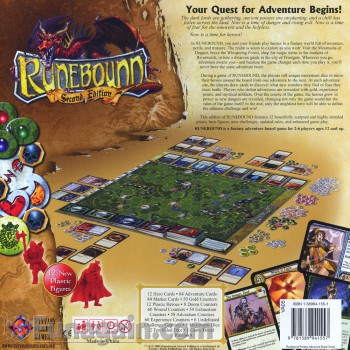 Let’s say Mad Carthos is duking it out with False Floor, which has the stats 15/1, 10/0, 11/2, and a Life of 3. The stats on a challenge card are not a number to be added to a dice roll, but rather a target number. Assuming Mad hasn’t improved his stats yet or acquired a useful item, in the Range (Mind) phase of a combat round, the player rolls two ten-sided dice, adds them together and adds his stat of 0. 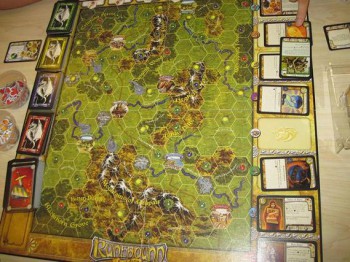 It’s a straightforward and elegant system, although the level of abstraction does make for some comical moments. For example, the stat used for Diplomacy is Spirit, Mad Carthos’s strong suit. Who knew Mad had such a way with words?

Not every card in the adventure decks is a challenge to be defeated.

There are events and encounters too, but once you start drawing cards, your turn is not done until you have resolved a challenge.

That usually means fighting. Every round of combat involves Mind, Body, and Spirit, so your hero either needs to develop into a well-rounded killer or else have allies to cover weak spots. The stats given above make Mad Carthos a pretty tough old man, but that 0 in Mind really hurts him. Because the Range phase is the first phase of combat and Magic the last, Mad is very likely to take a beating before he gets a chance to use his big gun. 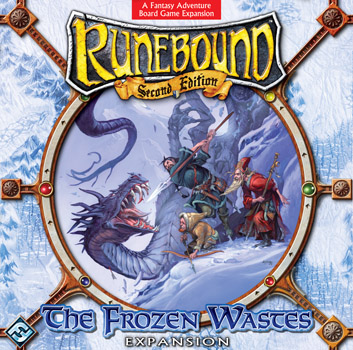 Combinatorics makes the game. There are so many encounters, items and allies, there’s no telling how a game will progress.

If Mad Carthos can get an item early on that compensates for his weak Mind, he can focus on developing a killer Spirit. But if no such item shows up, or one does but he’s unable to acquire it, he’ll probably need to spend his early advances just getting his Mind strong enough so he can live to use his Spirit.

A weak spot in the game for us was a shortage of adventure cards.

There are a lot, but it was still common for us to cycle through the green and yellow decks during a game. If we killed Lord Vorakesh or his wife early on, it was a little distracting when they’d pop back up latter.

However, Runebound has plenty of expansions. After researching each, I carefully chose a few to add to our game, and we haven’t cycled a deck since. 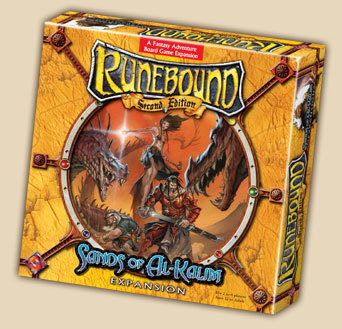 So where does the roleplaying come in? The highlight of pen-and-paper RPGs for me is deep immersion into a character, and you won’t find that here. But it has some of the trappings and a lot of atmosphere.

There’s a story running through the game that any turn of card can add to it. These can inspire. And let me tellyou about our first game.

I was running Mad Carthos. Mad has a Before Combat skill: he can inflict a wound on himself in order to make a Spirit test, and if he succeeds, his enemy takes two wounds. Facing a challenge early in the game, I looked at the numbers on the challenge card, looked at the numbers on my hero, and decided I needed an edge. I set my jaw, looked my wife in the eye, held out my arm, and mimed slashing wrist.

My wife burst out laughing, and we’ve been roleplaying our way through Runebound ever since.

The problem with this game, and it’s insoluble without a new edition (and, probably, throwing away all those expansions) is that the it revolves around a series of quietly escalating encounters; the encounter system is built around an abstracted combat system, and the combat system is so abstracted as to feel thoroughly pointless and uninvolving. So the game reduces itself to set of sub-monopoly (I’d argue there is indeed more atmosphere in Monopoly) dice throwing exercises for several hours. Pity, because elements are brilliant.

Black Gate » Blog Archive » BattleLore: You Got Your Goblins in My Hundred Years War!

[…] Jeff Stehman’s last reviews for us were Magic Realm and Runebound. […]