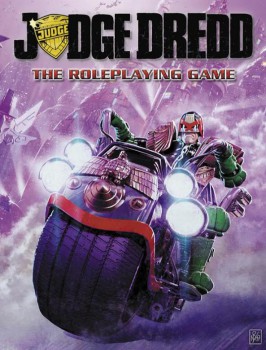 In this gaming review from Black Gate 14, Robert Rowe explores the world of Mega-city, the home of “the law,” Judge Dredd. I admit that I personally have never read the comic and am one of those sorry souls who only know of Judge Dredd through the Stallone film, but this review makes me want to explore the world in a bit more depth.

Judge Dredd is an iconic comic book character – a marvelous piece of fascist certainty in the absurdly dystopic future of Mega-City One. This new book from Mongoose Publishing is the third attempt to recreate Dredd’s world for role-players. The first was a stand-alone game, the second an RPG based on the d20 system, and this installment is a meaty tome based on the Traveller rules. Take note: you will need the Traveller Core Rulebook to play this version of Judge Dredd. As such, this game will benefit and/or suffer from the strengths and shortcomings of Traveller according to your own personal feelings about that system.

Onto the book itself. The production values are outstanding, treating the reader to full-color artwork from the inside cover’s world map of 2131 to the panorama of Mega-city one sprawled across the last page and back cover. The layout is clear and clean and after a very brief introduction jumps right into Judge creation.

The book promises later supplements for rolling up mutants, citizens, and other scum, but, in this manual, “the focus is four square on the Judges.” In creating your character, you go through four terms at the Academy with the option of creating more seasoned judges by adding a few years of street duty. It takes a lot of rolls to get through training, increasing stats, skills, and adding a bit of flavor to your character. According to your roll, a few parts of the character creation can provide you with choices about which approach and skills to use to solve a problem. This is a wonderful way to liven up the creation process and provide more depth to characters from the start. I wish more events like this occurred, but good GM’s can use these as templates to flesh out the more standard stat or skill-up outcomes.

The rest of the book details Mega-City One and the duties of a Judge. The second section explains the skills and techniques Judges utilize to keep the tide of anarchy at bay. This section is, again, nicely laid out with exemplars for the time and difficulty of various tasks. It helps to know roughly how long you need to mull it over before sentencing a perp to 2 years for jaywalking. Moving forward a few sections, we get to “Crazies, Fatties, Muties & Perps.” This section gives you the stats of perps, aliens, and major villains such as Judge Death. There is also a fairly substantial table for rolling up the “traits” of mutants.

Onto the section you really want to see (or at least I did), Equipment. The Lawgiver pistol is one of the coolest weapons I’ve ever seen in a comic, and they do a nice job with it and the other essentials. There are two full-page pictures of a Judge, showing how all of his equipment is carried, and another page each for the Lawgiver and Lawmaster motorcycle. Other pieces of equipment are clearly explained through descriptions, stat tables, and, often, more pictures. This section alone made me want to start up a new Dredd campaign.

The rest of the book is mostly world background. This includes 10 pages of tables of sentencing rules for a panoply of crimes ranging from the heinous to the comical. There are also very detailed sections on the Justice Department and Mega-City One. These give nice background info to prep players and GM’s even if they’re not familiar with the Judge Dredd comics (and I suppose to help the poor souls who only know Dredd through Sylvester Stallone’s interpretation). But on the negative side, all these facts can become a bit dry and overwhelming.

The section on running the campaign has solid pointers, outlining key elements for quick, detailed, and epic stories/crimes. But given the mass of the book, more time could be given to creating the flavor of Dredd adventure and campaign. Also, a short introductory adventure for new Judges would be helpful. The tone of the book as a whole also misses some of what makes Judge Dredd so iconic, humor. The black humor of the world gets lost among all of the information in several sections. But the book does seek to regain this at the end. The final section lays out sector 13 of Mega-City One, and here we really get the pop-culture infused dark comedy the comics are famous for. With areas like the Jon Bon Jovi Block (and its arch rival the Bruce Springsteen Block), the absurd desperation of the city comes shining through.

Overall, if you like Judge Dredd and don’t absolutely hate the Traveller rules system, this is an excellent game packed with key information and well-laid out stats, all bound together in a very slick package.

[…] the Empire of the Aztecs, Middle Earth, Jack Vance’s Dying Earth, Judge Dredd’s Mega-City One, the Marvel Universe… heck, there were even role playing games about high school, fer […]