I’ve managed to do a couple of posts in a row on serious topics, and although there is certainly a place for serious things in fantasy [ask Joe Abecrombie as he is the current villain of all things serious in fantasy] I like the fact that fantasy can, and should be, funny. 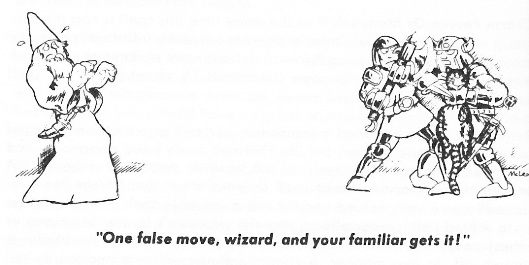 Now I’m not talking Terry Pratchett funny, who I don’t really find to be that funny, and I’m also not talking Robert Asprin funny, but more along the lines of visually funny. To me, the art of gaming and fantasy began in a time when people like Gary Gygax were struggling to define what it meant to be a fantasy role-player and just was that should ‘look like’.

By the late 1970s RPG art was pretty comic book inspired, and although it went to realism with Elmore, Easley, and Parkinson, that didn’t mean that the people actually playing the games were losing hours of sleep wondering how the socio-economic events of returning to their player-character villages with massive amounts of gold would actually negatively impact the lives of the citizenry from an inflationary standpoint.

No, they were sitting around a table having fun, laughing at the stupid things people, and the dice that motivate their actions, do. To this end, gaming takes on a certain degree of humor, certainly a more ‘boy centric’ kind of teen humor, but that by no means makes it any less valid. 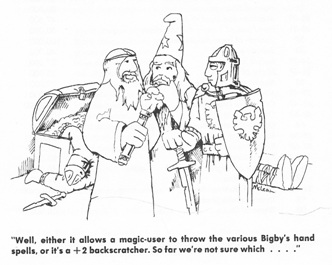 I mean really, this brings up another interesting point, that gaming is built for laughter, and if anyone has ever played an RPG for any amount of time they’re going to have hilarity built into one liners that only perhaps five people in the world find funny, and yet those five find REALLY funny. Examples include sayings such as ‘Doors don’t attack people!’ See, not funny, but to Todd Lockwood, it’s a side splitter. How about for me, ‘Halflings are made for jumping.’ Not funny, and yet hilarious if you were sitting at a gaming table with me in 1998.

For the purpose of showing the happier side to gaming, Gygax, in all his brilliance, devoted a certain number of images in the initial release of the 1st edition D&D Dungeon Master’s Guide to the art and one liners of Will McLean.

McLean’s singular talent in both the pages of the DMG and the comic’s section of Dragon Magazine was to poke fun at role-playing situations. He was the perfect foil to the seriousness of the genre, and his ability to blend modern-day symbols and word-play with fantasy action made his comic strips sing in the minds of all players. 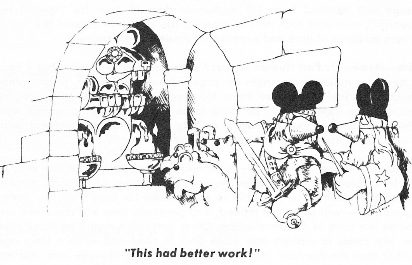 I challenge anyone who ever picked up a 1st edition DMG to not have smiled when they found a piece of McLean art. And for the purpose of this small and happy post, I’ll be sure to include some of my favorites from that venerable volume.

Still, McLean, for all his talent, disappeared from sight somewhere in the middle 80s, and like the esteemed David Trampier, is beyond the common fan’s ability to find or interview. I’ve certainly looked, but to no avail, although my mental catalogue of McLean art was justly rewarded when I correctly remembered he’d also done the artwork for the original release of the computer game Wizardry. Most of his art for that game, all done in the same vein as the DMG pieces, can be found here.

Having managed many of the most familiar pieces of McLean’s art, the nostalgia took me, as it often does, and I went about socializing with artists in hopes of finding someone who enjoyed the art of McLean as much as I did.

Although artist fans do indeed exist, none had the time to provide a newly minted image as a kind of homage, that is until Jeff ‘Noodles’ Laubenstein said he’d be happy to help. Note: Jeff is always ready to help, a consummate nice guy, and unfortunately like many truly nice guys, that talent has served him little, and I take great umbrage with any Art Director foolish enough to deny him business because they perceive someone with thirty years experience can’t change a style to suit their needs.

Anyway, together with Jeff, I worked up several McLean-like comedy one-liners that could be used to create a comic strip of our own. He took the descriptions, picked his favorite, and then whipped up something completely unexpected.

Gone were the crude edges of McLean, but preserved was the humor, and by god I found myself smiling and happy like I hadn’t been since those heady days of my youth in 81. Jeff had done it, and with him I’ll make this promise, as long as there are gamers out there who still enjoy a good laugh at the expense of the games they love, then Jeff and I will continue to put out this humor because you all deserve it!

For those of you who’ve managed to find my little Wednesday blog on Black Gate, and continue to give my words support, Jeff and I will be working to bring you more humor as religiously as our schedules allow. Whatever the current topic, just scroll on down and see if there’s a special bonus laugh in it for you.

Otherwise, I say stop taking yourself so seriously, and remember its fantasy after all! Whatever you do, don’t get caught up in the concept that reality needs to have a place in all this swords and sorcery stuff, that just cheapens it, trust me. Reality is your dwindling bank account and the fact that your fifteen year-old cat is about to die. I say smile while you can and enjoy the gift of your imagination, because sometimes it’s all that we have.

Man, I loved the cartoons in the DMG.

Oh, wow, does that bring back memories! I had almost completely forgotten about Will McLean’s art. You made me go dig out all my 1st ed. books just to flip through them again. And kudos to you guys; that tank line was pretty good.

JMichael: Thanks for the kudos. I just love it that people remember the DMG and still have fun with gaming humor. Glad you stopped by.

Thanks for this post about Will McLean. I had no idea he did the artwork for the original Wizardry, so the link to that work is much appreciated.

The new comic is fantastic! It definitely made me smile. Not only does it evoke the spirit of Mr. McLean, but the anachronistic humor reminds me a bit of J. D. Websters’s character Boredflak the wizard from Finieous Fingers. At one point Boredflak whips out a Thompson submachine gun and calls it his “wand of automatic missile fire”. Great stuff!

I still exist, although I haven’t been selling cartoons to gaming magazines in some time.

My blog is here, with links to my CafePress stores.

Whoops. My blog is here:

Zgrat: OMG! I’d forgotten about Boredflak, and that is a name from the past. Phil Foglio is another comic genius. Thanks for posting.

Will: How incredible to hear from you. I searched and searched only to come up short and here you find me. Fantastic, and your art, as above, is an inspiration! Thanks for stopping in.

Will: Not sure if you’ll read this, but thank you very much for taking the time to leave a comment and provide us with a link to your blog. Much appreciated!

Scott: Your more than welcome. I hope you and Jeff have a lot of fun creating new art for Black Gate each week.

~Zachary, (who finally got around to changing his login name)

[…] Comic II of the ‘Yet to be named’ Series!Oh, and as promised, all of you faithful get to see the next installment of the Noodles/Taylor comic which has yet to find a title, although we are working on that daily! Our current ‘process’ includes the creation of characters for the pieces, something that helps define what we are trying to do. To this point we’ve only repeated the wizard character, although in this one he doesn’t have a mustache. Give a vote, mustache or no? And yes, I hope you enjoy! If you missed the previous comic, you can find it here. […]

Black Gate » Blog Archive » Art of the Genre: An Inteview with Will McLean

[…] months ago I had the pleasure of writing up a small nostalgia piece on the Art of Will McLean, and after it hit the press John O’Neill gets me on my cell and tells me ‘It’s not […]