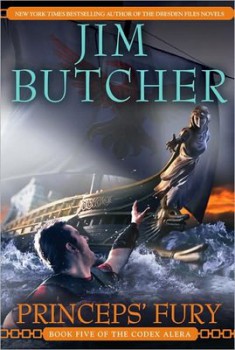 In 2004, Jim Butcher, author of the wildly successful Dresden Files, dropped a new epic fantasy series into the market. The Codex Alera series, which began with The Furies of Calderon, was a fascinating mash-up of imperial Roman culture, elementalist magic, monsters and politics. Princeps’ Fury is the fifth and newest volume in that series.

The book is written with Butcher’s characteristic wit and dynamite pacing. The main characters — Tavi and his friend Max, in particular — are almost invariably entertaining just to read. There is no shortage of tense moments, thrumming tension, and fierce joy when the heroes manage to outsmart or outmaneuver the seemingly-invincible villains. In Princeps’ Fury, Tavi — now the eponymous Princeps of the empire of Alera — fulfills his promise to return the lycanthropic Canim soldiers that his legions negotiated peace with in the previous novel to their homes on the other side of the sea. Once there, he discovers the Canim empire nearly annihilated by the Vord, a race of hive-minded insects that have been threatening Alera throughout the series.

Meanwhile, whole swaths of Alera itself have been taken over by the Vord, and it is up to Tavi’s uncle Bernard, and Bernard’s wife Amara, to stall their advance, while Tavi’s mother Isana struggles to end decades of war between Alera’s northern lords and the enigmatic Ice Men. There is a lot of drama happening at once, the culmination of events that were laid down in the last four books. Princeps’ Fury suffers a little from this diverted attention; it is not as fat and dense as epic fantasy novels usually are, and so by pursuing three different storylines simultaneously, they pan out to be a little glib.

Isana’s adventures trying to negotiate with the Ice Men seem to be the most egregious example of this; the Ice Men, who are barely relevant in the previous four novels, are introduced, the conflict between them and the northern lords is built up quickly and a little clunkily, and then everything is hastily resolved so that we are free to move on to the actual fighting. It seems to be a side-effect of trying to put a little too much into a volume that isn’t quite long enough to accommodate it.

And yet, for all its dramatic density, the book often feels painfully like an interim piece: something thrown together quickly to tie up the loose ends leftover from the last novel, and to set the stage for the climactic battle in the next. The Canim invasion, which was the subject of the preceding Captain’s Fury, is shunted aside almost immediately as the wolfish invaders are replaced with the stronger, more manifestly evil Vord. Tavi and his legionnaires hardly arrive in the Canim Empire before they realize it is time to turn around and go back, and while the actual events of that hasty retreat are certainly action-packed — in particular the moment when Tavi realizes he possesses a secret weapon against his psychic-insect enemies — at the same time, it is hard to avoid feeling a little let down.

As the series has progressed, the complex political maneuverings of Alera, their barbarian neighbors the Marat, the apparently astonishingly complex social structures of the Canim empire, have all been gradually tossed by the wayside as the central threat of the series becomes the enormous, unstoppable infestation of the Vord. This is more than a little problematic, as it causes Butcher to sacrifice the complexity and moral ambiguity he expressed early on, along with the exciting “dangerous ally” tension, for a much less interesting “good guys versus bad guys” dynamic. The Vord, after all, are a manifest and unalloyed evil, impossible to negotiate with, and present a near-limitless threat. In light of their existence, it is hard to say why any of the political maneuvering of High Lords and Ice Men should be anything other than a frustrating distraction.

Princeps’ Fury is a bit of an awkward shift, a story that seems like it is mostly treading water; but for all that, it is certainly worth the read. Butcher’s is a master hand at clever dialogue and suspenseful plotting, and he has got great skill at describing comprehensible military actions. If Princeps’ Fury seems like it hasn’t quite fulfilled the promise of the previous entries in the Codex Alera series, that is all right — it ought to make the sixth, and presumably final, book, First Lord’s Fury, that much better.