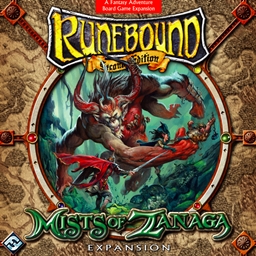 I previously wrote about Runebound (2nd Edition), an RPG-like board game from Fantasy Flight. You might want to give it a quick read to get the basics down. I also did a post on The Sands of Al-Kalim expansion. Next up is a look at another of the big box expansions: The Mists of Zanaga.

Mists is another of the ‘big box’ expansions for Runebound. It comes with a board that you lay over most of the original Runebound board, completely changing the terrain.

Runebound is a traditional Middle-Earth type of fantasy world, while The Sands of Al-Kalim was a desert setting. Mists of Zanaga is the classic jungle environment, with lost stone cities and desolate outposts in the wild.

The idea is that some powerful entity known as Tarakhe sleeps deep beneath Zangara. It is a primal force that corrupts the world and drove the lizardmen to abandon their empire and descend into barbarism.

A reptilian race known as the Mahkim are attempting to wake one of the primal gods that created Zangara. They hope it will destroy Tarakhe. Of course, it will also obliterate everything else. It is up to the heroes to stop this wakened god!

There are some rules changes from the base Runebound game. Roaming monsters can be encountered in the wilds, increasing the combat toll. But the biggest change is in the quest.

There are ten primal gods. When a challenge is defeated, a ritual token is placed on the corresponding ritual card. These rituals represent attempts by the Mahkim to call upon their gods. The first three ritual cards completed determine which primal god will awaken. Additional ritual cards affect that god’s power when they are completed. Needless to say, defeating a primal god is HARD. 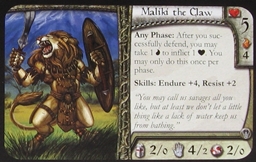 As is to be expected, the heroes and monsters are all jungle-themed and can be mixed in with the original game for a change. This expansion reminds me of the Mwangli Expanse in the Pathfinder world of Golarion.

Between the Roaming Monster track and the primal god quest, this expansion does vary considerably from the base game, even if a majority of the rules are still the same. There are other minor tweaks, such as those relating to the market decks. I think this is a good expansion, though I prefer The Sands of Al-Kalim.

Next up is a look at The Island of Dread big box. It’s unlikely I’ll ever be able to afford Midnight or The Frozen Wastes, so they probably won’t get reviews. Though I could do a couple on the various card deck expansions.

Bob, what do you think of the D&D board games like The Wrath of Ashardalon.? I have that one and have played it several times. I originally got it because I find it hard to find the time to play a dedicated RPG. How does it compare to Runebound?

NOLAbert – I’ve been meaning to write a post on Wrath; I need to play it again a few times, though.

I enjoy Wrath and my group played it for awhile before we moved to the Rise of the Runelords Pathfinder Adventure Card Game.

Wrath is a much faster paced game (and harder). I like that it’s cooperative, rather than competitive.

To me, Runebound just seems too mechanical. It requires the players’ imagination and game-attitude to make it more fun. I still can’t explain it properly: but while I do like playing Runebound, I never say, “Boy, that was a blast.”

I think Wrath has more enjoyment built into it. We’ve had more fun with it. It’s certainly quicker to play and there’s more constant flow.

Runebound feels like a wilderness crawl, with lots of encounters, where you level up and buy new equipment. So that’s an RPG-like experience. But like Talisman, it seems to go on and on. We’ve even started Runebound at second level so we can get further into a game.

I like what Runebound represents, it’s just a bit ponderous to play, I guess.

I own Legend of Drizz’t but I’ve never played it. I’ve been pondering the newer Temple of Elemental Evil entry.

Recently, I’ve been doing a little research for a post on Dungeon!, which I had as a kid and I’ve taught my son to play. It’s still a fun RPG board game and a good introduction to D&D. It’s actually pretty innovative, when you dig into it. We use minis, which makes it more fun.

BTW – Earlier this year (as I predicted in the initial Runebound post), Fantasy Flight introduced a new edition of Runebound. Which surely means the expansions will be coming out again.

They changed the combat mechanics, but I’m not going to sink money into a new version to find out how it works.

We have the Frozen Wastes expansion, another big box. It has an unusual story element in that you never face the big bad. Instead you face the bigger badder that the big bad has provoked into destroying the world. You can either kill him (good luck with that) or find his true love for him.

Since the bigger badder is a crash-landed alien, you spend a lot of time fighting robots.

If we had fallen in love with Frozen Wastes, we probably would have gotten the other big box expansions. However, we have mixed feelings about it and have recently decided to get rid of it.

By the time I was buying the big box expansions, Frozen Wastes was only selling second hand, for ridiculous prices. I did read that it had an alien storyline. Reminded me of AD&S’s ‘Expedition to the Barrier Peaks.’

I think maybe Runebound could be viewed as a board game version of the old Hex crawl approach to D&D. As devised by Gary Gygax for the original wilderness adventures in Greyhawk. And refined by Judges Guild.

The D&D board games like Ravenloft and Arshadalon, and other games like Dungeon! and Descent (which I’ve not played) are the more common dungeon crawl versions.

Maybe I’ll try a post on that some day.

> Expedition to the Barrier Peaks

I never played EBP, but I was reminded of the same. Insane prices, huh? Excuse me while I check eBay. 😉

Except for the impossible to obtain ‘Midnight’ expansion, ‘Frozen Wastes’ is the hardest to find of the bunch. You will probably do well selling that, if somebody happens to be looking at the moment.

If you want a hex-crawl game, Mage Knight might be worth investigating.

Thanks, Joe. At this stage, I’m lucky to carve out time to play Dungeon! with my 7 year old son.

I’ve heard Mage Knight is a well designed game, though.

Yeah, I’ve only played Mage Knight a couple of times, just the intro scenario and it’s fun but it’s a heck of a commitment.