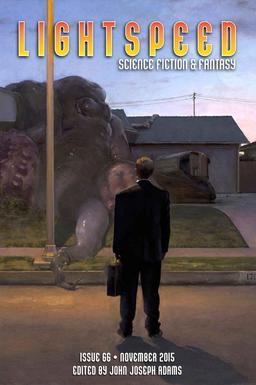 Editor John Joseph Adams shares some good news in his editorial this month.

Back in August, it was announced that both Lightspeed and our Women Destroy Science Fiction! special issue specifically had been nominated for the British Fantasy Award. (Lightspeed was nominated in the Periodicals category, while WDSF was nominated in the Anthology category.) The awards were presented October 25 at FantasyCon 2015 in Nottingham, UK, and, alas, Lightspeed did not win in the Periodicals category. But WDSF did win for Best Anthology! Huge congrats to Christie Yant and the rest of the WDSF team, and thanks to everyone who voted for, supported, or helped create WDSF! You can find the full list of winners at britishfantasysociety.org. And, of course, if you somehow missed out on WDSF, you can learn more about that, including where to buy it, at destroysf.com.

This month Lightspeed has original fantasy from Helena Bell and Kenneth Schneyer, and fantasy reprints by Toh EnJoe and Karen Joy Fowler, and original SF by Rahul Kanakia and Caroline M. Yoachim, plus SF reprints by Brian Stableford and Kameron Hurley. All that plus their usual author spotlights, an interview with Ernest Cline, and book and movie reviews. eBook readers get a bonus reprint of Elizabeth Hand’s novella “The Least Trumps,” and an excerpt from Mira Grant’s novel Chimera.

Here’s the complete fiction contents for the November issue.

“The Black Fairy’s Curse” by Karen Jay Fowler (from Black Swan, White Raven; 1997)
She was being chased. She kicked off her shoes, which were slowing her down. At the same time her heavy skirts vanished and she found herself in her usual work clothes. Relieved of the weight and constriction, she was able to run faster.

“When We Were Giants” by Helena Bell
There was a game we played at my primary school called “Giant in the forest.” Every day, even if it rained, the fourth and fifth grade teachers took us to this small playground with a jungle gym, swings, and a big grassy space where we could run if we wanted to.

“The Plausibility of Dragons” by Kenneth Schneyer (available 11/24)
Of course it would rain. Hungry and footsore after three days of walking, his back and shoulders aching from carrying his heavy pack, all Malik needed now was to be soaked in water that barely resisted becoming ice.

“Printable” by Toh Enjoe; translated by David Boyd (from Granta, 2014)
Sometimes I set stories in San Francisco because I have friends who live there. No family yet, sadly. I like to imagine them reading what I write and maybe smiling. I’m setting this story in Tokyo-Tokyo for the same exact reason. Greg, for one, lives in Tokyo-Tokyo.

“Here is My Thinking on a Situation That Affects Us All” by Rahul Kanakia
I am a spaceship. My insides are oozy, and my outsides are metal. If you were to cut me open with a laser-gun, then it would not precisely hurt, but it certainly wouldn’t be a nice thing to do.

“The Pipes of Pan” by Brian Stableford (from The Magazine of Fantasy & Science Fiction, 1997)
In her dream, Wendy was a pretty little girl living wild in a magical wood where it never rained and never got cold. She lived on sweet berries of many colors, which always tasted wonderful, and all she wanted or needed was to be happy.

“Rock, Paper, Scissors, Love, Death” by Caroline M. Yoachim
Rock crushes scissors. Nicole sat on a crowded bus to Spokane, knitting a turquoise scarf. The gray-haired man sitting next to her stared obsessively at his wristwatch.

Readers of the eBook version also get a reprint of the novella “The Least Trumps” by Elizabeth Hand, and a novel excerpt: Chimera by Mira Grant.

The cover artist this issue is John Brosio (click the image for a bigger version.)

Our November Fantasy Magazine Rack is here, and all of our recent magazine coverage here.