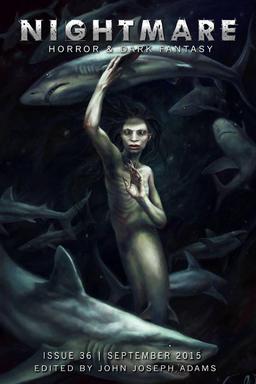 The September issue of the online magazine Nightmare is now available. In his editorial this month, John Joseph Adams justly celebrates his recent awards, nominations, and publications:

In other awards news, the World Fantasy Award nominations were also announced recently, and I’m pleased to report that I have been once again nominated in the “Special Award, Professional” category. I am extremely honored to be nominated again (now for the seventh time overall, including three Anthology nominations), and I will be in Saratoga Springs, New York for the World Fantasy Convention (November 5-8) when the awards are presented (where I look forward to losing to Gordon Van Gelder in person)… And ICYMI last month: Both Lightspeed generally and our Women Destroy Science Fiction! special issue specifically have been nominated for the British Fantasy Award!

Releasing this month, on September 15, is a new anthology I edited called Loosed Upon the World, the definitive collection of climate fiction… Then in October comes the debut of Best American Science Fiction and Fantasy, part of the prestigious Best American series. In it, guest editor Joe Hill and I present the top twenty stories of 2014 (ten science fiction, ten fantasy).

As we’ve noted previously, John Joseph Adams is one busy guy. It’s a full time job just keeping up with him.

“The Sill and the Dike” by Vajra Chandrasekera
Grandmother died when I was seven and aliens raided the village. Their long guns fired out of nowhere, shattering walls and smashing bodies. Father threw me to the floor, shielding me, and I didn’t see Grandmother die, didn’t realize Mother was missing until the raid was over. Father got up and looked outside the house, cautiously; there were shouts of dismay and distress everywhere, and my ears were still ringing from the gunfire. The whole world seemed wreathed in smoke, blurred. My eyes stung.

“Ten Things to Know About the Ten Questions” by Gwendolyn Kiste
They say goodbye. They say it with a strange smile like a kid who overheard a secret. But they don’t share what they know. They just walk out the door. Maybe it’s a cabin door. Or an office door. Or a plain screen door in suburbia. They walk out and they don’t come back. My Uncle Ray’s the first in my family to vanish. It happens in the early weeks when the chattering faces on television and the mindless voices online still claim it’s some newfangled fad that will taper off like acid-washed jeans or hula hoops did.

“Third Wind” by Richard Christian Matheson (from Masques, 1984)
Andy chugged up the incline, sweatsuit shadowed with perspiration. His Nikes compressed on the asphalt and the sound of his inhalation was the only noise on the country road. He glanced at his waist-clipped odometer: 25.7. Not bad. But he could do better. Had to. He’d worked hard doing his twenty miles a day for the last two years and knew he was ready to break fifty. His body was up to it, the muscles taut and strong.

“The Skins” by Reggie Oliver (from The Complete Symphonies of Adolf Hitler and Other Strange Stories, 2005)
I first met Syd and Peggy Brinton in August 1977 on the Sunday after Elvis Presley died. It was a sultry evening at the Pier Pavilion Theatre, Scarmouth, and an argument was simmering before the show in No. 5 dressing room which Victor Bright and I occupied. We had come in early that day to gorge ourselves on images of the doomed star in our shared Sunday papers. Details about hamburgers and drugs, the distended, tawdry glamour of Graceland, were pored over with sickened fascination.

The non-fiction this issue includes the latest installment in their long-running horror column, “The H Word” (“H is for Haunted Houses”), plus author spotlights, a showcase on cover artist Lauren K. Cannon, an editorial, and a feature interview with horror prop shop legends Dapper Cadaver.

Nightmare is edited by John Joseph Adams. This is the 36th issue. Subscriptions are available for just $1.99 per issue, single issues are available in multiple digital formats for $2.99. Purchase copies and sample free content at the website.

The cover this month is by the fabulous Lauren K. Cannon, who also painted the cover of Mike Allen’s The Black Fire Concerto, and whom we interviewed back in 2013.

We last covered Nightmare with the August 2015 issue.