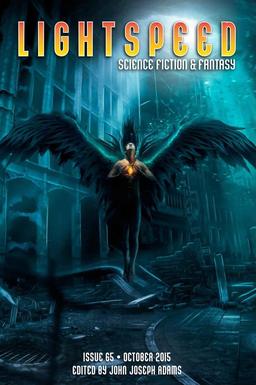 In his editorial this month, John Joseph Adams takes a few minutes to highlight a few of his accomplishments in the past month. It’s an impressive list.

In case you missed the news last month, we won another Hugo!… Lightspeed took home the rocket for Best Semiprozine, but also, just as exciting, there were two other Lightspeed Hugo victories: Thomas Olde Heuvelt’s story from Lightspeed, “The Day the World Turned Upside Down,” won the Hugo for Best Novelette, and one of our illustrators, Elizabeth Leggett, won the Hugo for Best Fan Artist. Congrats to them both, and thanks to everyone who voted for all of us… We won the Hugo for Best Semiprozine last year as well, but most of our team wasn’t able to be in London to accept the award in person (none of us except for our podcast producer, Stefan Rudnicki, were able to make it), so having all of us there in person this year made it extra special for us.

In related news, I also personally won an Alfie Award (for Best Editor, Short Form), a new, possibly one-off award presented by George R.R. Martin. It was created in response to controversy this year over the Hugo nominations… (They’re made out of vintage car hood ornaments, which closely resemble the original shape of the first Hugo Awards.)

This month is the debut of Best American Science Fiction and Fantasy, part of the prestigious Best American series. In it, guest editor Joe Hill and I present the top twenty stories of 2014 (ten science fiction, ten fantasy).

This month Lightspeed has original fantasy from Emil Ostrovski and Nike Sulway, and fantasy reprints by Kevin Brockmeier and Delia Sherman, and original SF by Maria Dahvana Headley and Adrian Tchaikovsky, plus SF reprints by An Owomoyela and Gregory Benford. All that plus their usual author spotlights, an interview with security expert and futurist Marc Goodman, and book and movie reviews. eBook readers get a bonus novella reprint of James Tiptree Jr.’s “Slow Music,” and a pair of novel excerpts.

Here’s the complete fiction contents of the October issue.

“The Fiddler of Bayou Teche by Delia Sherman (from The Coyote Road: Trickster Tales; June 2007)
Come here, cher, and I tell you a story. One time there is a girl lives out in the swamp. Her skin and hair are white like the feathers of a white egret and her eyes are pink like a possum’s nose. When she is a baby, the loup-garous find her floating on the bayou in an old pirogue and take her to Tante Eulalie. Tante Eulalie does not howl and grow hair on her body when the moon is full like the loup-garous. But she hide in the swamp same as they do.

“The Invention of Separate People” by Kevin Brockmeier (from Unstuck #3; February 2014; available 10/13)
Once, not so long ago but before our time, all people were the same person. That’s not to say that they weren’t immersed in their own lives; they were, of course, as people always have been—millions of fish in their millions of bowls. It’s just that they were equally immersed in everyone else’s.

“Tragic Business” by Emil Ostrovski (available 10/20)
Once, an apple named Evan fell in love with a hummingbird, as moldy apples lying in irradiated playgrounds are sometimes wont to do. “I like your wings,” Evan said. The hummingbird briefly landed on him. “You are very warm,” the hummingbird observed, because hummingbirds are, generally, imbeciles. Too much energy spent flapping those pretty wings, too little spent on the brain.

“The Karen Joy Fowler Book Club” by Nike Sulway (available 10/27)
Ten years ago, Clara had attended a creative writing workshop run by Karen Joy Fowler, and what Karen Joy told her was: “We are living in a science fictional world.” During the workshop, Karen Joy also kept saying, “I am going to talk about endings, but not yet.” But Karen Joy never did get around to talking about endings, and Clara left the workshop still feeling as if she was suspended within it, waiting for the second shoe to drop.

“Solder and Seam” by Maria Dahvana Headley
There was a man who built a whale out of wood. He built it in the middle of a field out in the dry country, where nobody bothered him but birds and a couple of farm cats. The whale was white, and it took two years to build. He made it out of planks from old barns, which he stole in the night. He didn’t steal them from anyone who’d miss them. Most people were gone. There were a lot of things falling down.

“Children of Dagon” by Adrian Tchaikovsky (available 10/13)
The south of the city is ours. London Bridge has fallen down, and Waterloo has gone under. Borough, Lambeth, Fulham, these are our places, and east all the way to the sea. Your little island enclaves are almost all gone now. Chelsea and Westminster Hospital’s bleached bones are emptied of you. We starved you out of the Passport Office on Belgrave Road, and when we came in force to the Victoria Palace Theatre you left of your own accord, paddling frantically on rafts made of doors and tables.

“Time Shards” by Gregory Benford (from Universe 9, May 1979; available 10/20)
It had all gone very well, Brooks told himself. Very well indeed. He hurried along the side corridor, his black dress shoes clicking hollowly on the old tiles. This was one of the oldest and most rundown of the Smithsonian’s buildings; too bad they didn’t have the money to knock it down. Funding. Everything was a matter of funding. He pushed open the door of the barnlike workroom and called out, “John? How did you like the ceremony?”

“Water Rights” by An Owomoyela (from Edge of Infinity, 2012; available 10/27)
It was a beautiful explosion, and in a way Jordan was lucky to have such a good seat. She’d been watching the Earth swell up to fill and exceed her porthole, ignoring the thin strand of the space elevator and the wide modules of its ascender until one of them flashed and spilled its guts in a spray of diamonds. The guy next to her, asleep since they crossed inside the moon’s orbit, jerked awake as the skiff fired its slowdown thrusters.

Readers of the eBook version also get a reprint of the novella “Slow Music” by James Tiptree, Jr., and two novel excerpts: Silver on the Road by Laura Anne Gilman and A Borrowed Man by Gene Wolfe.

The cover artist this issue is Blaithiel (click the image for a bigger version.)

[…] hardcover, and $12.99 for the digital edition. You can read an excerpt in the eBook edition of the latest issue of Lightspeed […]