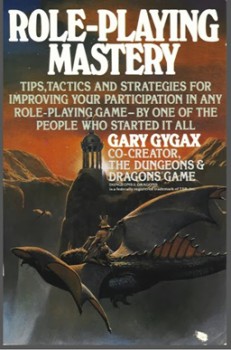 My Dungeons and Dragons roots don’t go back to the very beginning, but I didn’t miss it by much. I remember going to our Friendly Local Gaming Store with my buddy. He would buy a shiny TSR module and I would get a cool Judges Guild supplement.

And I remember how D&D was the center of the RPG world in those pre-PC/video game playing days. And Gary Gygax was IT. It all centered around him. So, I’ve been reading with interest a book that he put out in 1987, less than twelve months after he had severed all ties with TSR.

If you’re reading this post, you probably know that Gary Gygax and Dave Arneson co-created Dungeons and Dragons circa 1973-1974. Unfortunately, it was not a long-lasting partnership and lawsuits would ensue. While both were instrumental in creating D&D, it is Gygax who is remembered as the Father of Role Playing.

In 1987, Gary Gygax put out a book entitled Role-Playing Mastery, which gave guidelines on how to excel as a player in role-playing games. At that time, there were essentially two versions of Dungeons and Dragons. The Original, or ‘Basic’ game, had evolved under Tom Moldvay’s rules development. 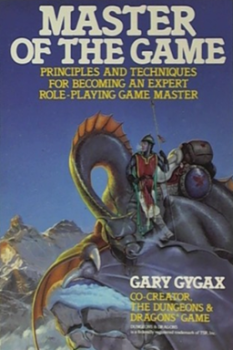 Gygax, meanwhile, was focused on Advanced Dungeons and Dragons, or ’AD&D’. They were marketed as separate rules systems and 2nd Edition AD&D would not be released until 1989.

Gygax had been pushed completely out of TSR (the company he cofounded to print the first set of D&D rules) by December 31, 1986, so he was no longer associated with D&D when this book came out.

In an interview not long before he died, Gygax was asked how he’d like to be remembered and replied:

I would like the world to remember me as the guy who really enjoyed playing games and sharing his knowledge and his fun pastimes with everybody else.

This book, which he wrote about twenty years before his death, reflects that philosophy. On a side note, he wrote a companion book that came out in 1989, Master of the Game, which focused on the Dungeon Master/Game Master side of role-playing.

They are both interesting reads; partly because he takes the subject so seriously. And bear in mind that PC gaming consisted of titles like Ultima IV, Wizardry and Bard’s Tale. Pool of Radiance, the first of the gold box series, was a year away. MMORPGs weren’t even conceived of yet (yes, I know MUDs existed).

But computer gaming was a very different world. People RPGd by sitting around a table together. And Gary Gygax suggested how they could be very good at it.

So I wrote in the first post of a thread over on the Paizo (Pathfinder) message boards in February of 2012. Nearly 300 posts later, we’re closing in on the seventeenth and final step.

I’ve read Role Playing Mastery several times during the life of this thread and there’s MUCH more to it than just the Seventeen Steps. For example, this post listed Gygax’ Outline of Study for Mastery: it’s fine if you don’t have anything else to do in your life! The book talks about problem players, creating characters, making your own rules: basically, you get a chance to pick Gary Gygax’s brain.

Something that really comes through in Gygax’s book is that, regarding Mastery, he’s taking this stuff really seriously. More than any of us gamers do and probably more than professionals in the industry as well. The concepts are interesting to read and discuss, but it’s a very specific issue he’s looking at.  And it comes across as unrealistic today. So, you take the basic premise with a grain of salt.

He doesn’t exactly define Mastery, but this, from the book, seemed to narrow in on it:

As it is with other kinds of mature amusements and diversions, so it is with role-playing games: The higher the level of play, the more enjoyable the game. Simply put, mastery of role-playing is not so much an effort toward individual excellence as it is a broadening of personal knowledge, contributing to social group activity, and increasing the fun and excitement that stem from superior participation.

This is when role-playing becomes captivating. When you master role-playing, you become immersed in an activity that is peerless among leisure-time pursuits. Mastery is achieved by understanding the game system, using it fully and correctly, excelling in operation within the system, and assuring that the experience is enjoyable for all the individuals concerned.

I have found this to be an interesting read: much of it can be examined in light of the very different post-MMORPG, online PbP world of RPGing we currently live in. Much of our discussion in the thread has covered wide-ranging RPG topics, such as options bloat, character creation, Games Mastering, comparisons to MMO gaming and the impact of said gamers coming into the RPG environment, and much more.

If you played Dungeons and Dragons before third edition, I think you should really give this book a read. You’ll find much to think about. And for you relative newcomers, you can get a look into a very different mindset. Either way, it’s the guy who co-created the game talking about how he thought you could become an expert at it.

And swing on over to the Paizo thread: there has been some excellent discussion (mostly from people other than mysef..), including detailed exploration of the Steps. I think your experience of the book will be enhanced by the thread  commentary. Any input you have would be greatly appreciated.

Here are the Seventeen Steps of Role Playing Mastery that Gygax lists:

1. Study the rules of your chosen role-playing game

3. Discover the spirit of the game, and make it your credo in play

4. Know the genre in which the game is set, and study it often

5. Remember that the real you and your game persona are different.

6. Know your team’s PCs and those who play them.

7. Know the campaign in which you play.

8. Understand the role of the game master and assist its fulfillment.

9. Role-play your character fully and correctly.

10. Always seek to contribute the most to the team’s success.

11. Put forth your personal best during play.

12. Play as frequently as possible.

13. Play various characters as often as possible in as many different circumstances as possible.

14. Play outside your group’s campaign frequently.

16. Make yourself aware of the gaming community and contribute to it.

17. Continue to learn and grow even after you achieve mastery

He was an avid collector of Judges Guild adventures and used graph paper to map out every room of Epyx’ Temple of Apshai as a youth.

If you are at all interested in Gygax’s thoughts, there is a LOT of information in this book. Here’s one little snippet I found interesting, in light of the options and rules bloat permeating RPGing today (I say that as a happy Pathfinder player).

“Too often, new material purporting to add to a game system is nothing more than a veiled attempt to dominate the game milieu through power, not skill.

Such creativity, if it can be called that, amounts to a perversion of the game. It is much like cheating at solitaire. Understanding the scope of opportunity offered to PCs by the game system will certainly discourage the intelligent player from such useless activity.”

Of course, it’s also a blatant attempt to expand the game just to make more money..

I also recall him explaining why he would never add gunpowder into AD&D.

Just a lot of interesting thoughts from the man.

After a two year hiatus, I’ve jumpstarted this thread again over on the Paizo boards.

Come check it out and contribute your thoughts!

This post ran on June 2, 2014. I mentioned in the caption for ‘The Illheidren Book’ that I backed Judges Guild’s ‘City State of the Invincible Overlord.’ It was to be delivered in December of that year.

Still waiting for it here on August 31 of 2016. While the project has been snake bit, JG clearly bit off far more than they can chew. I’m just hoping I eventually get the product.