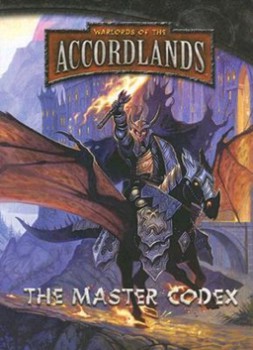 I’m going to try to periodically post some reviews of RPG modules and supplements. If you see “Modular” in the title line, that’s such a post. And here’s one!

Warlord: Saga of the Storm was a d20-based collectible card game from AEG. I’ve never played it and know as much about it as I’ve read on Wikipedia. But I do know that in 2006, AEG released four books that made up a fine d20 RPG setting and campaign.

The World Atlas is the best starting point. There’s a long history of the world of Larisnar, going back to The Great Dragon, which destroyed gods and nations before finally being slain. But the essence of the Dragon escaped into the air and became The Storm. While its body fell deep into the earth and produced demon-like Abyssals. Most of the remaining nations and races signed The Accord as a means to survive the changed world.

The Atlas profiles each of the major nations, including those of the dwarves and elves. As part of The Accord, the Dwarves agreed to leave the surface (the Dragon had destroyed their lands) and head underground to protect against the Abyssals. They stayed down so long that the surface dwellers forgot they existed and their selfless dedication.

Meanwhile, the Elves had become short-lived, barely lasting thirty years, so they turned to necromancy. These ain’t Tolkien’s elves! 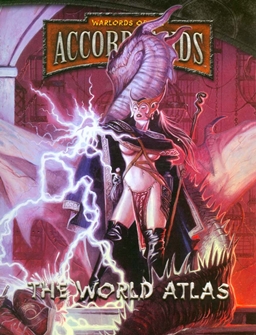 There’s also information on religion, the cosmos, magic items, and notable personalities. Going through this book will let you know whether or not you want to use this world.

The Master Codex is the player’s handbook and the dungeon master’s guide. There are seven races and seventeen classes. Totems, primarily used by the Nothrog, who are sort of advanced Orcs, add a twist to the magic system.

Skills, prestige classes, and equipment: this is pretty standard d20 fare. If you’ve played Third Edition or Pathfinder, you’re not going to have any trouble at all playing in the Accordlands.

Monsters and Lairs is the shortest of the four core books. There’s a mix of the standard (Troll), variants (Abyssals), and new (The Nine Cats of Hell). The templates are rather cool, especially the Severed, which is at the root of the Elves’ uniqueness.

A cool feature is that some of the monsters have mini-adventures included, called lairs. This is a really useful little piece that more monster books should use. I thought I read that the 5th Edition Monster Manual includes some of these. 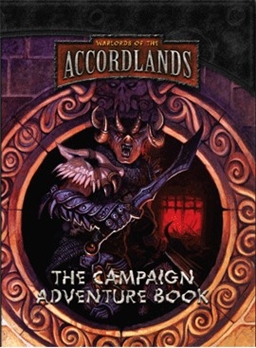 Finally, we have the Campaign Adventure Book, which is essentially the Accordlands Adventure Path. The twenty-five connected adventures follow a story line that will take characters from first level to at least twentieth. The characters are drawn into stopping a worldwide evil conspiracy and generally will end up following one of two storylines (the Dwarven path or the surface world), though they do interweave.

The Campaign Book is black and white: the others, color. There are plenty of illustrations and I like the style, though it’s certainly not groundbreaking.

Warlords of the Accordlands is a bit of oddity in that AEG put out the four core books and that was it: nothing else for this setting was ever produced. It’s available as a pdf, but you aren’t likely to run into too many people who have read the books. And I don’t know anybody who has actually played it.

However, I really like the World Atlas and think that with the Dwarven and Elven variations, plus the political situations, this is a very cool campaign world. In fact, it’s one of my favorites. It is too bad it didn’t get any kind of support.

On RPGMP3.org, there are audio recordings of Bradford Adventuring Guild people’s valiant attempt at the campaign adventure, 105(!) about three-hour sessions of plot dodging, shopping, cake-eating and conspiracies against the party’s Nimbic. I haven’t read any of the books, so it’s hard to say how far off the rails this group was (despite the efforts of the DM…), but I enjoyed the episodes quite a bit.

Thanks @Dr. Inkstain. I’ll check those out.

Arg, I’m not sure how I could make such a mistake, but it’s of course rpgmp3.com, not .org . Sorry for any inconvenience…

Interesting read. If there are more like this in the future, I would really like to hear more about what makes the settings unique and what they are about. When getting interested in a now setting, that’s usualy the most important and interesting part.

@Martin – I’m pretty much winging this at the moment. I want to write some RPG-related stuff, which doesn’t fit in with my Holmes column.

So, the thought is to take a look at some AD&D and third edition products. More nostalgia than anything else. I’ll keep your comments in mind.

For the Accordlands, I was fascinated with the elves, going so far as to make a Pathfinder template for the elven undead: both those who failed and who succeeded.

The World Atlas really is an enjoyable read.

[…] Modular: The Warlords of the Accordlands […]