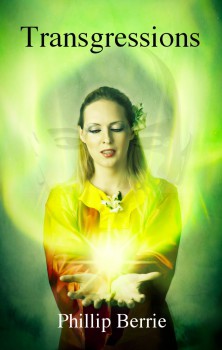 Transgressions by Phillip Berrie introduces us to the elderly wizard Wamzut, who has a problem. His body was destroyed in a mysterious attack in the Golden Void, the space between worlds, and the only thing that’s kept him tethered to his world is his psychic refuge. He’s in need of a body, and the only one available is that of a young half-Alfaren woman named Attina, whose soul has vanished. With limited options, Wamzut takes the opportunity afforded him and starts a new life, calling herself Sarina.

The fact that Attina’s body is half-Alfaren is in some ways more important than it being female. While Wamzut tries to adapt to being female, she hides the fact that she is Alfaren using magic. Alfaren, who are sometimes, but rarely, called elves in the book, are not common, and while there doesn’t seem to be a specific prejudice against them, they’re considered an oddity. Attina’s half-Alfaren nature is particularly well suited to magic, though, as she collects particles of it in her skin. It’s implied that this may give Alfaren enhanced physical abilities, but Wamzut is mostly interested in using it as a reservoir of magic. I was disappointed that Attina’s history wasn’t explored further. What was she doing in Ilbarsis, the city where Wamzut has been the court wizard for decades? What estranged her from her Alfaren father? The novel raised those questions, but never pursued them.

That Wamzut must adapt to a new body, with all the physical and social differences that accompany it, gives the book much of its character, but it’s not really what the story is about. At its heart, Transgressions is a mystery. Who attacked Wamzut? What took Attina’s soul? The two are linked, naturally. The gender change aspect, while a significant part of the story, is more of a plot complication than a driver of it. This is driven home by the fact that Wamzut seems to spend much of his time outside of the new body. With the ability to astral project, he can explore the world, spy on conversations, and pursue the creature of pure spirit that killed Attina and is now targeting him. And since his astral form is based on his self-image, it continues to resemble his old body, at least early on. At no point in the story is any change in Wamzut’s astral form mentioned, though I sometimes wondered if it had changed without being explicitly described.

As you may have noticed, pronouns are challenging for this situation. The author gets around this by writing in first person from Wamzut’s point of view, which makes a lot of sense, but I don’t have that luxury. I’ll keep masculine pronouns for pre-Attina Wamzut, and feminine pronouns for post-Attina, though I may slip into using masculine when I’m talking about Wamzut’s astral projection form.

Since the narration is first person, Wamzut has the burden of describing not just her adventures, but also the society and world in which she lives. This is aided by the fact that Wamzut originally came from our world, and has the birth name of William Ambrose Mannering (if you’re keeping count, that’s the fourth name the protagonist goes by), which gives her an outsider’s view of the world the story takes place in. In some ways, Wamzut’s not very likeable. The old Wamzut was in his eighties and quite cynical, loyal to his friends but not particularly concerned with doing the right thing. The new Wamzut maintains those qualities, and there’s more than one instance where I have to question the wisdom and morality of her actions.

This comes to a head with Nessa, a skilled healer who helps Wamzut claim Attina’s body and adapt to living in it. Nessa is one of the Gifted of Mithra, a member of the dominant religion of the land. Given how essential Nessa’s help is, it’s not surprising that Wamzut is soon head-over-heels in love with her. The feeling appears to be mutual, but Nessa is keeping secrets, and Wamzut soon begins to have doubts about Nessa. But Wamzut sticks by her, loyal even when it means breaking the law and smuggling her out of Ilbarsis. Wamzut brings Nessa with her as she travels to the School of Occult Studies to seek more information about the forces that killed both Wamzut’s original body and Attina’s soul. Protecting Nessa pushes Wamzut further and further along a dark path, using mind control magic and even killing. At times I wasn’t sure whether the author recognized how dark the story was becoming. Reading Wamzut’s viewpoint, all her actions seem justified, but once you take a step back you realize what extremes she’s gone to in order to protect Nessa, when it’s not at all clear that Nessa is as innocent as she seems. Eventually, there are consequences for Wamzut’s foolishness, but there never seems to be much introspection.

The novel ends pretty abruptly, with some mysteries solved (though more by accident than purposely), but with a whole host of others left open. Despite the issues I mention above, I enjoyed the novel. Wamzut’s struggle to adapt to her new life is interesting in itself, but the mystery plot and the dangers it entails drives the story forward, and are where the heart of the story lies.

Transgressions is available from Amazon for $4.99.