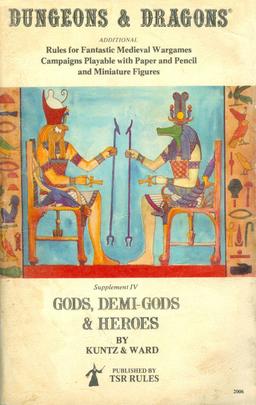 “The “Known World” D&D Setting: A Secret History,” Lawrence Schick’s fascinating look behind the scenes at the home-grown adventure world that eventually became TSR’s famed Known World campaign setting, one of the earliest published settings for Dungeons and Dragons, was our most popular article last month, read by thousands of old school gamers.

Interest in the piece continues to be high and last week James Mishler, who painstakingly produced color versions of Lawrence’s original hand-drawn maps, conducted a detailed Q&A with Lawrence on his blog, Adventures in Gaming V2. The questions range from how much inspiration Tom Moldvay and Lawrence drew from the original D&D supplement Gods, Demigods & Heroes for their pantheon, to the influence of Lin Carter and Michael Moorcock. Here’s a snippet.

You mentioned an “ancient, pre-human civilization.” Do you recall any details about this? Related, do you recall if Tom Moldvay’s creation, the Carnifex of M3: Twilight Calling, were based on the Dragon Kings from Lin Carter’s Thongor series?

The pre-human civilizations were misty, with contradictory legends about them. Tom’s Carnifex were not based on Carter’s Dragon Kings, IIRC. (Neither of us thought very highly of the Thongor novels, though we admired Carter’s work as an editor.)

The influences from Howard, Lovecraft, and Smith are fairly obvious. But what, if any influence of Moorcock can be found in the Original Known World? Were the alignments of the OKW strongly in the Moorcock tradition?

We weren’t all that big on alignment, actually — it seemed to us, even then, to be an oversimplification that was more restrictive than it was useful. Moorcock’s real influence on us was the example of his anti-heroes, which freed us up to put moral choices in the hands of the players, rather than hard-wiring the world into good vs. evil.

More fascinating stuff. Not least of which is the color print of Supplement IV there — I didn’t realize any of the original books had color.