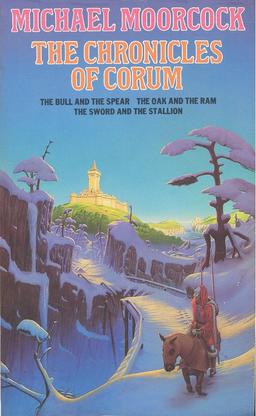 I discovered Moorcock in the late 70s with An Alien Heat, the first novel in a trilogy featuring Jherek Carnelian and the Dancers at the End of Time. I discovered Elric shortly thereafter. But the other incarnations of his famous Eternal Champion — including Jerry Cornelius, Dorian Hawkmoon, and Corum — managed to escape me. Lately, however, I’ve been growing increasingly intrigued by The Chronicles of Corum, partly triggered by Fletcher Vredenburgh’s comments in his review of the entire series, “The Shout of a Young Man Who Finds the World a Complicated Place: The Eternal Champion by Michael Moorcock.”

Most preferred the morose albino, Elric, of doomed Melniboné. Dressed in black armor, wielding the evil soul-drinking sword Stormbringer, and riding a dragon — I totally get it. A few liked Dorian Hawkmoon von Koln and his adventures across post-apocalyptic Europe and America better. Personally, I did and still do enjoy the two trilogies about Corum Jhaelen Irsei, last of the Vadhagh. Steeped in Irish myth and a gloomy Celtic miasma, I think they’re the most intense and beautiful books in the series.

The two trilogies Fletcher’s talking about are The Swords Trilogy, which gathered the first three Corum novels, and The Chronicles of Corum, which collects the last three. I frequently find these books referred to as perhaps Moorock’s most enduring works. Here’s Tor.com writer Tim Callahan, quoted from as part of our Appendix N series, in “Andre Norton, Michael Moorcock and Appendix N: Advanced Readings in D&D“:

I read The Swords Trilogy and The Chronicles of Corum early, and they made an impact. They exploded inside my mind in a way I have never forgotten… I didn’t really feel like I tuned into Elric until halfway through the first reprint volume, when we get the four novellas of Stormbringer…

The Swords Trilogy was published in August 1977, and gathers three books: 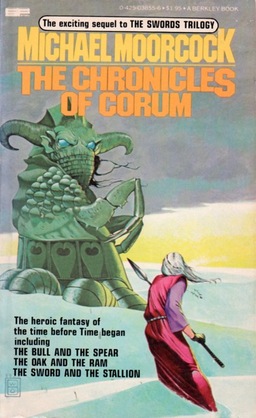 The second trilogy is known as The Chronicles of Corum; it collects:

It’s probably too ambitious an undertaking for me to tackle all six novels in the series any time soon (but the next time I’m stranded on a desert island, for sure.) However, these novels were published individually, and picked up and enjoyed out of order by countless fantasy fans, so the temptation is strong to dip into The Chronicles of Corum, right in the middle of the saga, and see where it takes me.

The volume above right is the first UK omnibus edition, published by Grafton in 1987. Here’s the brief blurb on the back:

Corum of the Silver Hand had slain the gods that Man might rule, and he had earned his rest. However, now the task falls upon him to defeat the mighty Fhoi Myore, the gods who yearn for death but can not be slain.

In the US, the first omnibus edition of The Chronicles of Corum was released by Berkley in August 1978, with a cover by Wayne Barlowe and a $1.95 cover price (right; click for bigger version.) Both are handsome editions, but given a choice I prefer the Grafton paperback.

The Chronicles of Corum was published by Grafton in October, 1987. It is 454 pages, priced at £3.50 in paperback. The cover is by Mark Salwowski.

And all six novels are being reprinted by Titan this year. Just do a “Moorcock” search under Books in Amazon and sort by pub. date. You’ll see them.

The first three Corum books are among my favorite Moorcock stuff. The second trilogy was ok, but I thought a step down.

I read all six in one week, slumped in the back row of my high school English class. Those were the days, my friends…

Yes, it’s six novels, but it’s six 150 page novels — I’d wager the word count for the entire Corum series is on a par with, or less than, the average Wheel of Time book. Join us. Jooooiiiinnnn uuuuussss …

You do want to read the trilogies in order, though, and probably read the Swords trilogy before the Chronicles. Although that part’s more negotiable …

> And all six novels are being reprinted by Titan this year. Just do a “Moorcock” search under Books in Amazon and sort by pub. date. You’ll see them.

Right you are. Looks like Titan is reprinting the entire ETERNAL CHAMPION sequence – at least, the major books (everything tied into Moorcock’s Eternal Champion sequence, eventually).

The Knight of Swords is due on May 5, 2015, and they’re doing a book a month after that. Here’s the first one:

> The first three Corum books are among my favorite Moorcock stuff. The second trilogy was ok, but I thought a step down.

Hmm. Okay, I’ll have to start with the first one. You talked me into it.

> I read all six in one week, slumped in the back row of my high school English class. Those were the days, my friends…

At least you were reading!

> Yes, it’s six novels, but it’s six 150 page novels — I’d wager the word count for the entire Corum series
> is on a par with, or less than, the average Wheel of Time book. Join us. Jooooiiiinnnn uuuuussss …

That’s true. Last night I picked up a copy of ELRIC OF MELNIBONE, and before I even know what had happened, I had finished almost half the book. Moorcock certain knew how to put together a quick read!

I remember being so in thrall to the Corum books in my last year of high school that I one day wrote Corum’s full name on the blackboard before class. A friend of mine, a fine Christian fellow, looked rather alarmed at me no doubt thinking I perhaps had finally given in to some form of Satanism!

I was in a second hand bookshop last weekend and paged through a couple of Dorian Hawkmoon books. One forgets how short they were – about 120pp!

I must dig out my copies and have another read…

A book you might check out is ‘Tales of the White Wolf.’ It’s a bit hit and miss (as most multi-author anthologies are), but it’s 500-plus pages of various incarnations of the Eternal Champion.

[…] Vintage Treasures: The Chronicles of Corum by Michael Moorcock […]