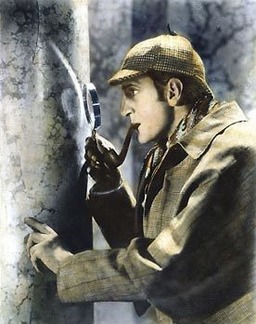 I started out with  a Holmes on Screen website many years ago, about the great detective’s appearances in film and on tv. Later, I added stage performances.  Eventually I took it down and moved on to Solar Pons, but I never lost my interest in the subject matter, and over the years, I’ve written over two dozen posts about Holmes on small and big screen. So, I figured I’d put up one post with links to all of them. I go all the way back to 1900’s Sherlock Holmes Baffled, right up to BBC Sherlock and Elementary. I happen to think there’s some pretty neat stuff mixed in here. Pick a topic and do a little reading!

His ‘The Public Life of Sherlock Holmes’ column ran every Monday morning at Black Gate  from March, 2014 through March, 2017 (still making an occasional return appearance, like today’s!).

A few years ago I invested in the MPI Complete Sherlock Holmes Collection on Blu-ray, which collects all 14 Basil Rathbone/Nigel Bruce films. Best money I ever spent.

Thomas – The quality of those restorations on the MPI releases is wonderful!

I actually don’t mind the colorizations. I saw one recently for The House of Fear, which is one of my favorites in the series. It was fun.