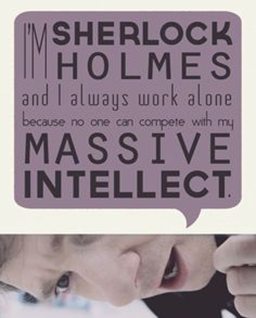 Sherlock Holmes was rather a jerk. His people skills needed some serious work. It’s blatantly obvious in Benedict Cumberbatch’s over-the-top obnoxiousness in BBC’s Sherlock, but it’s all over the Canon as well. I wrote about his unwarranted negative attitude towards Dr. Watson’s detective work in a previous post. And the Canon is replete with snide comments and remarks at Watson’s expense: to say nothing of the official police force’s!

“Come at once if convenient – if inconvenient come all the same.”

Thus does Sherlock Holmes summon Watson in “The Adventure of the Creeping Man.” And Watson obeys. We get a sample of Holmes’ imperious attitude from this quote. But Watson’s response is also rather telling.

When Grimesby Roylott of Stoke Moran confronted Holmes, he referred to the detective as a “meddler, a busybody and a Scotland Yard jack-in-office.” One has to wonder if some villain or policeman in the Canon didn’t refer to Watson as Holmes’ lapdog, lackey or errand boy?

There are multiple examples throughout the Canon of Watson abandoning his wife and his practice to rush off with Holmes: often at a moment’s notice. If Holmes gives Watson a compliment, it is with the back of his hand, as when the detective points out that Watson wasn’t very bright himself, but he stimulated Holmes’ own luminous intelligence. Gee, thanks!

This line of discussion is often refuted with, “Yeah, but look at how worried Holmes was when Watson was shot by Killer Evans in “The Three Garridebs.” If the bar is being concerned when a friend is shot, I think we’re aiming a little low here.

And who can forget “The Devil’s Foot,” a case in which Holmes nearly gets Watson (and himself) killed through a reckless experiment. A woman has died and two men have been driven insane through exposure to the devil’s foot root. So naturally, Holmes decides to test the drug on himself and Watson; without informing the latter. They are almost immediately overcome and had Watson not fought through its effects, the two men would have at the least been driven insane: possibly killed.

Having barely escaped, Holmes apologizes and thanks Watson. Is the doctor indignant? With abuse of various kinds heaped upon him year after year in his association with Holmes, does he finally criticize Holmes? Nearly debilitated, does he voice his protest at Holmes? Heck no. He is overcome with emotion and replies, “You know, that it is my greatest joy and privilege to help you.”

Good lord, man. Holmes has nearly killed you. At least raise your voice! Yes, Watson was a faithful companion. But to the outsider, who sees Watson in person during an investigation or only knows the good doctor through the stories he publishes, Watson must appear as a bit of a toady.

He is a wounded war veteran and a doctor. He has proven his intelligence and valor. But as Holmes’ assistant and chronicler, he is insulted, belittled, recklessly endangered and deceived by Holmes. Watson may well have been a man of strong character, but in his role of Sherlock Holmes’ number two, he is treated more like an acquiescent sycophant. And a willing one, at that!

Perhaps it was inevitable, though.. He actually supports Holmes’ ‘luminous’ observation with, “If I irritated him by a certain methodical slowness in my mentality, that irritation served only to make his own flame-like intuitions and impressions flash up the more vividly and swiftly.” Yeesh!

However, we finally see a trace of Watson’s resentment about Holmes’ attitude towards him in that same “The Creeping Man.”

As mentioned above, Holmes has summoned Watson with the “Come at once if convenient – if inconvenient, come all the same,” telegram.

Most people would not dream of asking a favor of someone in such peremptory tones. At least, most who are not jerks. Watson then follows up with a description of how he has become one of Holmes’ habits, comparable to the detective’s pipe and index books. He even comments on how easy it is for a loner like Holmes to run off to Camford, while Watson has responsibilities to take care off before he can dash away. This sounds like a man who has grown tired of being Holmes’ assistant.

Watson arrives and is greeted with a rather condescending wave of the hand and then sits for thirty minutes, unacknowledged by Holmes. Presumably he found something to amuse himself with, as opposed to just sitting there, bored. So, to summarize, Holmes orders Watson to immediately come to Baker Street, which the good doctor does. Once there, Holmes ignores him for a half hour. What an ass.

Finally, Holmes greets his visitor, managing to work in a snide remark about Watson’s account of “The Copper Beeches.” A bit of conversation results in a question posed by Holmes: why did Professor Presbury’s dog bite him?” We see a spark ignite in Watson’s mind that has been absent for fifty-five previous cases.

”Was it for so trivial a question as this that I had been summoned from my work?”

Finally, Watson is more than a docile follower of Holmes. Umpteen times he has put aside his practice, his wife, or both, to rush off on some adventure with Holmes. But now, his first instinct is that Holmes has bothered him with something less important than the doctor’s medical practice. Hooray for Watson!

Great post as usual. I’ve often thought that some of the portrayals of Watson on the screen (not Nigel Bruce, obviously) have done him more justice as a rational human being than we see in the Canon. Of course, if an actor has to base his portrayal on the Canon, he doesn’t have a lot of scope, does he? Both Martin Freeman and Lucy Lui have done some interesting work, I think.

I get that Nigel Bruce as a doofus was a valid movie portrayal – it offered some comic relief in the script and gave the actor some range.

And a milquetoast Watson would be boring to play.

So, an onscreen Watson who is smart (the guy is a doctor) but not a genius, while being a loyal helper, can be a mix between the Canon and a satisfying role for an actor.

Somewhere down the line, I’m going to do a post on one of my favorites, ‘Without a Clue.’ A very intelligent Watson has made up Holmes for the stories and they become so popular he hires a drunken actor to be the real Holmes Watson (Ben Kingsley) guides Holmes (Michael Caine) through the movie, facing off with Moriarty. I think it’s hilarious.