Season three of BBC’s Sherlock was an absolute train wreck, destroying what had been a great show. Then The Abominable Bride took the long-awaited Victorian-Era Cumberbatch/Freeman episode and turned it into some stupid psychological modern day shlock involving the dead, giggling Moriarty.

So, season four finally arrived, just shy of three years since season three ended. And you know what? The Six Thatchers wasn’t a disaster. It wasn’t up to the standards of the first two seasons, but it was better than season three.

In a recent interview, Steven Moffat said, “Mark Gatiss and I do not have the delusion that we know better than Sir Arthur Conan Doyle. That’s how the show works and always will. We reset to the most traditional and famous version of the format.”

And it was exactly when those two thought they knew better than Doyle: when they wrote episodes that alternately pandered to new generation fans and saying ‘look at how smart and clever we are’ (I’m talking about you, season three) that a great show turned to crap. Season three was all about the creators patting themselves on the back and showing how much they didn’t need Doyle to make a Sherlock show. And they lost a huge part of the original fan base in doing so.

So, it was a divided fan base that tuned in for The Six Thatchers – obviously drawing on Doyle’s tale, “The Six Napoleons.” Holmes’ murder of Charles Magnusson at the end of season three is wiped away with some creative video editing and Holmes is free to go back to work. Which he does, as Moffat and Gatiss toss in several references to the Canon, including Jabez Wilson, the Lion’s Mane, Wilson the Canary Trainer, The Engineer’s Thumb, Toby the bloodhound and Agra. I even heard Porlock mentioned. And it was amusing to see Holmes use ‘You see but you do not observe” on the baby.

Doyle originally planned on calling Sherlock ‘Sherrinford,’ and William Baring Gould dubbed Sherrinford the eldest Holmes brother. It was intriguing to see Mycroft making a call to someone of that name.

The Canonical references were cleverly done and were a flashback to the first two seasons. They were the highlights of the show.

As for the plot – It was more Jason Bourne than Sherlock Holmes. Holmes didn’t do a whole lot of detecting (a major problem with season three). He was fed information via monologue and we saw lots of flashbacks. This was more of spy thriller than a mystery case.

This series made Mary Watson prominent. And while you can have Mrs. Hudson and Inspector Lestrade and Mary Watson: it has to be about Holmes and Watson.

Mary can’t be front and center. So, they got rid of her, which had to be done. Doyle learned the same thing and wrote her out (it’s assumed that she died, though Doyle never explicitly states so). Sadly, one-third of the season was spent tying up that story line. Now, we’ve only got two episodes left for some Holmes deducing.

Watson is pissed at Holmes because the latter promised he could protect Mary (though she ended up protecting him) and he failed miserably. So, that friendship has two episodes to get somewhat restored (I’m not counting on season five for now). Hopefully there will be more deducing than bromancing in the coming episodes. Watson’s illicit text-mance with some woman he saw on the bus is completely out of character, bizarre and unexplained. Surely there’s more to come with that. 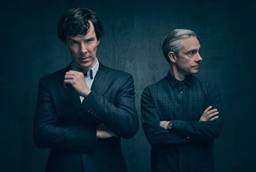 The first two seasons were excellent television. Season three was garbage that would get most shows cancelled. Season four’s first episode is in between. It felt more like a BBC spy miniseries (though not a particularly good one) than a Sherlock Holmes episode. Something ‘meh,’ but after The Abominable Bride, that’s progress.

If the next episode can combine the non-self-absorbed Canonical references of this one with a plot involving Holmes deducing and solving a crime (and PLEASE – no more of the worst Moriarty we’ve been given), the rating could move up to good. Something I doubted Moffat and Gatiss would ever bother trying for again.

And speaking of the next episode: We know that Culverton Smith and a story based on “The Dying Detective” is coming next week. Semarang and Sumatra are in Indonesia. I still don’t know what that story that book ended the episode was about, but is the Indonesian reference a tie-in to next week’s episode, The Lying Detective?

It was interesting to see Sherlock copy Elementary. Johnny Lee Miller’s Holmes taunts a villain who then pulls a gun and fires. Detective Bell jumps in front and takes the bullet, just as Mary does to save Holmes.

Also, Miller’s Holmes attends meetings that are the Alcoholics Anonymous equivalent for drug users. Cumberbatch’s Holmes sees a counselor at the end of this episode. Both Holmes’ need help from the outside and go to counseling/support providers.

Well – The Six Thatchers was the best episode since The Empty Hearse nearly three years ago. It was far from the brilliance Sherlock once had, but it also didn’t make me want to turn off the television, so it’s progress.

And, having just finished watching ‘The Lying Detective’ (which did a decent job of adapting one of the Canon’s weakest stories), my hopes have been dashed. A ridiculous ending as Steven Moffatt falls into the cleverness trap again.

I can’t believe I let them fool me with episode one.

It’s just not very smart. And it’s hard to write stories about a really smart man if the writing itself isn’t very smart. The absurd leaps of logic, the things that NO ONE rational would ever suggest or follow up on solely to move the plot forward (I refer to Mary Watson’s recorded plan and Holmes carrying it out), the absurd level of interconnectedness, the whole stupid villain and how obvious he was… Blech.

I’m done. I was pretty much done after the big middle finger they gave us to conclude the cliffhanger ending of season 2, which basically said: “we’re so clever we don’t really need to explain what happened. Here, have more cleverness and bask in how awesome we are.” I can’t believe I bothered watching episode 2 after the nonsense I caught in the first one of the season, which I have to admit I walked out on.

I havent watched the 2nd episode yet.

I like the Six thatchers fr about half. I think they try to stuff to much in one episode now: The relationship and (in Thatchers) Mary background, Foreign policy, agents… The actual cases are forgotten. The best episodes focused on the case. The problem is that Sherlock is so clever its hard to build a case that he doesnt solve in the first three minutes (The main case in Six Thatschers was solved within minutes) but thats what writers are for…

Peer – The case is somewhat front and center in The Lying Detective, but as you mentioned, there is so much other stuff going on it’s a mess.