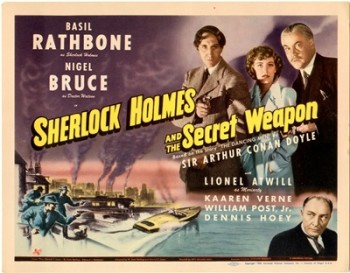 It’s reported that in early 1939, movie mogul Daryl Zanuck was at a party when a friend suggested that someone should make movies out of Sir Arthur Conan Doyle’s classic detective stories. Zanuck liked the idea, but wondered aloud who should play Holmes. The friend, writer Gene Markey, replied “Basil Rathbone” without hesitation. He then added that Nigel Bruce would make a perfect Watson.

Shortly thereafter, the duo began filming The Hound of the Baskervilles, followed quickly by The Adventures of Sherlock Holmes. Rathbone’s Hound is still considered the standard, nearly seventy years later. Both, released in 1939, were set in Victorian London, as opposed to the popular Arthur Wontner films of the thirties, which were Edwardian in design.

Surprisingly, Fox decided to pull the plug on the series. Rathbone kept his magnifying glass handy, however, as he and Nigel Bruce were starring as Holmes and Watson in a very popular radio series.

The first three Holmes films at Fox were Word War II thrillers. This isn’t a huge surprise, as the planet was aflame. While the two Fox movies could be seen as reassuring, British escapist fare, a money-focused studio could also look at them as quaint and irrelevant. Holmes fighting evil and bucking up nations entrenched in the good fight made commercial and patriotic sense.

And…contemporary settings would be less expensive than Victorian ones. Today, we’re used to seeing Holmes in a variety of times, including the future. But not everyone felt that way in 1942. Here’s Lionel Collier in Picturegoer:

Not that Basil Rathbone is not well suited to the role. He is, and would make, an ideal Holmes if the plays were put in period instead of being rather ludicrously brought up to date.

Needless to say (but I’ll say it anyways), that particular objection did not hold back the series, as Rathbone remains immensely popular as Holmes to this day.

That first film, Sherlock Holmes and the Voice of Terror, is basically an action spy flick. While it’s good to see Rathbone, who had an impressive resume (seriously: go to imdb.com and look up what he did in the thirties) before taking on the role of Holmes, it’s not much of a detective movie.

Fortunately, he gets to do more detecting in the follow-up, Sherlock Holmes & the Secret Weapon. Bad old Professor Moriarty is after a new bombsight that would greatly increase the effectiveness of bombing raids. He wants to sell it to the Germans, which would have huge implications for the war. Holmes is on the case, of course.

Kaaren Verne was a Berlin-born stage actress who fled the Nazis in 1938 and began making movies in England. Verne had the female lead in one of my favorite Bogart films, All Through the Night. She was so taken with co-star Peter Lorre in that film that she divorced her husband (who she had left Germany with), left their son and married the undersized star.

She put her career on hold for the stormy, five-year marriage. After it also ended in divorce, she tried to get her career going again, but her time had come and gone and she was effectively done as a star.

She plays Tobel’s girlfriend and doesn’t really contribute much to the film. I don’t think she’s a particularly good actress, so this isn’t a surprise.

Atwill was credited ahead of Rathbone in Captain Blood and both appeared in Son of Frankenstein.

Now, there are going to be spoilers. But I’m talking about a 73-year-old film. I’m not sorry if I give something away here. That’s your warning.

When we first meet Rathbone, he is disguised as an elderly German book seller. It’s a pretty good disguise, too! He fools a couple of German agents and ends up escorting a scientist, Dr. Franz Tobel (William Post Jr.), to a waiting RAF plane and out of Switzerland and on to England. 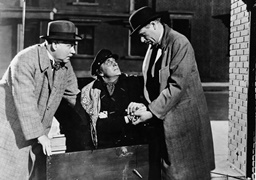 They sneak into 221B Baker Street (surrounded by sandbags for air raids), where Nigel Bruce’s Watson already begins looking like a buffoon. Holmes places him on guard duty. Of course, he falls asleep and Tobel sneaks out to visit his girlfriend, Charlotte Eberli (Verne).  Holmes returns and wakes up a useless Watson. Tobel had been attacked but rescued after leaving Eberli’s apartment and returns to Baker Street.

The bombsight’s test is a smashing success, but Tobel says he will oversee the development of it and refuses to turn it over to the authorities. He immediately splits the weapon into four parts, distributes them to different Swiss scientists in London, then disappears.

Holmes uses another disguise and arranges an encounter with Moriarty, who puts him in the bottom of a false chest and is going to have him dropped into the sea. Surprisingly, Watson saves him, with a clueless Inspector Lestrade (played by Dennis Hoey throughout the series) along. Shades of “The Disappearance of Lady Frances Carfax!”

Holmes cracks a secret code, consisting of stick figures (you know that story, right?) and when Moriarty kidnaps the fourth and final Swiss scientist, it’s actually Holmes – disguised again. Just like in a Bond film, instead of simply killing Holmes and being done with it, he lets Holmes trick him into slowly draining the detective’s blood until he dies. Naturally, the rescue party arrives before this slow death can come to pass. 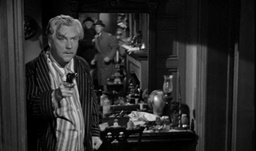 Moriarty tries to pull a fast one, Holmes catches him and Moriarty (presumably) plunges to his death through his own trap door. The film finishes with a patriotic speech from Holmes. Rathbone’s precise delivery serves quite well for this sort of thing.

This isn’t a great story. But Rathbone (who was born in South Africa) in his fourth turn as Holmes, is about as good as it gets. His tall, lean physique, his deliberate delivery and energetic performance are all what we look for in a Holmes. Arthur Wontner had been a popular movie Holmes (and is one of my favorites), but his was a rather plodding, intellectual portrayal. Of course, he was 57 when he first donned the deerstalker. Rathbone, (a younger-looking 47 when he made Hound) gave viewers a more vibrant Holmes.

Nigel Bruce would become more of a doofus as the series progressed, playing the comic relief role. It’s not quite as pronounced in this early effort, though he’s mostly dead weight. I’m not a fan.

Roy William Neill took on Director duties and would run the ship through the end of the series. He was a quick, competent Director who made good use of shadows and camera angles. I happen to think that after Rathbone, Neill is the most responsible for the quality of the series. Neill made one more film after Dressed to Kill. He then made one more film, bought his dream home in England (he had been born in Ireland), stepped into said home, and dropped dead of a heart attack. Poor guy.

The next film, Sherlock Holmes in Washington, brought the dynamic duo to America. That would be the last war propaganda piece. Sherlock Holmes Faces Death, the fourth movie (and one of my favorites) takes place at Hurlstone Towers, which has been converted into a convalescent home for injured soldiers. That movie is based on “The Musgrave Ritual” and we would get more ‘detective Holmes’ for the rest of the series.

Because of the somewhat lame story and Verne’s lackluster performance, The Secret Weapon isn’t among my favorites. Still, Rathbone is fine and it’s worth watching for the Holmes fan.

I am a classic movie buff, and I appreciate black and white. But I will add that this movie is one of the four Holmes films colorized by Legend Films and they did a nice job. I enjoy this in color as much as I do the original black and white.

I’m going to be writing more posts on Rathbone’s films and I’ll be spreading out tidbits here and there. Such as Rathbone played Holmes on radio, on the big screen, on stage, on television and on record!

Prior posts related to Holmes on screen:

I enjoyed this series (I even have the box set) and actually think the switch to wartime England works fine. Rathbone is perfectly cast (he was lucky that he could play a character like Holmes, while a simple black moustache instantly turned him into your standard matinee villain – talk about having the best of both worlds!) – but I wonder how much this cinematic incarnation of Holmes owes to Sexton Blake? I never read many Sexton Blake stories, but the few I did read reflect the mood of these films pretty accurately.

I never read any Sexton Blake. Like Philo Vance, he lost popularity over the years.