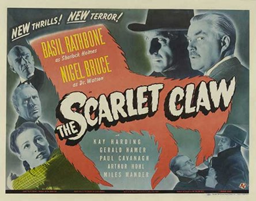 We’re back with more Basil Rathbone again this week. Of course, you read last week’s essay about Sherlock Holmes & the Secret Weapon. This week, it’s a look at The Scarlet Claw, which seems to be considered the best of the Universal films (though it’s not my favorite).

First, let me mention the restorations done for the Rathbone films. The UCLA Film and Television Archive has restored over 700 movies and television shows, including all 14 of the Rathbone/Bruce films. I had bad VHS copies of this series and UCLA did a phenomenal job in restoring them. They are a treat to watch.

They also include commentary tracks – some by Holmes author and expert (and my former editor) David Stuart Davies. These DVDs have become more affordable over the years and I highly recommend purchasing these over cheaper, much lower quality discs. Trust me. I used to run the HolmesOnScreen.com website, you know!

Moving on: We can divide Basil Rathbone’s movie career as Holmes into three phases. The first encompasses the two films from Twentieth Century Fox: The Hound of the Baskervilles and The Adventures of Sherlock Holmes. Both of these were set in Victorian England and Rathbone dons the deerstalker and Inverness cape.

Next are the first three Universal films. In Sherlock Holmes & the Voice of Terror, SH & the Secret Weapon and SH in Washington, the great detective is aiding the war effort. These three are more patriotic spy flicks than typical Holmes fare.

Finally, we have the remaining nine Universal films in which Holmes is back to just being a detective – albeit in what was then modern times: the forties. The quality of the scripts varied, but the non-war movies have definitely aged better and are more suited for repeat viewings. 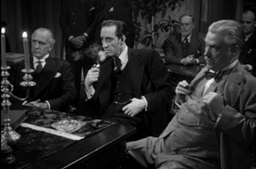 Scarlet Claw is the sixth Universal Holmes film and Rathbone’s eighth as the great detective. It was originally to be called Sherlock Holmes vs. Moriarty. However, when the professor was dropped from the script, it became Sherlock Holmes in Canada. Finally, The Scarlet Claw stuck.

Holmes and Watson are in Quebec, Canada, as skeptics at a convention of the occult. While there, Lord Penrose, a believer, is told that his wife has been murdered in their nearby village of La Mort Rouge. Her throat has been torn out, furthering rumors that a monster is on the loose. She had sent Holmes a letter that he received just after news of her death, saying that she felt she was in danger (perceptive woman). Holmes and Watson head off to try and solve the case.

Many members of the cast appeared in other films in the series. The patrician Paul Cavanagh (Lord Penrose) was also in The House of Fear and The Woman in Green. Ian Wolfe (Drake) appeared in SH In Washington and The Pearl of Death. Arthur Hohl (Emile) had been previously seen in The Adventures of Sherlock Holmes. Gerald Hamer (Potts) was all over the series, acting in SH In Washington, SH Faces Death, Pursuit to Algiers and Terror By Night.  And Miles Mander (Judge Brisson) not only popped up in The Pearl of Death, but he was also in Arthur Wontner’s lost film, The Missing Rembrandt.

Bruce’s Watson is clueless, as usual. He has no idea that Holmes is using him as a distraction while the detective is off working on the case. The doctor blusters his way along while Holmes is in crime-solving mode. 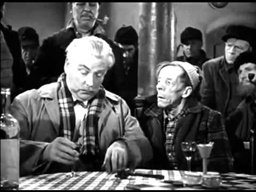 Watson, drunk, references a G.K. Chesterton Father Brown story that actually mirrors what’s going on, but he totally misses the connection. He rushes off to “save” Holmes in the swamp and of course, completely makes a hash of it. And Watson falling down the stairs when he comes to assist Holmes in the abandoned hotel is just more of him being a buffoon. As usual, I find myself wondering why Holmes saddles himself with this dead weight assistant.

Rathbone is typically fine as Holmes. He just looks and sounds like the great detective should. Unfortunately, in nailing the part as he did, Rathbone grew tired of Holmes and quit the films and radio shows when his contract expired (causing a temporary rift with Bruce), In his autobiography he said,

I wouldn’t say this was one of Holmes’ greatest successes, as after he identifies the murder weapon, three people are killed before he stops the villain.

The Hound of the Baskerville & “The Sussex Vampire” are mentioned by Watson, who is rambling and is cut off by Holmes. There are a couple of elements in the film that draw on The Hound, such as Holmes stalking the killer in the foggy swamp.

The Scarlet Claw is a horror movie at heart, and the black and white photography (always solid in the series) contributes to the mood.

“Canada, the lynchpin of the English-speaking world, whose relations with the United States on the one hand, and the British Commonwealth and the Motherland on the other. Canada, the link that joins together these great branches of the human family.”

Something to remember when watching these Rathbone/Bruce movies is that they were B picture. They were made quickly and cheaply. Scarlet Claw was just one of three in the series released in 1944. The quality of the acting and the cinematography in these Holmes movies was quite good for the class. They hold up better than most B pictures cranked out during the era and are much more like A releases.

I’d guess that the next Rathbone post will tackle one of the Fox movies.

Prior posts related to Holmes on screen:

I agree the UCLA Film School did an excellent job with the remastering, those DVDs are well worth the reasonable cost.

Scarlet Claw has long been a favorite of mine since I first saw it on late television in the late 1960s. I know it’s not the “best”, but it’s very entertaining, and I’ve watched it many times.

So, Rathbone grew tired of portraying Holmes once he had mastered the character? Not surprising.

But Bruce wanted to continue the buffoonery? Did he ever express his thoughts and feelings about the rather cartoonish Watson he was playing?

Like Leonard Nimoy wit Spock, Rathbone felt typecast and ‘stuck.’ Looking at his career, it was a fair assessment. Of course, Holmes is his enduring legacy and it’s a well respected one.

In 1951, he would appear as Holmes in a “lost” television episode, The Adventure of the Black Baronet, based on one of Adrian Conan Doyle’s stories.

In 1953, he also starred in a play written by his wife. It was cancelled after only three performances.

Bruce would play Watson on radio for several more years. I don’t think he objected to playing a doofus Watson, but that’s a vague memory. If it’s accurate.