No, no. Not the Al Pacino gangster classic directed by Brian De Palma. I mean the 1948 pirate novel, whose full title is Scarface, being the story of one Justin Blade, late of the pirate isle of Tortuga, and how fate did justly deal with him, to his great profit.

Scarface was published early in her career. Like, very early. It was her fifth novel, written four years before her first science fiction novel, Star Man’s Son, 2250 A.D (1952), and decades before she became the first female SFWA Grand Master in 1984. But it was very well received, getting a starred review from Kirkus Reviews, among other accolades, and eventually being reprinted in a beautifully designed paperback edition from Comet in September 1949 (above). The Comet paperback was copiously illustrated by Lorence Bjorklund — see below for a sample of some of the eye-catching interiors. 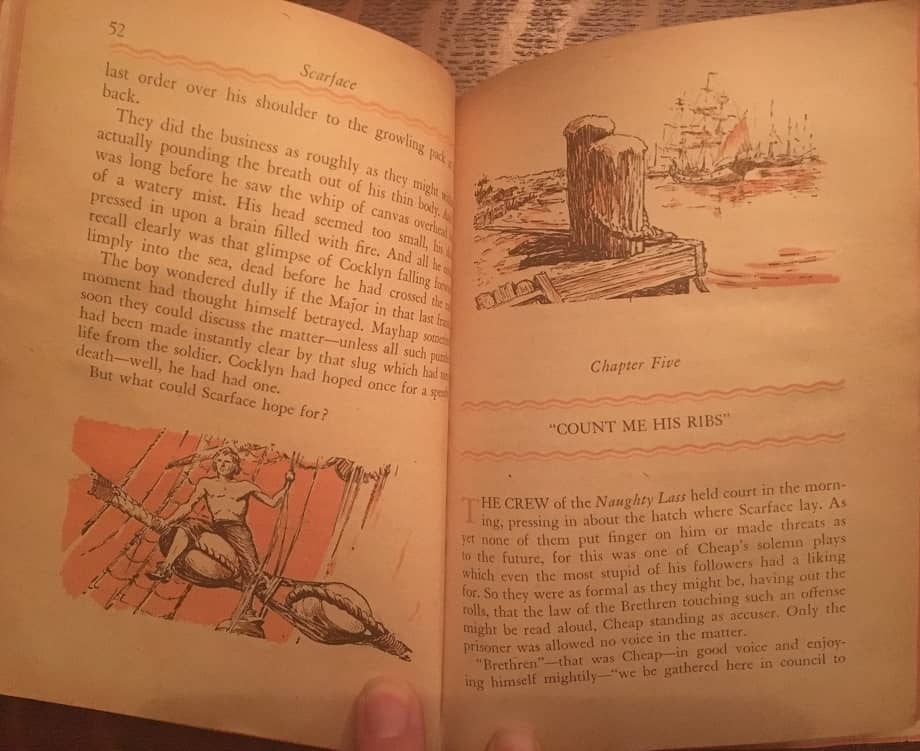 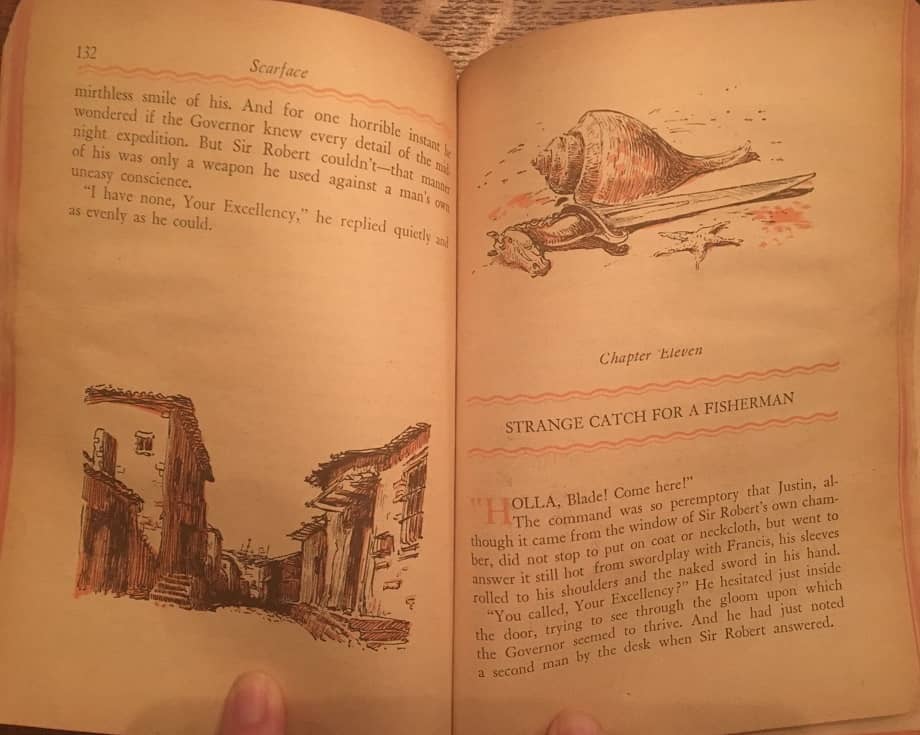 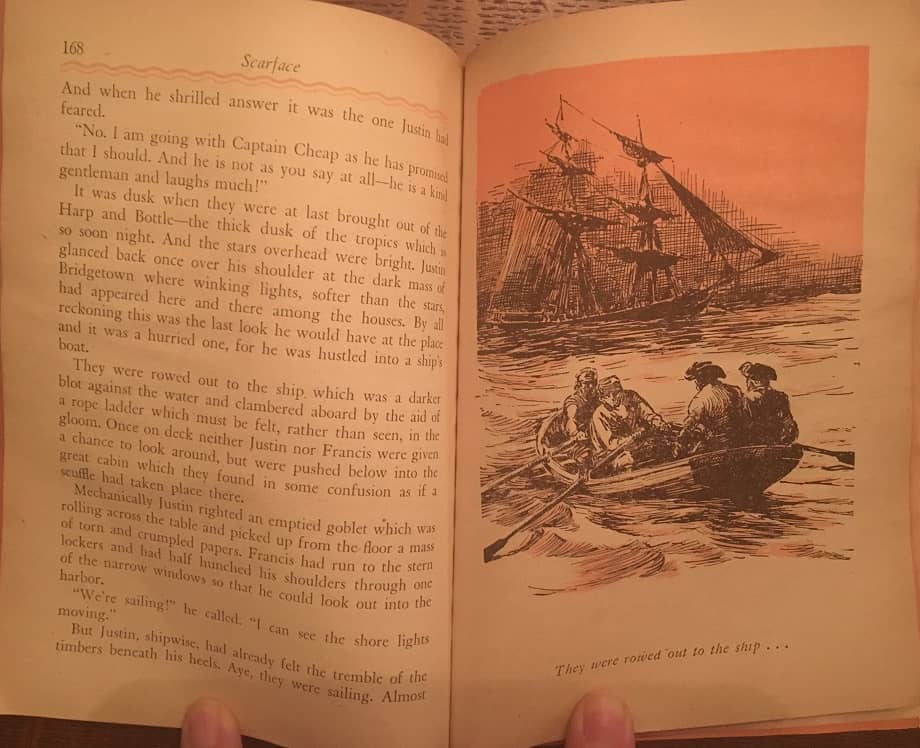 Scarface, as the cover announces, is the story of a boy pirate. Justin Blade. It was one of Norton’s popular juvenile historicals, which also included Rogue Reynard (1947) and Huon of the Horn (1951). Over at Goodreads it still holds up surprisingly well with a modern audience (4.11 out of 5). Here’s the back cover copy for the Comet edition.

The boy Scarface watched the lights of Tortuga dim as the Naughty Lass stood out for the open sea. The Spanish Main promised rich prizes for Captain Cheap and his pirate crew. And this time Cheap had set his sights high — for no less a prey than Sir Robert Scarlett, his lifelong enemy, and Her Majesty’s fleet at Bridgetown. His plan was daring. Muskets roared and swords flashed as redcoats and pirates fought savagely. The fate of Bridgetown hung in the balance — and with it the secret of Scarface’s true identity.

And here’s the dust jacket for the later Harcourt, Brace reprint edition. 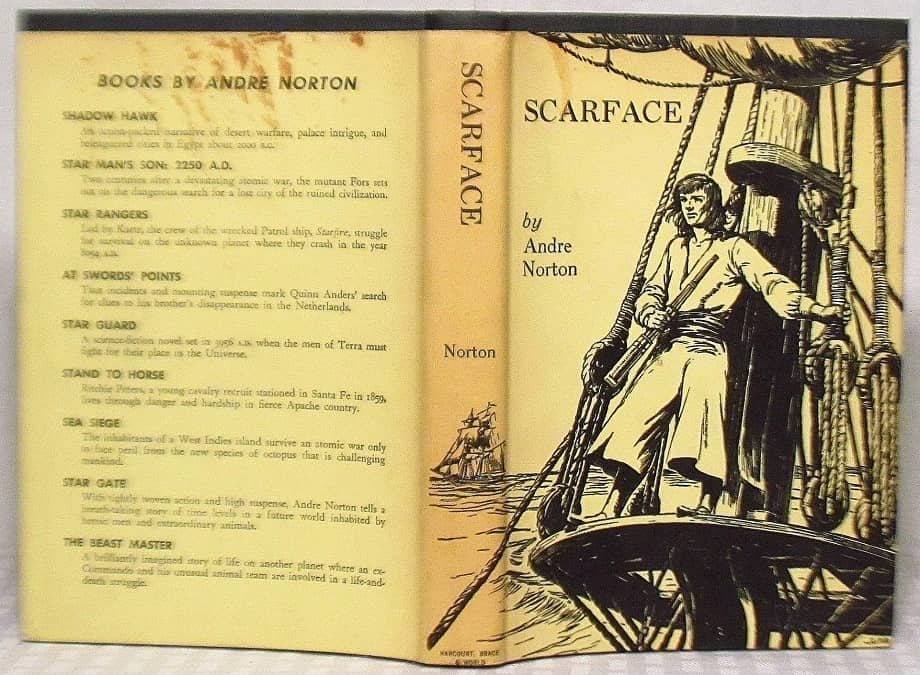 Andre Norton has consistently been one of our most popular subjects at Black Gate. Our recent coverage includes over 25 articles:

Scarface was published by Harcourt, Brace, in June 1948, and reprinted in paperback as Comet #28 in September 1949, with illustrations by Lorence Bjorklund. The Comet paperback is 239 pages, priced at 35 cents. I bought my copy at the Windy City Pulp and Paper show in 2018 for $3.

When Pacino said, “Say hello to my little friend!” I KNEW that I’d heard it somewhere…

I owned AT SWORD’S POINT. An enjoyable novel. It’s a pity that there isn’t more Norton readily available for the YA market.

HUON OF THE HORN was one of my favorites as a kid. I never saw her SCARFACE. (For that matter, I certainly didn’t see the Pacino film as a kid either!)

If I’m not mistaken, most of Norton’s SF novels were originally marketed as YA books.

Thomas — yes, in the ’50s anyway. I think that changed sometime in the ’60s. Often with the byline “Andrew North”.

But it was a little weird, because after the HC publication marketed as “Juvenile” (the then prevalent term), they would be published in paperback, usually by Ace, sometimes as an Ace Double, marketed to adults (essentially — of course teen age readers were definitely part of Ace’s market).

That is odd, because my beloved Heinlein juveniles were were pretty clearly presented AS juveniles in their Ace paperback editions, or so it seems to me. RAH was the biggest of big names, though, and I guess they figured the books would still sell no matter how they marketed them.

Donald Wollheim was responsible for marketing the Ace paperbacks of Norton’s books to adults, as well as changing the name of STAR MAN’S SON to DAYBREAK–2250 A.D. He explained it in the introduction to the paperback anthology THE BOOK OF ANDRE NORTON (originally published in hardcover as THE MANY WORLDS OF ANDRE NORTON in 1974):

“A couple of decades ago, during the founding days of the paperback publishing enterprise known as Ace Books, when I was its editor, I took a chance. I have always felt that if a book was enjoyable to me as science fiction then it would be enjoyable to the readers I sought to cater to. I published Andre Norton’s first science fiction novel, a book packaged by its hard-cover publishers as a juvenile, called STAR MAN’S SON. I published it in paperback with a new title, DAYBREAK—2250 A.D. I avoided all reference to it as a novel for younger readers. I presented it simply as a darned good novel for anybody who reads science fiction. It was so accepted and it has been selling steadily as such ever since.

“Subsequently this has been true for all her science fiction and her marvelous worlds of fantasy too, regardless of how the hard-cover publishers first offered them.”