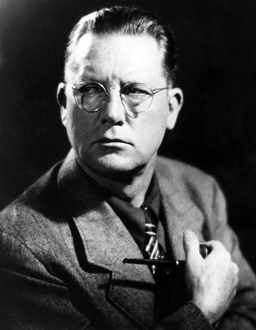 Erle Stanley Gardner is well-remembered as the creator of Perry Mason, star of over eighty novels, radio and tv. The famed defense attorney (portrayed by Raymond Burr) started out as something of a hardboiled PI in the first ten or so novels before settling into ‘lawyer mode.’

And Gardner also wrote thirty novels featuring Bertha Cool and Donald Lam (who you know ALL about from reading this post and this post here at Black Gate!). Gardner was the definition of a prolific pulpster, writing over one million words a year for over a decade: while working as a lawyer!

After many rejections, Gardner finally made the pages of Black Mask (under the name of Charles M. Green). in the December 15, 1923 issue of Black Mask with “The Shrieking Skeleton.” His seventh story to make the magazine was “Beyond the Law” and it featured Ed Jenkins, ‘The Phantom Crook.’

Jenkins appeared seventy-two times from 1925 to 1943 and made Gardner one of the Black Mask mainstays, alongside Dashiell Hammett, Carroll John Daly and Raoul Whitfield. He brought Jenkins back in the sixties for the short novel The Blonde in Lower Six in Argosy, which was owned by his old friend, Harry Steeger.

Jenkins almost didn’t make it to print. In early drafts, Jenkins committed a cold-blooded murder. Assistant editor Harry C. North wrote to Gardner that heroizing such a man wasn’t the sort of thing that he felt the magazine should be publishing. The author responded accordingly.

“Hell’s Kettle” was the second of a linked trilogy and appeared in the June, 1930 issue of Black Mask. “The Crime Crusher” was included in the May issue and “Big Shot” wrapped things up in July. The June issue also included the fourth and final installment of what became Dashiell Hammet’s novel, The Glass Key, as well as Carroll John Day’s “Tainted Power,” which featured Race Williams and The Flame.

Jenkins had been arrested for murder but escaped custody. He was wanted by the police, who did not know the district attorney, believing him innocent, had given him an undercover mission. Jenkins, a fugitive from justice, was to infiltrate the underworld and keep the separate factions from organizing. This duress from two different sides is a common theme in the stories. 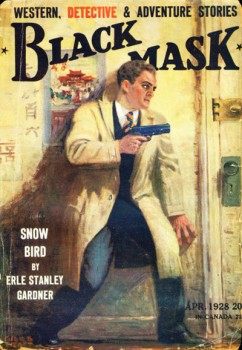 The September, 1927 Black Mask included an editorial comment from Joe Shaw on Jenkins:

For his earlier misdeeds, Ed is branded as a crook and the fetters of his former reputation still hang about him, making him suspected by the police and apparently, an easy mark for the underworld. As a consequence, he does not know an easy moment of repose. Continually he is forced into one tense situation after another, requiring the utmost of courage, cleverness and skill to extricate himself alive and free of the clutches of the police.

Jenkins rents a two-level house in which he becomes Doctor Chew, a Chinese herb doctor and fortune-teller, while upstairs he was Colonel Grayson, a toff of some kind. Jenkins plays both parts in the story and ends up a prisoner in the bad guys’ hideout. If you are only familiar with the Perry Mason stories, you’re going to learn that Gardner could write a slam-bang hardboiled action finale. It’s tough.

Coughing spurts of flame belched from the end of the weapon. I could feel the purr of the explosions. The door leapt into a mass of splinters, dissolved into kindling wood. Lena picked up a hand grenade, slipped the catch, rolled it through the door.

“The Cat Woman” was in the February, 1927 Black Mask, along with Hammett’s “The Big Knock-Over,” featuring the Continental Op. Belying Black Mask’s enduring image, the cover was for a western by Nels Leroy Jorgenson.

Upon learning that Jenkins was a crook, his brokers had taken his money, leaving him broke. He is approached by a shady messenger, requesting a meeting on a client’s behalf. Jenkins goes and a smooth, supple, feline-like woman with a purring voice, fronts him $10,000 to steal a diamond necklace and kidnap her niece from a party. But first she’ll switch out the necklace with a fake and claim the insurance. Jenkins suspects treachery and if he goes ahead with the job, he’ll be keeping an eye on his partner in one direction and the police in the other. Naturally, he proceeds!

It’s a convoluted caper and Jenkins is in peril from his first step. But The Phantom Crook is a tough guy to get the better of and there’s a finale with both sides ready to put him away. Our introduction to the title character could have come from a Bond movie (meaning it was copied FROM Gardner):

She was sitting back in an armchair beneath a rose-shaded reading lamp, her bare arm stretched out with the elbow resting on a dark table, the delicate, tapering fingers holding a long, ivory cigarette holder in which burned a half-consumed cigarette. Her slippered feet were placed on a stool and the light glinted from a well-proportioned stretch of silk stocking. It was an artistic job, and the effect was pleasing. I have an eye for such thing, and I stood there for a moment taking in the scene, appreciating it. And then I caught the gaze of her eyes.

Cat eyes she had; eyes that seemed to dilate and contract, green eyes that were almost luminous there in the half-light.

As you can imagine, Jenkins has his hands full with this one!

“Come and Get It” appeared in the April, 1927 issue of Black Mask, only three months after “The Cat Woman.” That issue also featured a Race Williams tale from Carroll John Daly, as well as stories from regulars Frederick Nebel and Raoul Whitfield.

It is part of a three-story cycle in which Jenkins is pitted against they ‘icy-eyed leader’ of a crime ring. The story opens with a bad guy with a gun having trapped Jenkins in his hiding place. Jenkins is most certainly a man of action, but he also has brains.

‘He blustered on and I yawned.

That yawn laid the foundation for a little scheme I had in mind. Crooks of the Dugan type really have an inferiority complex. That’s what makes ‘em bluster so much. They’re tryin’ to make the other man give in, tryin’ to sell themselves on the idea that they’re as good as the other bird.

“Rather tchilly this evening,” I remarked casually, after that yawn had a chance to soak in, and got up, calmly turned my back on the blustering crook and stirred up the fire with the poker. Apparently I didn’t know he was alive.

That got him. His voice lost the blah-blah tone, and rose almost to a scream.’

The mental warfare is followed by Jenkins tossing a chunk of firewood at his foe, then, using his fencing skills, he puts the toe of a fireplace poker through the guard of a gun and disarms Dugan. Jenkins 1 – Stupid Criminal 0.

Jenkins had performed a task for Icy Eyes, for which he was to receive some papers damaging to Helen Chadwick, a woman who The Phantom Crook is fond of. However, two papers were held back. Jenkins is ready to war with Icy Eyes and his considerable organization to get those papers.

Events continue on from the prior story, “This Way Out.” Jenkins beards the villain in his den and threatens to ruin all his operations. The rest of the story consists of Jenkins doing just that, trying to muck up a big jewelry heist.

The Jenkins stories I’ve read are fine, but they’re not among my favorites. Gardner was clearly fond of the character since he wrote over seventy tales and they don’t feel like rushed pulp jobs. I’ll read more Jenkins’ as I come across them, but I’m not in any great hurry to seek them out.

A (Black) Gat in the Hand: Day Keene (next week)

The setup of crook who’s really a good guy, or good guy who pretends to be crook, or character who’s hunted by both the cops and the bad guys is ubiquitous in the pulps. I just finished (and reviewed Friday) the six pulp-length novels featuring Mark Hazzard, District Attorney, who had a criminal background he had to keep secret.

I haven’t really read any of Frederick Davis’ stuff. I’ve got Andrew Salmon writing a post on The Moon Man for this series.

I agree with the end of your post – I always like an introduction because I know I’ll learn something.