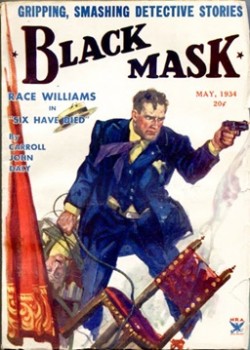 Last week, we looked at an article on writing from famed Black Mask editor, Joseph ‘Cap’ Shaw, which appeared in the May, 1934 issue of Writer’s Digest. What? You didn’t read that post? Well, click on over, do it, and then come back here and continue! Yeesh..

May, 1934 featured yet another solid issue of Black Mask under Shaw’s direction. The cover art was by J.W. Schlaiker, who had about fifty covers from 1929 to 1934. I don’t know why he abruptly stopped drawing for Black Mask. He served in France during World War I and was the War Department artist during World War II. He did portraits of Eisenhower, MacArthur and Patton.

Carroll John Daly carried the cover with Race Williams’ “Six Have Died,” which became part of the novel, Murder in the East. There were two more stories in this serial, which featured  The Flame. There would be one more story (“The Eyes Have It”) in November, and then Race Williams was no more in Black Mask. Williams would appear twenty-one times in Dime Detective but his successful career was in decline by May of 1934.

George Harmon Coxe’s Flashgun Casey was the subject our the very first post in this column. The hardboiled newspaper photographer was in the midst of appearing in seven consecutive issues; this story being “Two Man Job.” I like Casey, who was replaced by the more genteel Kent Murdoch.

From 1927 to 1934, Horace McCoy wrote thirteen stories about Captain Jerry Frost, leader of a group of Air Texas Rangers nicknamed ‘Hell’s Stepsons.’ They were basically a special ops team and Frost was a hardboiled problem solver. “Flight at Sunrise” was the second-to-last Frost story. I don’t believe that McCoy’s air tales have every been collected.

Of all the pulpsters, none may have had greater pretensions to greatness than McCoy. He’s best remembered for his novel, They Shoot Horses, Don’t They?, which became a successful film after his death. McCoy was a member of ‘The Fictioneers,’ which was an informal social club consisting of southern California pulpsters, including, at various times, Raymond Chandler, Norbert Davis, William Campbell Gault and W.T Ballard. 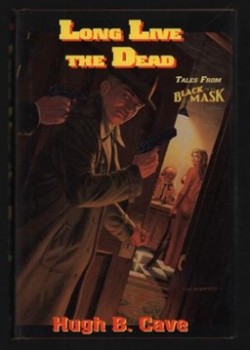 Hugh B. Cave went on to be one of the greats in the weird menace field, but he started out as a hardboiled mystery writer and had been selling stories for four years (he made his first sale at 19) when he broke into Black Mask with “Too Many Women.” Cave’s Boston PI, Peter Kane, is one of my favorites and a new collection of those stories just came out from Altus Press, with an introduction from yours truly. Long Live the Dead collects all of Cave’s Black Mask mysteries – it’s good reading.

Bill Lennox (subject of last week’s post) was a Hollywood studio troubleshooter created by Willis Todhunter Ballard. If that seems like an unusual middle name, he shared it with his first cousin, Rex Stout – creator of my favorite PI, Nero Wolfe. Lennox was a popular Black Mask character, appearing in over two dozen stories. Ballard also wrote five novels about Lennox; several of which can be found as affordable ebooks. The Lennox series is currently some of my favorite hardboiled reading. Ballard was a popular writer of westerns and wrote screenplays and also had some of his westerns adapted for the screen.

I don’t know much about William Rollins’ Jr., whose “I am Kidnapped” appeared in this issue. Rollins, who fought for the French in World War I, wrote hardboiled tales about boy heroes – which wasn’t really ‘done’ in the pulps of the day. It seems that his work is all but out of print today in pretty much any format.

That’s some quality pulp for twenty cents! The prior month’s issue had arguably an even better lineup and I’ll probably write about that one as well.

A (Black) Gat in the Hand: The Phantom Crook – Ed Jenkins (next week)

I’ve not read any of McCoy’s pulp crime fiction, but I can testify that They Shoot Horses, Don’t They? is an absolutely devastating novel. You can certainly see that its author was a graduate of the school of pulp – the prose is pared down to razor sharpness and the story hurtles on like a safe pushed down an elevator shaft. Nothing is wasted. It’s a one-sitting book.

Thomas – That novel has just never interested me. Nor have the other three or four he wrote. There’s too much other stuff that does appeal.

I’m going to do a post on his Frost stories.

If so, email me at upabob@Yahoo.com

I’ve THOROUGHLY enjoyed turning my reading back to hardboiled and pulp stuff. It had been several years since I dug into it (though in 2016 I re-read the entire Max Thursday series from Wade Miller: love those books).

I’m hoping to work in a post or two related to ‘pulp radio’ shows.

I’ve already written one here at Black Gate on Richard Diamond. And I’m working on a Box 13 essay for the Fall issue of Black Mask.

Maybe I’ll finally tackle Johnny Dollar. I love a lot of those episodes.

Or the Philip Marlowe show. I think it was much better than the light-hearted Sam Spade one.

Keep coming back on Mondays!