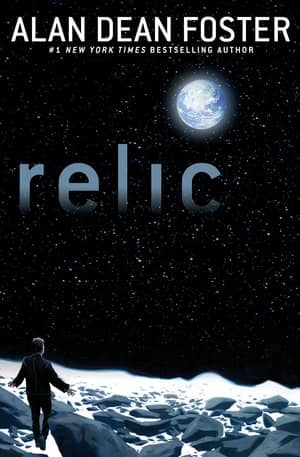 If it seems like it’s been a while since Alan Dean Foster released a standalone SF book from a mainstream publisher, that’s because it has. Over a decade now, since Pyr published his novel Sagramanda: A Novel of Near-Future India way back in 2006. And the one before that was Interlopers (Ace, 2001).

It’s not like he hasn’t been busy. Foster is in great demand as a media tie-in writer, and his recent books include top-selling titles like Star Wars: The Force Awakens (2015) and Alien: Covenant (2017). But his many fans who remember his fine early novels like Icerigger (1974), For Love of Mother-Not (1983) and the other Pip & Flinx books, and the tales of the Humanx Commonwealth Universe, are impatient to see something new from him.

It looks like we will finally be rewarded. Foster’s latest book Relic has been called “Stunning… A true first contact novel on many different levels” by Library Journal. It arrives in hardcover from Del Rey in two weeks.

The last known human searches the galaxy for companionship in a brilliant standalone novel from the legendary author of the Pip & Flinx series.

Once Homo sapiens reigned supreme, spreading from star system to star system in an empire that encountered no alien life and thus knew no enemy… save itself. As had happened many times before, the basest, most primal human instincts rose up, only this time armed with the advanced scientific knowledge to create a genetically engineered smart virus that quickly wiped out humanity to the last man.

That man is Ruslan, the sole known surviving human being in the universe. Rescued from the charnel house of his home planet by the Myssari — an intelligent alien race — Ruslan spends his days as something of a cross between a research subject and a zoo attraction. Though the Myssari are determined to resurrect the human race, using Ruslan’s genetic material, all he wants for himself and his species is oblivion. But then the Myssari make Ruslan an extraordinary offer: In exchange for his cooperation, they will do everything in their considerable power to find the lost home world of his species — an all-but-mythical place called Earth — and, perhaps, another living human.

Thus begins an epic journey of adventure, danger, heartbreak, and hope, as Ruslan sets out in search of a place that may no longer exist — drawn by the slimmest yet most enduring hope.

I primarily remember Foster in the 80s as the author of the Spellsinger series, and then his name seemed to be on just about every movie tie-in novel imaginable back then: Clash of the Titans, Alien, Krull, The Thing, and does anybody remember the Star Wars book Splinter in the Mind’s Eye?

I certainly remember Splinter of the Mind’s Eye! I wrote all about it here:

I read more than my share of Foster originals back in the day, when they were easy to find on the library’s paperback SF spinner. I still have a fondness for Midworld in particular.

He had a major presence on bookstore shelves all through the 70s and 80s. I never read MIDWORLD… is it a good place to start with the Humanx Commonwealth series?

I’d say Midworld works very well as a standalone — at the time I read it, I had no idea that it was set in a larger universe. A lost colony of humans living on a planet where all of the vegetation will happily kill you, and then newcomers arrive to establish a new colony.

I know he wrote a sequel — Mid-Flinx — that, as you’d guess from the title, brings Pip & Flinx to Midworld, but I don’t think I eve read it, nor any of the other Pip & Flinx novels.

And poking through his listings on Goodreads, the only other one I’m CERTAIN I read (aside from many, many novelizations) is Cachalot; but there were probably others.

That was a long, long time ago.

John, Midworld is my favorite Alan Dean Foster book. As been noted it works very well as a stand alone book. If you do read it you will not look at the movie Avatar in the same way.

John, I totally forgot about that post. I see that I even commented on it!

My favorite Commonwealth novel is Icerigger.

At Archon I presented Mr. Foster with a very huge, very dog-eared stack of paperbacks, and apologized for their poor condition as they followed me to three colleges and who knows how many other moves. He gave me a hearty handshake and said meeting a fan like me always made his trip worthwhile.

As I was also a con guest, my wife and I got to eat pizza with him. We mostly talked about Norway and whorehouses I recall. And Dr. John Dee. Who probably never visited a Norwegian whorehouse.