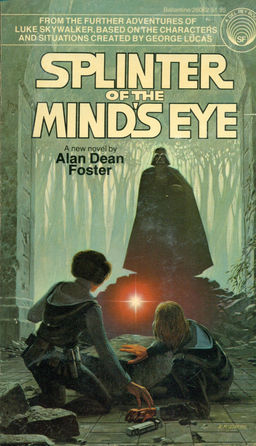 I was honored to be invited to participate in a Mind Meld article at SF Signal earlier this month. The topic was “Worthy Media Tie-ins,” so of course I took the chance to expand on my love of James Blish’s Star Trek books — particularly Star Trek 2, one of the very first books I ever owned, which I first mentioned a few weeks back in my review of The Best of James Blish.

What made James Blish’s Star Trek tie-in books so great? They were fun, fast-paced, and most of all, familiar. Before I plucked Star Trek 2 off the rack, the adult section of the bookstores was a strange and unfriendly place, filled with covers of stiff, formally attired men and much less stiff, partially-attired women. In short, Blish’s books were a gateway drug to a much wider world. With phasers.

But the book I was really dying to talk about was Alan Dean Foster’s Splinter of the Mind’s Eye, the very first Star Wars tie-in novel and the book that launched an entire publishing empire:

Splinter Of The Mind’s Eye isn’t just a media tie-in novel. It’s sort of an alternate-world, parallel-universe media tie in novel. A tie-in novel for a Star Wars universe in some time-stream that has nothing at all to do with our universe.

This is because Splinter Of The Mind’s Eye was written well before the release of The Empire Strikes Back. Before we knew that Vader was Luke’s father, before Han and Leia started making goo-goo eyes at each other, and before Leia traded in her princess gowns for a blaster with a full clip.

So Luke and Leia get a little more frisky in this book than you would reasonably expect from long-lost siblings, and Leia is a bit more of a helpless princess than you would anticipate after seeing Empire. Also, Darth Vader is a total dick, and has no compunctions at all about carving Luke up with his glowy red light sabre. Clearly, the paternity results had not arrived yet.

It’s not all about me, of course. There are some excellent discussions of other classic media tie-ins. John Mierau — who also has fond memories of Splinter of the Mind’s Eye — talks about Eric Nylund’s much-loved Halo novel The Fall of Reach; Aaron Rosenberg highlights Max Allan Collins’s Dark Angel trilogy, which tied up the dangling storylines after the TV series was canceled; James L. Sutter explores Richard A. Knaak’s classic DragonLance series The Legend of Huma; and Chadwick Ginther celebrates David Annandale’s entry in the Warhammer 40,000 universe, Death of Antagonis — among many others.

Enjoy the entire article here. Thanks to Andrea Johnson at SF Signal for the invite — I had a blast doing this one.

Funny. “Splinter of the Mind’s Eye” might have been the first “adult” book I ever bought myself. I remember running across it on a revolving rack in a small grocery store in … ’79 maybe? Don’t remember exactly, but it was before “Empire” came out. Like others, I have fond memories of the book.

And it seems to me the late ’70s and early ’80s must have been Alan Dean Foster’s heyday. I mean, every time I turned around during that period, Foster had a new novel out, often a new media-tie-in novel. If my memory serves me, he wrote the tie-in novels for “Alien,” “John Carpenter’s The Thing,” “Outland,” as well as “Clash of the Titans.” And that’s not including his own works of the time.

Ty — Don’t forget The Black Hole and Star Trek: The Motion Picture. And my understanding is that he ghost-wrote the adaptation of the original Star Wars.

His first tie-in was for John Carpenter’s Dark Star. I remember loving that as much as the movie.

Foster’s Icerigger (a non-tie-in) is well worth tracking down. It’s what got him all that Star Wars work to begin with.

I own a copy of Foster’s novel adaptation of Alien. I think I remember an interview where he claimed he had to write the book with no, or little, knowledge of what the alien was going to look like in the movie. Hmmm. Haven’t read it, but I’m not sure whether it would be that great a story without those details.

Also, I think I remember Foster doing a novel adaptation of Disney’s The Black Hole. Does anyone else remember that?

Yup — Alan Dean Foster didn’t get much sleep in the 70s and 80s. He ghost-wrote the original STAR WARS novelization, as well as ALIEN and many others.

I forgot all about THE BLACK HOLE book, to be honest. And I don’t think I ever knew there WAS a book version of KRULL or DARK STAR. How on earth did he describe the surfing scene at end of DARK STAR?? It’s a big visual reveal.

But Eric is right about Icerigger — very popular book at the time, and it led to a complete trilogy.

I don’t remember. I’m going to have to see if my copy’s still in a box somewhere.

I remember reading a bunch of his non-tie-in books back during Peak Foster and enjoying them; my favorite probably remains Midworld.

And I also vividly remember being on vacation with my family, visiting relatives in Tucson, AZ, walking into some random drugstore and, in one of those wire racks, seeing A! NEW! STAR! WARS! BOOK! Talk about your life-changing moments …

Absolutely right. I had the same experience.

I forget these days what it was like to be ignorant of major release until they arrived in bookstores. It sure made spinning the paperback rack at the supermarket an exciting experience every week. That how I discovered the sequels to DUNE, now that I think about it. And countless other books.

That was a fun article. Like most geeks my early forays into reading “adult” books were tie-ins. Does Jurassic Park count? I read it after seeing the movie.

One of the best tie-in series I’ve read is S.D. Perry’s books set in the Resident Evil world. Especially the ones taking place in between the video games, where she could write her own story.

Like many of you, Splinter was one of my gateway drugs into written sf.

I do want to point out that everyone seems to be overlooking one major novelization Foster did in the 70s, and that was the animated Star Trek series, novelized as the Star Trek Logs. I believe there were 10 on them.

Westkeith — Yes! I was sadly deprived as a child — Star Trek was not syndicated in my hometown, so my only exposure was getting the Blish and Foster episode novelizations from the library. The Foster one I remember particularly was Bem, where the actual episode was only about the first quarter of the story Foster told. That particular volume only included the single episode.

[…] wanted to add a couple additional comments to John’s brief post about tie-ins. Much of the commentary revolved around Alan Dean Foster. He’s a favorite of mine and […]