(This week, I’m at World Fantasy Convention in Brighton, England. If you see me, please say hello – it’s my first convention in years!)

I feel so at home in this place, it takes a while to realize that it reminds me of my study.

Weapons and armor roost on the walls, occult tomes jostle with classics and history books for shelf space, and History’s shrapnel — locks of hair, an ancient book, or a scrap of stone or pottery — remind us of a real and concrete past.

Yes, it’s like my study, except it’s an entire house…

Abbotsford House on the Tweed near Melrose, is the absolute archetype of a Fantasy writer’s perfect mansion, except that it was built by the grandfather of historical novelists, Sir Walter Scott, way back in the 19th century.

Sir Walter Scott is Scotland’s Robert E Howard. His Targe and Tartan yarns put Scotland on the 19th-century tourist map. If his text is past its sell-by date, his stories live on on the screen, big and small.

He was so famous in his day that both Blucher and Wellington were glad to meet up when he visited the field of Waterloo. When he fell ill, the government lent him a Royal Navy frigate so he could tour the Mediterranean. (Oh, and, Hail to the Chief? Guess who wrote the original verses?)

But it’s not Sir Walter’s fame that draws me back to his home time and again. Nor is it his books, which I confess I have not read.

It’s the place he created. 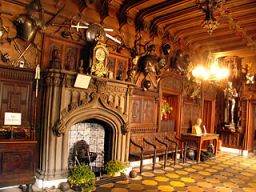 Abbotsford House is an eye in the storm of History. A sort of static TARDIS decked with the trophies of a time-travelling imagination.

Outside, overlooking the River Tweed, a fragment of stone embedded in the garden wall boasts that a Vexilla of the 20th Legion did… who can say? Nearby, naked Classical heroes brandish spears in the company of weather-worn medallions of Renaissance potentates.

In the Hall, bullet-riddled cuirasses reverberate to the din of Waterloo, and a pair of 16th-century armors, Pompeii-like, preserve the imprints of German knights who might have toasted the Reformation or helped to toast the heretics who sought to shrug off the yoke of Rome.

On another wall, bucket boots and black armor seem to reek of the 30 Years War — burning flesh and the egg-stench of gunpowder. A few paces away, exotic Persian maces and Indian gauntlet swords jostle for space around an original portrait of James IV.

King James seems too refined to have fallen with steel harness on his back and a sword in his hand, until you notice the bullish neck. The king who fell at Flodden shares the company of a horned Celtic chamfron that once lent a terrible aspect to a tiny pony as it trundled a war chariot along behind it while painted savages chanted prayers to Morrigan and God knows what gods.

And then there are the books.

Just the titles — because that’s all the visitor ever gets to read — are enough to transport you to otherwhen. Histories of sorcery, of war, of architecture, of Romans and Greeks, knights and warriors. Classical texts and classic texts. Gazetteers and guidebooks. Grimoires.

To wander Abbotsford House is to confront the reality of the totality of History. Any of the doors could open out onto a world of Romans or warriors or knights or knaves.

All you need is the imagination to turn the key.

M Harold Page (www.mharoldpage.com) is a Scottish-based writer and swordsman. His debut novel The Sword is Mightier came out recently. His Foreworld SideQuest, Marshal versus The Assassins is available on Amazon for preorder.

I’m at the convention too. Hopefully I’ll see you around.

And by the magick of the Internet, we met up, hung out. This is a civilised age.