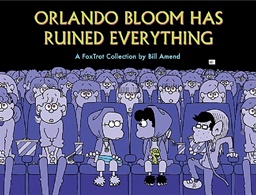 Bill Amend’s Fox Trot is a comic strip that ran daily from 1988 into 2006, then switched to a Sunday-only format. Still around today, it tells the story of the Fox family. Dad Roger is a loveable goober who wishes he was better at golf and chess. Mom Andy is the common sense core of the family unit. Sixteen year old Peter is a wannabe athlete, with fourteen year old Paige a typical teenage girl. And ten year old Jason lives to torment Paige and is a school geek. He’s got a pet iguana named Quincy who acts like, well, an iguana, but can really be the center of a strip.

The dynamics and shifting alliances of the three kids are instantly relatable to anyone who grew up with at least one sibling. as Calvin and Hobbes’ creator Bill Watterson wrote in the introduction to the first collection:

Fox Trot particularly captures the Machiavellian nature of adolescents. The balance of power between Peter, 16, Page, 14 and Jason 10, is a constantly bartered commodity, and alliances are fragile and short-lived. No collusion will survive an opportunity to get a sibling in trouble, and hesitant parents are goaded with the cry of, ‘Punish him! Punish him! Ground him! Ground him!’

Meanwhile, the challenges of parenting and marriage are amply represented by Roger and Andy. It’s one of my all-time favorite strips and with my nine year old son going through all my collections, I’m enjoying the Fox family all over again.

Jason is a Black Gate kid. His interests are all over pop culture: Star Wars, Star Trek, Lord of the Rings, horror (he loves Halloween, to his family’s pain), Christmas lists, Indiana Jones (even Young Indiana Jones) and cultural tropes such as westerns and Sherlock Holmes. Naturally, being a brainy geek, he’s into Dungeons and Dragons, usually playing with his best friend, Marcus. One rainy spring break, Paige found herself lured into playing D&D with Jason.

Paige hates school. Which of course Jason loves, one of many juxtapositions between the two. While she would gladly sleep all day on a typical Monday through Friday (and Saturday and Sunday for that matter), she is full of joy at getting up for Spring Break. Except this year, it’s pouring down rain, limiting the fun she’ll have with her best friend Nicole.

Jason sees an opportunity to get her sister to play D&D with him – if you’ve read the strip, you can guess what kind of Dungeon Master he’s going to be! Notice the raised eyebrows as he asks her to play.

Jason, with a bunch of binders, the sign of a dedicated Dungeon Master, makes his pitch to his sister, who can’t believe this is how her Break is shaping up. ‘Castle of the Cloud Giants’ is likely a nod to the classic AD&D series, Assault of the Giants. Paige’s final comment is indicative of her feelings on the prospect of playing D&D with Jason. The triple raised eyebrows and lip puckering as he entices her with the Rune of +4 Spell Casting is marvelous. He’s a full-blown D&D geek, just like I am…I mean, was.

Newcomers to playing RPGs are often put off by the massive amounts of rules to learn. A good Dungeon Master (DM) eases the newbie into things and doesn’t bury them with every bit of the rulebook.

I’ve written about options and rules bloat; the RPG System Killers. To sell more books and keep the game from becoming stagnant, more and more rules and options are introduced until the system collapses under its own weight. This strip pokes fun at rules bloat.

Jason is typical of the D&D player who has a massive collection of rules, adventures and supplements, kindly allowing Paige to not bother with volumes 18 through 31 of the rules.

And Paige is ready for character creation. To be fair to her, she seems to be having a good time. Now, we run into a conflict between the two. She wants to name her female character Lisa Marie. Jason’s head nearly explodes. After explaining the underlying spirit of character naming, she adds ‘The Fashion Plate’ to her heroine’s title. “You realize you’re destroying the game I love” is his response. She’s having fun and fully participating: but in her own fashion. Which is NOT Jason’s approach. Reminds me of a Dexter’s Laboratory episode when Deedee gets to DM Dexter and his friends.

Back when I created my first several characters with Chris Prichard as the DM, my Paladin was named Hector (after the hero of Troy) and I came up with names like Arborlon the Druid, Surfal the Illusionist, etc.. Our friend Steve Tompos, not really into D&D, used Gemini, Atari, Coleco. You get the picture.

Jason is wearing his Dungeon Master crown. Love it! Finally, after six hours of character creation, Paige has a three-person party and is ready to play. She makes one decision — the party enters the cave. And Jason immediately kills the party, rolls some dice and says their bodies won’t be found for eighty-two centuries.

We’ve all had a DM like this at some point. They enjoy being mean. And it’s frustrating and no fun for the players(s).

Paige explodes. She’s wasted hours creating a party, which Jason immediately kills. She hated it and will certainly never play D&D again. She hated the experience. But Jason, who lives to make his sister miserable, loved it! This is a good example of how he annoys her at every occasion.

Now that I’ve got my scanner working, a few more ‘Comic Strip Posts’ will be coming, including the hardboiled PI Tracer Bullet from Calvin  & Hobbes — I’ve wanted to tackle him for a couple years now.

Jason & Marcus were the reason I read Foxtrot.

Just an awesome strip for so long.