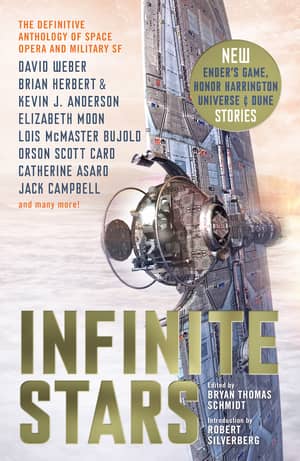 Bryan Thomas Schmidt is probably best known as the guy who loudly stormed out of the 2015 Hugo Awards when he lost in the Best Editor, Short Form category (he lost to No Award, since all the nominees were dictated by Vox Day as part of his Rabid Puppy slate). Black Gate was part of the same slate, but we withdrew our nomination (and Bryan unfriended me immediately thereafter).

That’s an unfortunate thing to be known for, especially since Bryan has done some really excellent work before and since. His other anthologies include Shattered Shields, Little Green Men―Attack!, Mission: Tomorrow, Galactic Games, and many others. His latest book, the massive Infinite Stars, is the most ambitious project of his career to date: a 674-page anthology of space opera tales featuring some of the biggest names in the industry. Here’s Rich Horton’s take, from the October issue of Locus.

Bryan Thomas Schmidt’s new anthology Infinite Stars is a big collection of space opera stories, split roughly evenly between reprints and originals. The reprints serve to some extent as an introduction to the subgenre, with examples from such classic series as Cordwainer Smith’s Instrumentality of Mankind, Anne McCaffrey’s Ship Who Sang books, Lois McMaster Bujold’s Vorkosigan series, A.C. Crispin’s Starbridge, and Larry Niven and Jerry Pournelle’s Codominium… These serve their purpose very well — they are a set of significant stories and showcase space opera from the ’50s to the present day nicely…

Most of the other stories in this book are also parts of series… these series include some really major SF landmarks: Orson Scott Card’s Ender universe, Brian Herbert and Kevin J. Anderson continuing Frank Herbert’s Dune series, David Weber’s Honorverse. There are stories from some more recent series that I’ve really enjoyed — Elizabeth Moon’s Vatta’s War, for example (which she has just returned to), and David Drake’s Leary/Mundy (or RCN) series. It was nice also to be introduced to some work new to me, such as Linda Nagata’s Red stories, Jack Campbell’s Lost Fleet, and Charles R. Gannon’s Caine Riardon stories…

All in all, Infinite Stars is a strong celebration of the variety and power of the space opera subgenre, both in its history and its ongoing vitality.

As Rich points out, there’s a great deal to enjoy in this book for any fan of space opera, old and new.

For the record–this is, as you’ve indicted, a terrific antho. So no argument there. But–I was at the Sasquan Hugos and Bryan didn’t “storm out” Some guy who was sitting next to me did, loudly! (I think his category was Related Work.) Maybe that got conflated with Bryan’s actions? He did leave, but it didn’t appear to me to be in a major huff. And it wasn’t until after the next category.

Thanks for helping to set the record straight. I didn’t attend the Hugos, and was commenting more on the way Bryan’s reputation has suffered since the ceremony, so I’m glad to hear from someone who was an actual witness.

Last time Bryan contacted me I offered him an opportunity to explain what he did, and he said:

“It was because NO AWARD block voting was clearly going to be the result and people were rudely cheering and applauding the disappointed nominees.”

That seems to me to be a more likely explanation for events.