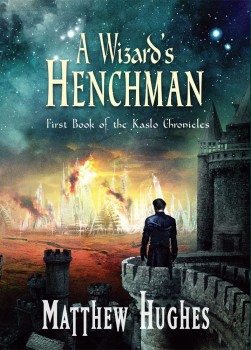 I hate Matthew Hughes’ book, A Wizard’s Henchman (2016). Not for the wonderfully complicated cosmogony of its universe; not for the ease with which it slips between dark humor and nightmarish horror; not for its uber-compentent, sympathetic hero, Kaslo. No, I hate it because, although it’s the first volume in a new series, it turns out it’s also a culmination of sorts for Hughes’ long-running Archonate series, and I didn’t know that going in. I had no idea until well into AWH that it serves as a major hinge point in his fictional universe, where one type of reality is supplanted by an entirely different one. Now, if I limit myself to the expoits of master discriminator Henghis Hapthorn, I have three novels and a collection of short stories to read. If I don’t limit myself, there’s another ten books to add to the list.

Obviously, I don’t hate A Wizard’s Henchman. In fact, I love it — for all the reasons I mention above and more. Many comparisons have been made between Hughes and Jack Vance, even by Hughes himself (where he describes the Archonate’s explicitly Vance-inspired origins). On the surface, it’s easy to see similarities in the two authors’ works: a love of rarely-used words; sly humor; non-stop inventiveness harnessed to creating oddball societies ruled by idiosyncratic rules and rulers; etc. Hughes, though, is no mere mimic. Like Michael Shea and Neal Barrett Jr., Hughes clearly carries a torch for Vance, but it does not outshine his own talent, originality, and powerful instincts as a creator of captivating stories and great originality.

Up until now, most of the Archonate stories have occurred in Earth’s stellar arm among thousands of settled worlds, collectively called the Spray. Apparently, (SOMETHING I WOULD HAVE KNOWN IF I’D READ ANY OF THE OTHER BOOKS FIRST) one of the central conceits in the series is that magic is staging a universal comeback, at which point it will completely replace cause-and-effect empiricism. Hughes created the sci-fi version of the Archonate as the last age before that of Jack Vance’s Dying Earth stories. (As a side note, let me say that if you haven’t read them you should be ashamed. Buy them now and read them tonight). In Vance’s books, old Sol is a fading crimson orb illuminating an Earth that’s a long way down the path toward extinction, and where more magic has been forgotten than is even remembered anymore. A Wizard’s Henchman is about the days following the transition of the Universe to a place where sympathetic magic rules everything and the laws of physics have lost much of their sway.

Like a James Bond movie, AWH opens with a mini-adventure. Erm Kaslo, a licensed confidential operative, has arrived on the world of Cheddle to enforce an arrest warrant for Binnie Varshun for defrauding Diomedo Obron. As soon as he meets the local police chief, Kaslo is knocked out, then wakes up in a prison camp. In the aftermath of his escape, Kaslo starts to learn that certain people, his employer, Obron, among them, believe the Universe was once run by magic and is about to be again.

Despite not believing such obviously insane nonsense, Kaslo agrees to hire on again with Obron, who is again working with Varshun, this time with a clearer arrangement to prevent fraud. Various encounters of a very strange and virulent nature culminate in several deaths, and Kaslo decides to avoid any further involvement with what seems to be happening. But it soon becomes clear the universal change he was warned of is really taking place, and Kaslo realizes that to be safe he must locate someone who knows how to use magic. The only person he knows is his ex-employer, and once again he finds himself in Obron’s service.

From earlier incidents, it seems clear to Kaslo that another wizard, Phalloon the Illimitable, is preparing to take out Obron. It is in the nature of thaumaturges to overpower and control or destroy their competitors.

“We are all ruthless,” Obron told him, “but some of us are simply cruel. And a few are complexly cruel, which is worse.”

Relying on his long experience as a confidential operative, Kaslo persuades his employer that no war is won by only defending. Eventually, working in tandem, Kaslo and Obron outsmart Phalloon and take possession of his redoubt. Besieged by the other wizard and a subservient elemental, Kaslo, brilliantly cleverly playing to the wizard’s greed, manages to lead him to his own destruction.

With their enemy defeated, Obron throws himself completely into the study of magic, and Kaslo into rebuilding some sort of civilization, for what once was is now gone.

Finally, he went up to the flat roof of one of the larger towers and leaned against the parapet, as the planet’s sun sank below a horizon no longer broken by the Commune’s skyline. In the opposite direction, the stars were coming out, but Kaslo could seen only a handful of the glittering orbitals that used to stretch in a sparkling, glinting arc across the night sky. Some had been thrown off into space, some had come down in searing fireballs, some had just gone dark and died.

When survivors arrive he offers them the wizard’s protection in exchange for their construction of a palisade and farms. For a while things go swimmingly, until suddenly they don’t. Terrible insectile creatures storm the new village while Obron is distracted and capture most of the populace. It gradually becomes clear that behind Phalloon some greater power was operating.

From this point on, AWH becomes a book of constantly escalating action and mystery. Like Doc Smith’s Lensman series, there seems to be one villain after another. To try to uncover just who or what is menacing them, Kaslo descends into the land of the dead. Later, he is forced to travel through a whimsy — a sort of wormhole previously used for interstellar space travel — to another plane of existence. Eventually, Kaslo and Obron travel to Old Earth in search of their enemy. Things get stranger and more dangerous from there. By the time the end is reached, readers will have had their heads snapped this way and that by an endless series of insane events.

Hughes writes beautifully, with clarity and a most enjoyably dry sense of humor. It pops up constantly throughout the book, leavening what, at times, is actually quite unpleasant stuff — in particular the fate of the kidnapped townspeople. One of my favorite bits is something Obron recounts to Kaslo during their battle with Phalloon:

With an air of determination, Phalloon marched to the trunk and stood looking down into it. Then he cast toward the stone pile a glance so baleful that the op felt something inside him turn cold.

“Out of the way,” said Obron, pushing him aside. “He’s employing Pothry’s Basilisk. He used to do it to mice and roaches then offer us the results as parting gifts. As if anyone would be impressed by stone vermin.”

There are tons of bits and pieces that made me almost giddy with their coolness. One of the in-universe’s technologies is portable artificial intelligences called integrators. We learn that, while most of them simply cease to function during magic’s ascendancy, a few of them are so old that they have experienced the transition between a science-run and magic-run universe and have learned how to adapt. When Obron is in need of transport to Earth, he calls up his old space yacht and it transforms itself into a sentient dragon. The creature is neither surprised nor put out by its sudden change of nature, explaining that its fundamental purpose hadn’t really changed.

I’ve been reading Hughes’ short stories about the thief Raffalon for some time now, and have enjoyed the heck out of all of them. I also read and reviewed his Pathfinder novel, Song of the Serpent, and pretty much liked that. A Wizard’s Henchman is the first original novel of his I’ve read, and it’s an absolute gem. Not too long, never given to long, dull sequences, it moves with grace and suppleness, as Kaslo is confronted with a reality that he first can’t admit to, and second undermines his own skills and talents. Along the way, he grows in confidence and knowledge and by the end he’s obviously a man on his way up in this new cosmos. I definitely recommend this to anyone and everyone and will be revisiting the Archonate before too long.

I let my F&SF subscription end when one my favorite regulars died and another — Hughes — seemed to be winding down story line. Ha!

Cool review. I’ve been meaning to read Hughes. So many books…