The City of Brass! One of the most storied locations in fantasy! Or it would be, except that no one dares write about it. Ever since it was featured on the cover of Gary Gygax’s Dungeon Masters Guide in 1979 (above left), the opulent city of efreet floating on the Elemental Plane of Fire has loomed large in the imaginations of Dungeons and Dragons players around the world. But beyond a single tale from the Arabian Nights, there’s been precious little to feed those eager minds.

So I was intrigued to read the details of The City of Brass, the upcoming debut fantasy from S. A. Chakraborty, which has been described as a blend of The Golem and the Jinni, The Grace of Kings, and Uprooted. It’s a tale of a magical Middle Eastern kingdom, and a clever and young con artist with strange gifts. It arrives in hardcover from HarperVoyager next week.

Nahri has never believed in magic. Certainly, she has power; on the streets of eighteenth-century Cairo, she’s a con woman of unsurpassed talent. But she knows better than anyone that the trades she uses to get by — palm readings, zars, and a mysterious gift for healing — are all tricks, both the means to the delightful end of swindling Ottoman nobles and a reliable way to survive.

But when Nahri accidentally summons Dara, an equally sly, darkly mysterious djinn warrior, to her side during one of her cons, she’s forced to reconsider her beliefs. For Dara tells Nahri an extraordinary tale: across hot, windswept sands teeming with creatures of fire and rivers where the mythical marid sleep, past ruins of once-magnificent human metropolises and mountains where the circling birds of prey are more than what they seem, lies Daevabad, the legendary city of brass — a city to which Nahri is irrevocably bound.

In Daevabad, within gilded brass walls laced with enchantments and behind the six gates of the six djinn tribes, old resentments run deep. And when Nahri decides to enter this world, her arrival threatens to ignite a war that has been simmering for centuries.

Spurning Dara’s warning of the treachery surrounding her, she embarks on a hesitant friendship with Alizayd, an idealistic prince who dreams of revolutionizing his father’s corrupt regime. All too soon, Nahri learns that true power is fierce and brutal. That magic cannot shield her from the dangerous web of court politics. That even the cleverest of schemes can have deadly consequences.

After all, there is a reason they say to be careful what you wish for…

The advance praise for the novel has been fairly strong, and much of it calls out the author’s deep knowledge of Middle Eastern history and folklore. Library Journal said its “swiftly moving plot, richly drawn characters, and beautifully constructed world… will entrance fantasy aficionados.”

Still, beyond drawing inspiration from the same literary source, there’s likely very little that connects Chakraborty’s City of Brass with Gygax’s fanciful creation. Readers looking for something that hews a little closer to Gygax’s vision may also want to explore some of the gaming supplements that have popped up over the years. Rob Kuntz, who was co-Dungeon Master with Gary Gygax for the first Greyhawk campaign, designed the adventure “Into The City of Brass” for tournament play at Dragoncon I in 1987. The map certainly looks sufficiently old school, anyway. 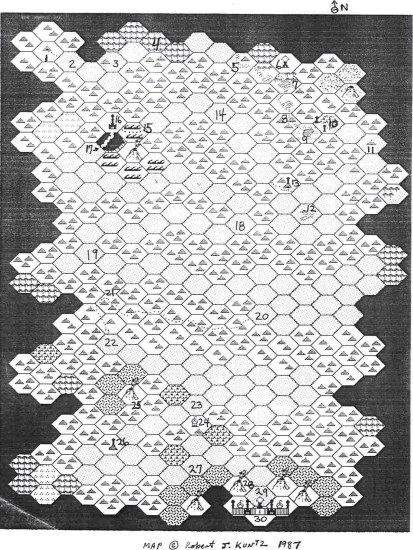 The complete adventure is online at The Acaeum here, with the following note:

This module was created by Robert Kuntz (one of the original founders of D&D), and was to be published by his company, Creations Unlimited (who previously published Garden of the Plantmaster and the four modules in the Zayene series). The company unfortunately went out of business, and the planned series of RPGA modules based on the City of Brass never saw the light of day. Kuntz released this first module to the Internet some years ago, where it has been floating ever since. It is freely distributable, provided it is kept intact and in its entirety.

Robert Kuntz has recently formed Pied Piper Publishing, and is planning to release the full version of City of Brass in the near future, through KENZER and Company publishers (under their award-winning Hackmaster line of products).

Sadly, Kuntz never delivered the final manuscript to KenzerCo, and the company hired Jeff Knight to complete the project; it was released as the 128-page adventure Sir Robilar’s City of Brass for HackMaster 4th edition on October 15, 2003 (below left). Kuntz tried again with Necromancer games, but severed his relationship with them before the final product shipped. Necromancer released the massive boxed set City of Brass, by Casey Christofferson, Scott Greene, and Clark Peterson, on August 16, 2007 (below right). Click the images below for bigger versions.

Both products are out of print and hard to find these days, and it’s not likely we’ll ever see Kuntz’s original vision in a definitive edition. So perhaps it’s best if we content ourselves with literary journeys to the legendary City of Brass.

Ah, sweet, sweet oldschool rpg art. Yes, much of it is amateurish, but that only adds to the considerable charms. I can’t say for sure if it’s not purely the nostalgia speaking, but art such as the DM’s guide here just screams wonder and adventure to me in a way much of the modern RPG art does not. 5th edition has some nice art and goes some ways to improving the situation, but there isn’t anything that fires the imagination and triggers a feeling of the weird and fantastical sublime quite like that DM’s guide.

I think I got a PDF of Necromancer’s version on sale a couple years ago for $10. There’s a lot of stuff in that one.

Thanks for the informative article John. I found the link to Rob Kuntz’ wiki insightful. The trials and tribulations of the gaming industry!

Greyhawk wise – while I have no first-hand experience so am going with what I have read and understood over the years – The The City of Brass wouldn’t be the first “Greyhawk” book that had only a tenuous tie into the world. I am minded of the Mika trilogy of books by Rose Estes (which I recall enjoying quite a bit) whose tie in was quite superficial.

Speaking of Necromancer Games and City of Brass, an efreet might have mentioned that there will be a new version of City of Brass for 5e on the horizon, courtesy of Frog God Games.

Right you are! Although it appears to only be available in PDF format at the moment.

Anybody out there tried it?

The one listed on our website is the D20 version. In 2018 there will be a new revision with a lot of added content for Fifth Edition.

Great news! Thanks for the update.