I’m always looking for more books to review. If you have any, send them my way. 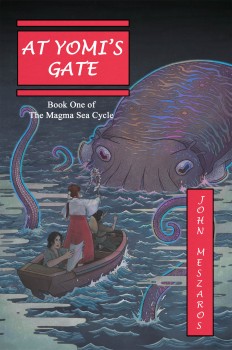 John Meszaros’s novel, At Yomi’s Gate, is a story about medieval Japan, in which every legend, myth, and religious belief are not only true, but play an active role in the story. Central to the story is the fire god Kagu-tsuchi. Lord Kotoheisei has trapped him in the Batsu-no-Kaji, from which he releases him only to wreak havoc on his enemies. Kagu-tsuchi is a mindless engine of destruction, destroying everything in his vicinity unless he can be controlled. This is not his story. Instead, it is the story of the Batsu-no-Kaji, a young woman named Sakura.

On Lord Kotoheisei’s first attempt to use his weapon, he loses control of Kagu-tsuchi. Ikuko, the priestess whose job it is to keep the fire god contained, escapes with Sakura, and Lord Kotoheisei is furious. He sends his nephew Fumito out to find his Batsu-no-Kaji and bring her back, on threat of murdering his family one-by-one. Fumito is no warrior, but an artist who uses illustrated scrolls to tell stories. Both he and Lord Kotoheisei know that the ink he uses is enchanted with the fire god’s magic, and will no doubt draw the Batsu-no-Kaji to him.

Fumito has no illusions about the kind of man his uncle is, and when he finds Sakura and Ikuko, he decides that he is willing to sacrifice his family to save thousands from Kagu-tsuchi’s fire. However, in their attempt to free Sakura of Kagu-tsuchi, they instead transfer Kagu-tsuchi’s magic into her. Bursting with her newfound power, Sakura decides she will rescue Fumito’s family and get her revenge on Lord Kotoheisei. The attack does not go as planned, however, and Fumito barely escapes Kotoheisei’s palace with his one surviving relative, his sister Yoko. Before the story is through, Ikuko, Sakura, Yoko, and Fumito will face ghosts and demons, gods and oni, and travel to the underworld of Yomi itself in order to defeat the forces trying to control Sakura’s fire.

To this layman, John Meszaros’s story seem well-researched and vibrant, making medieval Japan feel alive and inhabited not just by humans but by the demons, spirits, and gods they believed in. He does a good job of incorporating his research without “notebook dumping”—the showing off of research without incorporating it into the story. If anything, he sometimes doesn’t explain enough, and could perhaps offer some more explanation of Japanese terms and concepts.

Not explaining enough happens in other ways, too. One issue with the novel is that it at times skips over necessary scenes, leaving us to guess at what happened. We never do see Fumito explaining the situation with his family to Sakura and Ikuko, nor how Sakura and Fumito reconcile their shared love of Ikuko. We see the beginning of the destruction of Lord Kotoheisei’s family, which set him on the dark path where we encounter him, but not its resolution or how he and his sister allied with the siko-me Shiro, a half-centipede/half-woman guide for the dead. It feels less like the author is deliberately avoiding telling too much or that he plans to fill in the rest in a prequel, than that the scenes are just missing.

Despite this, the characters At Yomi’s Gate are interesting and varied. The giant priestess, Ikuko, is both bashful and bold. Fumito is well-meaning but constantly gets in over his head. And Yoko has to learn to forgive her brother for sacrificing her family in order to save the country, while also taking care of him and her new husband, the outcast physician Takashi. Even Lord Kotoheisei’s ambition, paranoia, and cruelty are somewhat understandable given what happened to his family when he was young.

But ultimately, At Yomi’s Gate is the story of Sakura, of a woman forced to carry the power of a god. Her desire for revenge is understandable after all she’s been made to suffer, as is the consternation of the others when her revenge goes too far. Her redemptive arc as she attempts to make amends is the heart of the book, and critically we find ourselves ready to forgive great crimes in our understanding and sympathy for her.

Donald S. Crankshaw’s work first appeared in Black Gate in October 2012, in the short novel “A Phoenix in Darkness,” and he and his wife have recently published the anthology Mysterion: Rediscovering the Mysteries of the Christian Faith, and are now starting a Mysterion webzine. Donald lives online at www.donaldscrankshaw.com.