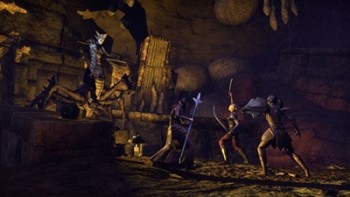 Earlier this year, Modular looked at the first dozen tips for dungeon delving from Creighton Broadhurst of Raging Swan Press. Today, we follow up and tackle thirteen more to get to 25. Good dungeon delving used to be a lot more important than it is today.

While characters seemed to die at a great pace in Gary Gygax’s original campaigns, for most of us who grew up on pen and paper, our characters were not disposable. We tried hard to keep them alive. Necromancer Games (who you surely read about here!) even put out a 3rd Edition D&D supplement, Raise the Dead, containing party quests to bring back that lost character.

In today’s MMO/video game world, death is simply something you undo by reloading the most recent saved game. A character can die dozens of times and we still get to play them over and over again.

But when death is a real threat, that party delving into the dungeons deep needs to employ strategies and tactics to accomplish the goal and get back out alive. Every character mattered (Kinda like, ‘No one left behind’ as a party slogan). So, here are thirteen more tactics to add to the first dozen to help keep your party alive.

13) If it looks like a trap, charging into it may not be the best option. 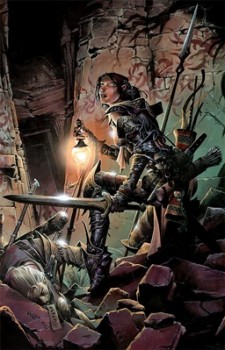 Well, yeah. But you can probably expand that to, if it looks suspicious, there’s probably a reason. A party I was recently running through a Swords & Wizardry campaign came upon a door in the side of a cliff, out in the wilderness near a swamp. After some arguing…that is, discussion… the Ranger simply walked up and knocked on the door. Which was opened by an annoyed Ogre. With a bear. Now, had the Thief checked for traps, he would have found a bell alarm system. An example of something out of place being worth some serious thought.

Back to the light maxim (see #2). If your torch goes out and that’s all you had, you’re screwed. Likewise if your lantern breaks or you run out of oil (some GMs make resources matter). You want something beyond that primary light source. Largely irrelevant in the video game world, torches and lanterns were as much basic equipment as swords and armor in the early pen and paper days.

15) Oil has many uses beyond fueling lanterns. Flaming oil can injure foes, while oil pooled on the floor can cause enemies to slip and fall. Oil can also be used to stop door hinges and the like squeaking (see #1) when opened.

Speaking of oil…The party I mentioned above recently set a barrel on fire and rolled it into a moss/fungus-filled room to clear a path to the door. Setting things on fire is often a viable, though not necessarily smart, option. Oil helps with that.

16) Know your role in the group and stick to it.

Ah, dungeon delving advice from The Rock. Can’t go wrong! We’ve all seen it before. The Cleric, who is supposed to be the healer, keeps diving into front line combat. The Rogue, who really should be using a bow on spell casters, keeps trying to backstab the fighters. In his fascinating book, Role Playing Mastery, Gary Gygax talks about the need for players to take into account the party’s needs when rolling up characters. Out of that flows the sensible proposition should come the idea that a character should perform the functions expected of them in the group. 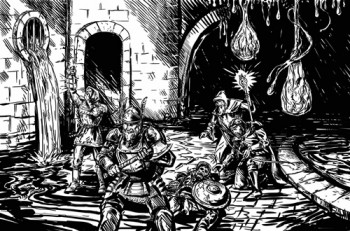 17) For a delve, always have a goal or objective. Knowing what you are trying to achieve helps you to prepare.

I guess I never specifically thought about that. The GM usually tells you at least roughly what you’ll be doing: killing the necromancer, exploring the giant toads’ swamp – whatever. When we played Ravenloft, we made sure we had a Cleric. A long outdoor trek could use a Ranger. But if you know specifically what you’re setting out to do, it should help if you’ve prepared as well as you can. This is similar to #4. The aforementioned Role Playing Mastery book contained a mini-section on tactical mastery. #1 was Know the Goal. #2 was Define the Objectives. Pretty fundamental stuff from the co-creator of the game.

18) Fighting in water more than a couple of feet deep is almost always a bad idea.

Well, you don’t know what’s in that water. You are probably going to be hindered in movement. If you fall down, it’s going to be worse than if you fell on the ground. Overall, seems like smart approach. Creighton’s Raging Swan Press has a couple adventures where water level is a factor, such as Dark Waters Rising and The Sunken Pyramid.

19) Always make a map. It doesn’t have to be super accurate or a work of art, but it does need to be good enough for you to find your way about. It might also help you spot secret doors, hidden areas and more.

When I quit playing pen and paper, I dismissed mapping from my mind. PC games had incorporated automapping (there wasn’t any of that in Temple of Apshai!). But when I started playing D&D, graph paper was as essential as dice and a character sheet. The further you advance on the map, the more important it is to have one! 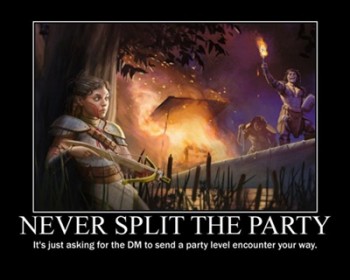 To be addressed in detail in a post on ‘Successful Dungeon Adventuring.’ Basically, when you split the party, you decrease the amount of firepower and resources available. Unless you’re under some kind of time constraint, keep the party together.

21) Expect things to go wrong. Have a plan for when they do.

I doubt folks spend much time on this one. It’s certainly not a part of the MMO/video game culture, where you just blaze through things and death is barely an inconvenience. But I guess you could plan on a ‘situation by situation’ basis. Or plan a few moves ahead.

22) You don’t have to kill everything. Sometimes, diplomacy or stealth is the best option.

Tim Klask was one of the first players in Gary Gygax’ dungeons (and also one of the first TSR employees). He enjoyed great success, to Gygax’ consternation because he followed this maxim. He related that Gygax had designed his early dungeons for several characters, with hirelings (hirelings were extremely common in the early days).
He would go solo (I think he played a wizard) and was able to sneak around. If he came up on something he didn’t like, he just found an alternate path. So, he scouted things and then picked and chose what he wanted to encounter. And because Gygax hadn’t thought of that approach, Klask’s character advanced “all the way” through the dungeon successfully. He didn’t try to fight everything, which is what the other players did.

23) Fighting while climbing is almost always a bad idea.

Yeah – It’s hard to imagine this being a best option, or even a decent one. I don’t think Conan even did this much. Not much to say here, really.

24) Teamwork is your most important skill; practice it rigorously.

I talk about how, being a Christian, you have to acknowledge it’s not all about you. There’s something greater than you. Putting the party first is an important element of RPGing. It’s not all about you. And if the whole party accepts that, then working together, instead of alone, should be routine. An adage I learned as an Ultimate (Frisbee) player, was “You play at tournaments the way you play at practice.” If the party constantly works
together, it will become routine. And that can be the difference between life and death in a crucial situation.

25) Running away is a good skill to develop. Sometimes you are outmatched and if you fight you will die. You can always come back later for revenge.

You’re not going to win every confrontation. And surrender isn’t usually a favorable outcome. He who fights and runs away lives. Period. That can be enough. Simply put: running away or staying can be the same as living or dying.

We’ll have another post devoted entirely to running away. It’s a tactic that has lost appeal in our PC/MMO/video game culture, but for pen and paper, where death is more than a temporary, minor inconvenience, it’s a basic tactic.

So, combined with Part One, Creighton Broadhurst has given you 25 tips to successful dungeon delving and Modular has explained why they are good tips. Happy exploring!