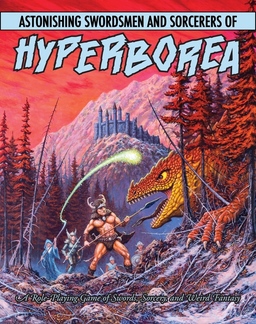 Back in December of 2012, Black Gate head honcho John O’Neill wrote a glowing post about Astonishing Swordsmen & Sorcerors of Hyperborea (for ease of typing, we’ll go with AS&SH from here on in). AS&SH was created by Jeffrey Talanian, who co-authored Castle Zagyg with Gary Gygax (The Zagyg saga is worthy of a post in itself).

AS&SH came out of Original Dungeons & Dragons (0E), created by Gygax and Dave Arneson. That is the version that my retroclone of choice, Swords & Wizardry, is based on. Talanian cited Robert E. Howard, Clark Ashton Smith and H.P. Lovecraft as his influences. So, we’re talking Pulp: weird pulp!

Fast forward to 2016 and Talanian has launched an already successful Kickstarter for a 2nd Edition of Astonishing Swordsmen & Sorcerors of Hyperboria. As I type this, with 22 days remaining, it is at 318% funding and is tearing through stretch goals like the Cimmerians at Venarium.

The book will be somewhere around five hundred pages and will include a 32” x “40 color map, as well as an introductory adventure. Ian Baggley’s popular art from the 1st Edition will be supplemented with illustrations from about a dozen new artists. If you like this style of art, AS&SH is absolutely worth backing. Check out the new cover!

This 2nd Edition includes new classes, spells, monsters and magic items, but is fully compatible with the 1st Edition. There are only four classes (Pathfinder players are desperately leafing through their core rulebooks, whispering, “It’s all right: here are the Brawler Archetypes. They can’t take that away from me”), but with 22 sub-classes.

I haven’t seen the 1st Edition, but since I’m a pulp fan and I play Swords & Wizardry, this sounds right up my alley. And I like to back Kickstarters that achieve lots of stretch goals, which this one is certainly on track for. I think this game will appeal to old school RPGers and to fans of those great pulp authors. The KS runs until November 20 (I think), so head on over and check it out!

Click here for links to my previous gaming posts.

I bought the 1st edition of AS&SH because of a Black Gate article and I’m a backer of the 2nd Edition. I haven’t had the chance to play it–my gaming group is too into 5E D&D. But I love the artwork and will steal anything I can to use in my 5E D&D campaign.

I loved the first edition and am backing the new one myself. I’ve used some of the subclasses and plopped them into whatever other OSR system I’m using…

Just played “The Rats in the Walls,” run by Talanian himself, here at Gamehole Con! Had a great time and scheduled for another game with him tomorrow. I’d be running AS&SH for my home game already, but my players won’t budge from Pathfinder!

I think Tom Knauss is running something Pathfinder there for Frog God.

I am sorely tempted. Not so much for the system (being a RuneQuester) but for the awesome looking and sounding material. The one thing stopping me is the campaigns cost for international postage.