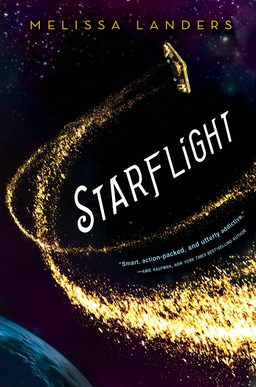 Protagonist Solara Brooks will steal your heart from the very first scene of Melissa Landers’ Starflight. Standing at a spaceport departure gate, she hopes to become a passenger’s indentured servant in order to travel to the fringe, the outer limit of human colonization. If she doesn’t get picked, she’ll have to wait a full year before the next ship heads out. Having been evicted from her group home, she’d become homeless.

That fate is looking more and more likely as every other candidate for indenture is scooped up before her, including an elderly man and a boy who won’t stop scratching his privates. Soon, she’s standing at the gate all alone, and almost all the passengers have boarded.

There’s a good reason why no one will hire her, though. She might just be a teen, but she’s already done hard time as a felon. When potential employers ask her to take off her gloves, they can see her knuckles, which are tattooed with conviction codes.

Her last chance arrives when rich boy Doran Spaulding saunters up the gate with his pink-haired girlfriend. Solara and Doran go way back: classmates at the same private academy, he has tormented her ever since she won the award he craved. The last thing Solara wants to do is jump whenever Doran calls. But she doesn’t have any other options. So when Doran offers to hire her as his personal servant, she accepts.

Wearing the master’s bracelet that matches Solara’s servant’s bangle, Doran delights in waking her in the middle of the night to do his bidding. There doesn’t seem to be any end to the indignities he can dream up – until he makes her take off her gloves. 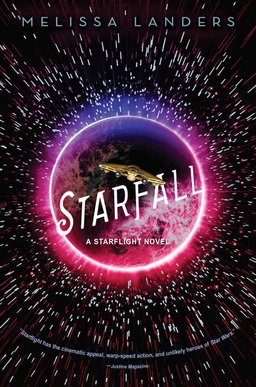 Seeing the conviction codes, Doran doesn’t just fire Solara. He forces her to leave the starship at a seedy outpost. Stuck in the middle of nowhere, her only possible future would be to whore herself. So she knocks Doran unconscious and uses his palm to purchase passage to the fringe on an ugly firetrap called the Banshee. She kidnaps him for good measure and swaps their bracelets. Turnabout is fair play: Doran is now the servant.

This YA sci fi novel will hook both teens and adults when it launches on the rollicking, madcap adventures of the Banshee. A salty old captain rides herd over the crew, which is comprised of a klepto first mate, a dreadlocked princess in hiding, and a would-be Casanova who can’t stop bickering with her. A delightful space opera reminiscent of Star Wars Episode IV: A New Hope and Firefly, the book is filled with ruffians, criminals, pirates, mercenaries, and assassins.

Melissa Landers is also the author of the Alienated series of YA sci fi novels. Hyperion released Starflight on February 2, 2016, as a 368-page hardcover. Direct your browser here to read an excerpt.

Although it is a standalone, a companion novel entitled Starfall was published on February 7, 2017.