Lots of great reading for short fiction fans in the back half of March. As usual, Michael Penkas did most of the heavy lifting on our magazine coverage, with in-depth reviews of recent issues of the Magazine of Fantasy & Science Fiction (two issues), Nightmare, Ellery Queen Mystery Magazine, and Asimov’s Science Fiction (two issues!). Fletcher Vredenburgh checked in with his regular February Short Story Roundup, plus reviews of two vintage SF novels originally serialized in Astounding SF/Analog: H. Beam Piper’s Space Viking and Mission of Gravity by Hal Clement. Matthew Wuertz contributed the latest installment in his long-run project to review every issue of the legendary Galaxy magazine, with a report on the September 1953 issue. And finally, we had a look at what happens when cats read science fiction magazines.

END_OF_DOCUMENT_TOKEN_TO_BE_REPLACED 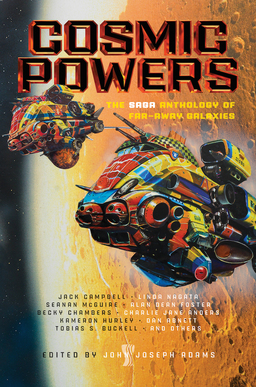 John Joseph Adams has edited two previous Saga Anthologies: Loosed upon the World: The Saga Anthology of Climate Fiction (2015) and What the #@&% Is That?: The Saga Anthology of the Monstrous and the Macabre (2016). His latest is a collection of epic SF tales “for fans who want a little less science and a lot more action, inspired by movies like Guardians of the Galaxy and Star Wars.” It contains brand-new fiction from the top authors in the genre.

Okay, I try to be objective in these future-book summaries, but I think JJA and Saga Press have just discovered the keys to my heart. There have been some terrific anthologies published in 2017 (and the year is still young) but, dang. Already this one looks like my favorite.

END_OF_DOCUMENT_TOKEN_TO_BE_REPLACED

Well, here it is, the last day of March. And those promises I made to myself that I’d sample all the terrific recommendations for the month that’ve already stacked up — like Andrew Liptak’s 23 Science Fiction and Fantasy Novels to Read this March, and John DeNardo’s 11 Can’t-Miss SF and Fantasy Books in March? Yeah. Pretty much a total failure.

What to do? Try with one more list, of course! Hope springs eternal, and March still has a few hour left.

Over at io9, Cheryl Eddy has compiled a list of 19 new March releases, including books by Alex Bledsoe, Seanan McGuire, Ada Palmer, Paul Cornell, Tim Lebbon, Cassandra Rose Clarke, Ian McDonald, and many others. Let’s dig in and see what catches my eye (and also, is short. ‘Cause the clock is ticking.)

END_OF_DOCUMENT_TOKEN_TO_BE_REPLACED 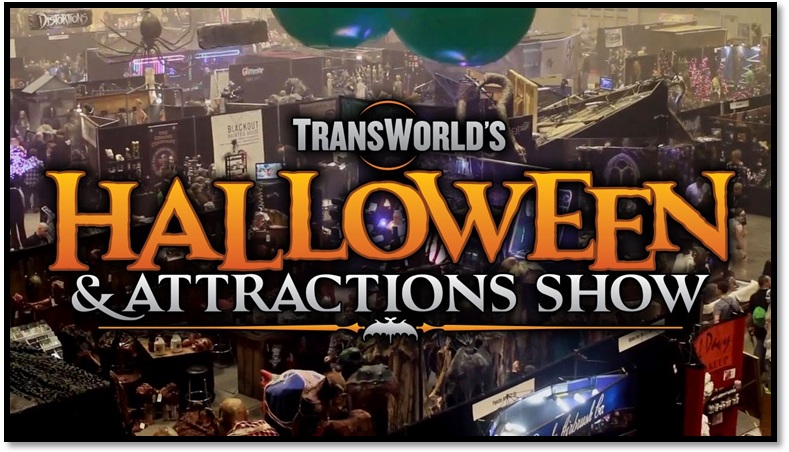 Hard to believe Goth Chick News has been covering the Haunted Attraction Association’s Halloween show for sixteen glorious years, but as Black Gate photog Chris Z and I once again headed south from Chicago at 5 a.m. toward St. Louis, it didn’t feel like it had been that long at all.

Needless to say, not only does the HAA loom large professionally, the people we’ve met along the way mean it has a special place in my little black heart.

END_OF_DOCUMENT_TOKEN_TO_BE_REPLACED 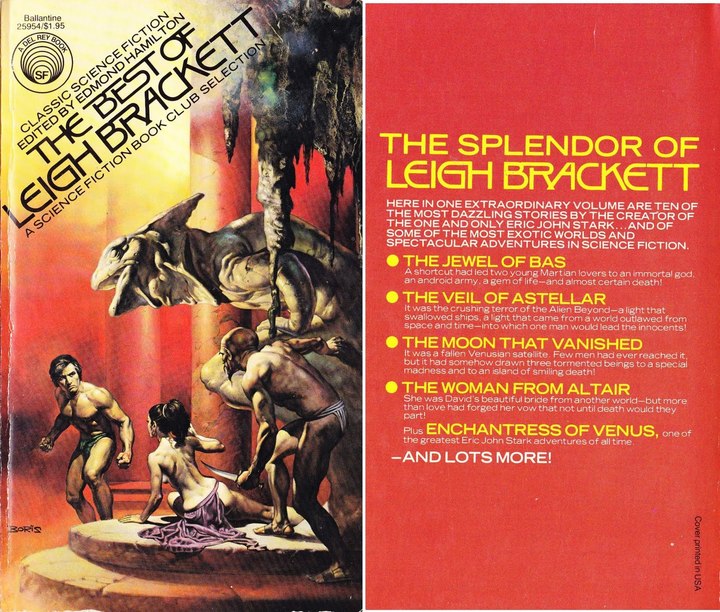 Over at Adventures Fantastic, the distinguished Keith West visits a topic near and dear to our hearts: the Ballantine Best of series, perhaps the most important line of paperback collections the genre has ever seen. The 21 volumes of the Ballantine Best of series introduced thousands of readers to the best short fiction by the greatest SF and fantasy writers of the 20th Century — and more than a few writers who have now been forgotten. Here’s Keith:

So why did I say we need the Ballantine series more than ever? Because of the way it captured the literary history of the field. There’s no one today who writes like Cordwainer Smith. Or Stanley G. Weinbaum. Or Eric Frank Russell. These writers were the trail blazers and pioneers of the genre, folks for whom an entertaining story wasn’t just a good thing. It was how they made a living.

James McGlothlin has been reviewing the series for us, one book at a time. Our previous coverage includes the following 16 volumes (listed in order of publication).

END_OF_DOCUMENT_TOKEN_TO_BE_REPLACED 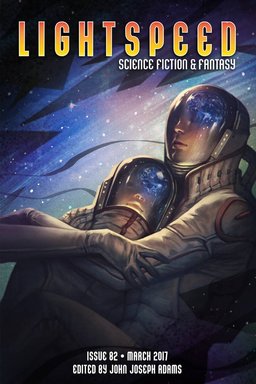 I don’t get to read Lightspeed magazine as often as I like, but the March issue looks like a good place to play catch up. Here’s Charles Payseur at Quick Sip Reviews on “The Worldless” by up-and-coming author Indrapramit Das.

This is a lovely and complex story that unfolds in a port, in a place between places, where gravity isn’t quite high enough and Dunyshar, those without a world, live and work and die and dream of something more. The story focuses on two people, NuTay and their offspring Satlyt, as they scrape a life together. And I love the way that the story evokes place and the feeling of being detached from place. Orphaned in some important way. Without a culture because culture is associated with planets and not with ports, the place that ships are only ever moving through. It’s obvious from the story that some not-great-s#!t is happening and I like that this is revealed slowly, revealed with all the terrible weight of it… An amazing read!

The exclusive content in the ebook version this month includes an exclusive reprint of Holly Phillips’ novella “Proving the Rule,” and an excerpt from Taiyo Fujii’s novel Orbital Cloud.

The cover this month is by Reiko Murakami, illustrating Indrapramit Das’s story, “The Worldless.” Here’s the complete contents for the March issue.

END_OF_DOCUMENT_TOKEN_TO_BE_REPLACED 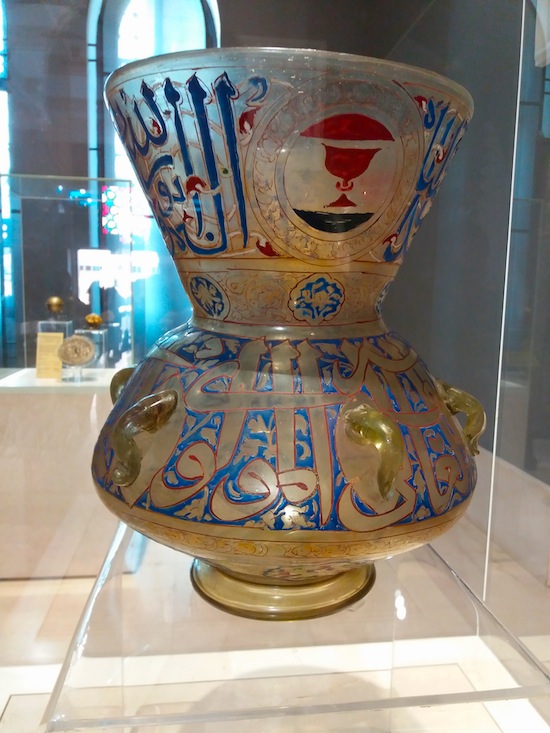 END_OF_DOCUMENT_TOKEN_TO_BE_REPLACED

In her new column for the New York Times, N.K. Jemisin turns the spotlight on four recent SF and fantasy releases, including a new Tor.com novella from Caitlin R. Kiernan.

CaitlÍn R. Kiernan has long been hailed as one of the pre-eminent authors of weird fiction, and her new novella, Agents of Dreamland (Tom Doherty, paper, $11.99), shows why. In this recursive, Lovecraft-inflected police procedural, two agents of the shadowy government group Y pursue the cult leader Drew Standish, whose activities seem to herald a Jonestown-like mass murder. But far more important than whether the killing can be stopped is whether it’s already too late, since the manhunt coincides with the appearance of a deadly extraterrestrial fungus. The clock is ticking, the Elder Beings have been invoked and possible futures have begun to solidify in ways that spell the end of humanity….

Kiernan’s writing — starkly visual, tongue in cheek and disturbingly visceral — carries the day as the story churns toward its uneasy conclusion. And since the door is left open for future stories (and other futures) featuring Immacolata and the Signalman, let’s hope Kiernan will delve further into their adventures.

A few weeks ago I bought God Save the Queen, the first book in Kate Locke’s Immortal Empire series, heartily intrigued by the back cover text.

The undead matriarch presides over a Britain where the Aristocracy is made up of werewolves and vampires, where goblins live underground and mothers know better than to let their children out after dark.

Xandra Vardan is a member of the elite Royal Guard, and it is her duty to protect the Aristocracy. But when her sister goes missing, Xandra will set out on a path that undermines everything she believes in and will uncover a conspiracy that threatens to topple the entire empire.

The first in a fantasy series where vampires, werewolves, and goblins rule London.

God Save the Queen was published in mass market paperback by Orbit on January 31, 2017. I was surprised to find that the next two in the series, The Queen is Dead and Long Live the Queen, were released in rapid succession on February 28 and March 28. A little digging, however, and it all makes sense. The books were originally released in hardcover in 2012/2013; this is a re-release with a fresh design and new covers.

END_OF_DOCUMENT_TOKEN_TO_BE_REPLACED

The tireless John DeNardo is back with another list, this time looking at the Can’t-Miss SF and Fantasy titles in March (and he should know). Here’s a few of his recommendations.

In the not-too-distant future, New York City’s streets are submerged underwater due to climate change, making every street a canal, every building an island unto itself. Intrigue abounds in the Met Life tower, now converted into a co-op, and the target of a buyout from a shadowy corporation desperate enough to sabotage the building’s infrastructure… Robinson weaves a tapestry of interconnected personal narratives that is captivating for its portrayal of humankind.