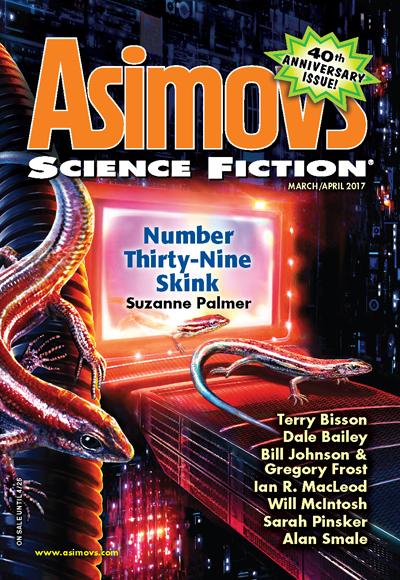 Asimov’s continues its 40th anniversary celebration with its March/April issue. Thirteen stories, half a dozen poems, and plenty of little asides about what the magazine means to the various contributors.

It begins with “Soulmates.com” by Will McIntosh, a story about love in the digital age which reads like it was meant to be charming, but came off rather creepy. Both characters behave like vengeful stalkers at different points in the story and it all got tied up far too neatly, with the one of the characters essentially “hacking” all of the problems away.

Next up is “Number Thirty-Nine Skink” by Suzanne Palmer. The story concerns a robot designed to colonize an alien world by producing perfect duplicates of various Earth lifeforms and dispersing them across the planet’s surface. The robot continues with this project, despite most of the colonization crew leaving and the only human who stayed behind dying. On top of the robot coping with the concept of loneliness, there are also some native lifeforms that object to a robot that mass-produces invasive species. This one’s a bit tricky to follow at first as the reader figures out what’s going on. The cover art by Tomislav Tikulin depicts a scene from this story.

Next up is “Three Can Keep a Secret …” by Bill John and Gregory Frost. Strip out the mimic suits and space travel and what you’ve got is a basic caper story in which a professional assassin is hired by two separate clients to kill one another. Like the best capers, the solution is right there in plain sight, but not obvious until the story’s end.

“The Ones Who Know Where They Are Going” by Sarah Pinsker is less of a science fiction piece and more of a thought experiment on the virtues of sacrifice.

Next up is “Invasion of the Saucer-Men” by Dale Bailey, another piece in an ongoing series of stories based on the titles of old sci-fi and horror movies. The basic premise is that ALL of those old fifties alien invasion films were based on true stories, so that every time a new group of aliens appears in a cornfield somewhere, the local teenagers know that it’s up to them to handle things.

“Kitty Hawk” by Alan Smale is my favorite story of the issue. This is one of those alternate history pieces, this time exploring what would have happened if one of the two Wright Brothers had died during one of the early experiments in developing flight. While some of the developments are predictable, the whole thing wraps up with a final paragraph coda that’s surprising, but completely understandable given the story.

“Cupido” by Rich Larson is another story in which we’re expected to sympathize with a protagonist in love. Like “Soulmates.com”, I found this character’s actions to be so objectionable that it was difficult to find him endearing. This isn’t to say that it wasn’t a well-written story with a nice plot twist in the middle, but the “sacrifice” made near the end doesn’t seem particularly commensurate with the character’s previous misdeeds.

“A Singular Event in the Fourth Dimension” by Andrea M. Pawley is a story about a robot child surrogate dealing with the prejudices of a family member. There’s more than a little bit of the plot from the film “A.I.” being recycled here and the change of heart near the end seems a bit contrived, but the characters are otherwise well-defined.

“The Wisdom of the Group” by Ian R. McLeod plays with the trope of “precogs getting rich off their talents” in much greater detail than most writers do. First of all, the method by which the future predictors are discovered and gathered together makes perfect sense (basically being part of a statistics project rather than the usual paranormal research set-up). Second, the mechanics of how such a group of people would function over years of time is explored, especially if no one involved ever figures out how or why they’re so effective at predicting the future. Finally, the O. Henry style twist ending is subtly hinted early in the story and perfectly ironic.

“After the Atrocity” by Ian Creasey may seem a bit heavy-handed in its message, but it does play up on the question of what defines our opinions. Basically, how many of us would change a long-held ideal if we were confronted by one shocking event? Once again, we’ve got a nicely ironic “twist” ending that makes perfect sense within the context of the story.

“Goner” by Gregory Norman Bossert is about a young man who wants to be a space explorer, despite the strange sacrifices that are needed to make the trips.

“We Regret the Error” by Terry Bisson is written as a series of retractions published in a newsfeed. Each retraction provides a clue to some great calamity that is happening “behind the scenes” before it’s finally revealed.

The issue wraps up with the novella “Tao Zero” by Damien Broderick. While I grasped the basics of this piece, I found that the writer simply crammed too much information into the narrative for me to follow along. There’s a time-hopping tesseract, an artificial intelligence going through a strange sort of evolution, some unorthodox manipulation of the Tao Te Ching, and basically a lot of philosophy thrown in. I’m sure that plenty of people would find the challenge of unpacking all of the different references in this story to be fun in and of itself, but it all just kept pulling me out of the basic narrative until I had no idea what was going on by the end.

For more information on this issue, as well as how to order print or digital copies of it, check out asimovs.com. Otherwise, why not support your local bookstore or newsstand by picking up a print copy?

Michael Penkas has been writing horror, mystery, science fiction, and fantasy stories for years. His first mystery novel, Mistress Bunny and the Cancelled Client, is available in print and electronic editions. Learn more about his work at http://www.michaelpenkas.com.

Is “The Ones Who Know Where They Are Going” a response to “The Ones Who Walk Away from Omelas?” I assumed that when I read the title.

John, I never read that story, but looking at a summary of it, yes, that makes sense.

It may well be my favorite SF story, so that’s why I remembered.

If it’s true that Sarah wrote a tribute that also works just fine as a standalone tale, that will definitely be a treat!

The Pinsker story is basically “Omelas” from the perspective of the sacrificial child in the basement. It’s very, very powerful.