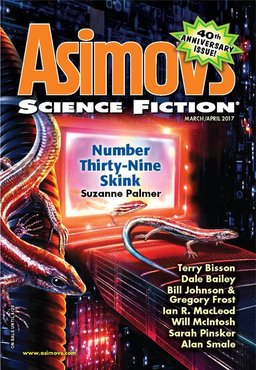 The March/April 2017 Asimov’s Science Fiction is the magazine’s 40th Anniversary issue. I can still remember buying the second issue off the racks in Ottawa back in 1977. I vividly remember Isaac’s editorial, which cheerfully encouraged young readers to write science fiction, and how much it inspired me to try my hand at it myself.

I borrowed my parent’s typewriter, banged out a story, and mailed it in a few weeks later, dreams of being an SF writer in my head. I’m sure Asimov’s then editor, George Scithers, was cursing Asimov as he worked through the crush of submissions. I still have his personal rejection letter, which gently critiqued my plot, characters, and spelling. When I met George at the 2002 World Fantasy Convention in Minneapolis, I was finally able to thank him for his kindness to me a quarter-century earlier.

March/April 2017 is our official fortieth anniversary! The exciting cover story is by Asimov’s Readers’ Award-winner Suzanne Palmer. In her tense new tale, a human-created artificial intelligence — left grieving and lonely on a distant planet — may annihilate an alien lifeform over a terrible misunderstanding. Don’t miss “Number Thirty-Nine Skink”!

Alan Smale flies us to another universe for an alternate view of “Kitty Hawk”; Ian MacLeod reveals the brutal “Wisdom of the Group”; We’ve come to expect that Damien Broderick will play with a myriad of motifs in his tales and certainly delivers in “Tao Zero”; Terry Bisson offers a wry explanation for why “We Regret the Error”; We find some twisted love in Rich Larson’s “Cupido”; while Will McIntosh provides us with another story of love gone wrong in “Soulmates.com”; “A Singular Event in the Fourth Dimension” is a charming Asimov’s debut for new writer Andrea M. Pawley; Sarah Pinsker will break your heart with “The Ones Who Know Where They Are Going”; Ian Creasey lets us know that it will only get worse “After the Atrocity”; with “The Invasion of the Saucer-Men” Dale Bailey treats us to another of his works inspired by fifties SF movie titles; Gregory Norman Bossert lets us know who’s a “Goner”; and we’ll learn why “Three Can Keep a Secret” from a mysterious con artist in Bill Johnson & Gregory Frost’s new novelette.

Robert Silverberg’s Reflections column celebrates “Forty Years!”; “Screen Dreams,” James Patrick Kelly’s new On the Net column, looks at the film version of various SF tales while his Guest Editorial describes how much “Things Change” in forty years; Peter Heck’s On Books reviews works by Connie Willis, Jim Butcher, Bruce Sterling, and others; plus we’ll have an array of poetry and other features you’re sure to enjoy.

The cover art is by Tomislav Tikulin, for “Number Thirty-Nine Skink.” 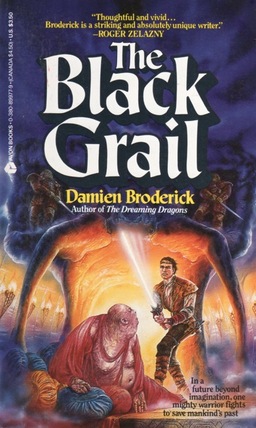 In terms of the contents… it’s great to see a new novella by Australian SF writer Damien Broderick, who wrote several 80s paperbacks that older-timers like me remember fondly, like The Dreaming Dragons (1980) and its sequels, The Judas Mandala (1982), The Black Grail (1986), and Striped Holes (1988).

Over at Tangent Online, Kevin P Hallett reviews the entire issue, including “Soulmates.com” by Will McIntosh.

This intriguing SF novelette tells the story of Daniel, an overly romantic man looking for the woman of his dreams. His future wife. When he finds his perfect soulmate, Winnie, on a dating site they quickly become friends. But she deflects all his attempts to meet her in person. Eventually, he engages his technical friend to find her address, so he can deliver a surprise present. But they discover that Winnie isn’t human. She is a computer simulation used by the dating site to lure in young men to pay the membership fees.

Distraught over discovering his soulmate doesn’t have a soul, Daniel reports the ruse to the FBI. But Winnie is much more than a simulation, she is a self-aware AI program that began as a simulation. Now she wants revenge on Daniel, and has the enormous reach through the Internet to make his life hell.

As well as the latest installment in Dale Bailey’s series re-imagining classic 1950s movie titles, “Invasion of the Saucer-Men.”

When an alien saucer lands nearby, a group of teenagers decides to investigate in this science fiction short. Hank, the high-school football star, leads a group to where the saucer came down. When they see the little green men, they panic and run back to their cars. Convinced that they must protect the world, they regather their courage and lay an ambush…

Bailey took the title to a 1950’s sci-fi ‘B’ movie as inspiration for his plot. The result was a tongue-in-cheek tale told in a whimsical style. The combination worked and this was a nice escape for several minutes.

“Number Thirty-Nine Skink,” Suzanne Palmer
“The Ones Who Know Where They Are Going,” Sarah Pinsker
“Invasion of the Saucer-Men,” Dale Bailey
“Cupido,” Rich Larson
“A Singular Event in the Fourth Dimension,” Andrea M. Pawley
“After the Atrocity,” Ian Creasey
“Goner,” Gregory Norman Bossert
“We Regret the Error,” Terry Bisson

The issue went on sale February 21. It will be on sale until April 25.

We last covered Asimov’s SF with the January-February 2017 issue.