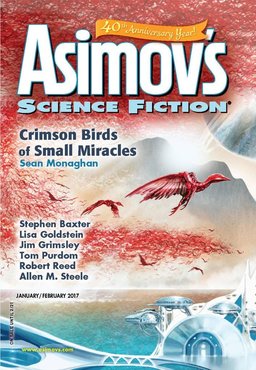 The January/February 2017 issue of Asimov’s Science Fiction marks the beginning of the magazine’s 40th year. I remember buying the second issue off the racks in the summer of 1977, when I was 13 years old. It was one of the first SF magazines I ever bought and, as Obiwan Kenobi put it later that year, it was my “first step into a wider world.”

The January/February 2017 issue is a landmark for another reason, as it’s the first issue in the new bimonthly format. I always enjoy the big double issues, and getting six of them a year is something I look forward to — especially since the magazine has added an additional 16 pages (bringing it up to 208), making it the thickest issue of Asimov’s in years.

We’re celebrating our fortieth anniversary all year long. The party starts with the super-stuffed double January/February 2017 issue! Two dramatic stories frame the issue. Allen M. Steele’s famous frontier planet, Coyote, has been settled for some time, but terrifying dangers still lurk around the bend of an unexplored river. Members of a scientific expedition soon learn that it takes more than bravado to survive “Tagging Bruno.” In Robert Reed’s new novella, crewmembers from the Big Ship encounter a very strange and very intelligent alien who puts their own spin on “The Speed of Belief.”

Octavia Cade escorts us to the Siberia of Stalinist Russia for “The Meiosis of Cells and Exile”; Jack Skillingstead arrives at a chilling “Destination”; Jim Grimsley paints a “Still Life With Abyss”; denizens of Fire Island will “Blow Winds, and Crack Your Cheeks” in John Alfred Taylor’s new story; Tom Purdom reveals the powerful strength of a “Fatherbond”; Robert R. Chase helps pick up the “Pieces of Ourselves”; Lisa Goldstein exposes us to “The Catastrophe of Cities”; Ray Nayler imbues a hazardous “Winter Timeshare” with new meaning; young people attempt a first contact with the help of Stephen Baxter’s mysterious “Starphone”; while beauty and sorrow are stunningly portrayed in Sean Monaghan’s evocative depiction of “Crimson Birds of Small Miracles.”

Robert Silverberg’s Reflections column gives “Two Cheers for Piltdown Man”; during an intriguing On the Net discussion, each participant lets James Patrick Kelly know he can “Ask Me Anything”; Paul Di Filippo’s On Books critiques works by Betsy James, Harry Turtledove, Will McIntosh, Ken Liu, Lavie Tidhar, and others; plus we’ll have an array of poetry and other features you’re sure to enjoy.

The cover art is by Maurizio Manzieri, for “Crimson Birds of Small Miracles.”

Over at Tangent Online, Jason McGregor reviews this issue’s big novella, “The Speed of Belief,” a new Great Ship tale by Robert Reed:

In this Great Ship story, we follow the mortal putative “sacrifice” Amund, the posthuman exobiologist Mere, and the posthuman diplomat Rococo, as they try to make their way over a blasted landscape to their exit ship in what was supposed to be a physical contact and negotiation with a species of giant protoplasms called “rivers,” but which actually live (partly) in them. The plan was to trade a few of the worlds in the rivers’ system for the human, which the rivers want for a sort of ceremony, but with the idea that the deal could be renegotiated to save the human. What seems to have gone wrong is a failure of nerve on the part of some or all of the rivers which resulted in a war and in an attack on the Shippers’ entry ship and an antagonism toward the Shipfolk from the survivors. The primary focus is on philosophical thoughts and character interrelations as they make their difficult, scary, and near-hopeless journey. And there are further twists in store before the end…

This is a story jam-packed with ideas in which the fate of entire species like the bal’tins is handled in a phrase. Like the best of the Great Ship stories, this paints on a canvas of huge time and space in which even gods take many years to travel from Ship to planet and make colonial plans on scales of centuries in an infinite journey of 300,000 year “years.”

And “The Catastrophe of Cities” by Lisa Goldstein.

When Beth and Lila were kids, they stumbled into a network of odd houses (sort of like multiplied combos of van Vogt’s The House That Stood Still and Heinlein’s “—And He Built a Crooked House—”) but Beth and Lila grew apart and away from weird-house exploring and eventually Lila (the outgoing wild one) disappeared. Now middle-aged, Beth has decided to find out what happened… a fun, exhilarating novelette.

“The Speed of Belief,” Robert Reed

The January/February issue went on sale December 21. It will be on sale until February 21.

We last covered Asimov’s SF with the December 2016 issue.

Our January Fantasy Magazine Rack is here. See all of our recent fantasy magazine coverage here.