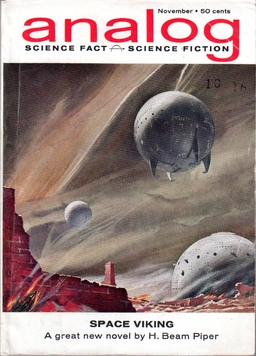 Over the past three-and-a-half years, I’ve written thirty-eight short story roundups (covering about 200 short stories) and one-hundred book reviews for Black Gate. The vast majority of what I’ve read has been swords & sorcery. As much as I love the stuff, I’m getting a little tired and I need to take a break. Not from reviewing, mind you, but S&S. A major point of reviewing was to get myself to read more, and I want to keep that up, but I need some variety.

With the encouragement of our esteemed editor, John O’Neill, I’m going to start by focusing on the science fiction books I devoured in my younger days, as well as some classics I missed the first time around (I just started Hal Clement’s Mission of Gravity). Books by C.J. Cherryh, Gordon Dickson, and Poul Anderson are among the first I’m thinking about reviewing. I hope we all have fun with this, and I’m looking forward to reading everybody’s own recollections about these works. So come along, and let’s get started with one of the foremost novels of the well-loved SF writer, H. Beam Piper: Space Viking (1963).

H. Beam Piper (1904-64) didn’t publish his first story until 1947. Until his death at his own hand, he published nearly thirty more stories and ten novels. Most were science fiction, but he also wrote several mysteries, and was a member of the Mystery Writers of America.

The larger share of Piper’s science fiction stories belong to his Terro-Human Future History. Over the course of about a dozen stories and seven novels, he told of humanity’s ascension to the stars, the rise and fall of the Terran Federation, and the subsequent birth of the Galactic Empire. His most famous work from this series is easily the novel Little Fuzzy (1962).

In the 37th century the Terran Federation is long-past. For over three hundred years, inhabitants from the Sword Worlds have raided the planets of the old Federation, dropping nukes and wiping out cities and their defenses from space, before landing and plundering them for anything of worth. As many of the planets have fallen backwards technologically, only a few are able to offer more than token resistance to the missiles rained down on them. On the surface, Space Viking is a story of revenge amongst Sword Worlders and piracy of the old Federation. 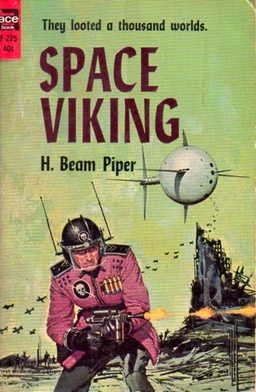 As he is about to be married, Lucas Trask, Baron of Traskon, and his bride, Elaine Karvall, are gunned down by the insane Andray Dunnan. Trask is wounded, but Elaine is killed. Dunnan, having plotted his strike for years and knowing Trask’s allies will come after him, steals the newly-built warship Enterprise. When he recovers, Trask sells all of his property to finance the completion of the Enterprise’s sister ship, names her Nemesis, and then sets out to do whatever he must to kill Dunnan.

From the title and the covers, it would seem Space Viking is nothing but a blood and thunder space opera adventure. Now there’s plenty of that on hand, but Piper seems to have been more concerned with the fallibilty and impermanence of human civilization. For every space battle, there are two or three discussions between the characters about the nature of civilization, and how it can be lost.

In order to supply his base of operations on the primitive planet Tanith, Trask raids the old Federation planet, Khepera. It is there he realizes the enormity of the life he has embarked on. After the thrill of seeing his and his allies’ ships coming down from the heavens around one of the planet’s major cities, a darker feeling grows in Trask as he watches events unfold:

Then the screenviews had begun coming in. The brief and hopeless fight in the city. He could still see that silly little field gun, it must been around seventy or eighty millimeter, on a high-wheeled carriage, drawn by six shaggy, bandy-legged beasts. They had gotten it unlimbered and were trying to get it on a target when a rocket from an aircar landed directly under the muzzle. Gun, caisson, crew, even the draft team fifty yards behind, had simply vanished.

Or the little company, some of them women, trying to defend the top of a tall and half-ruinous building with rifles and pistols. One air-cavalryman wiped them all out with his machine guns.

When the city is finally taken, it is sacked and left burning. Then the Nemesis moves on to another city with the same sort of results.

Disgusted with himself, Trask gradually formulates a goal other than just hunting down Dunnan. Without ever losing sight of his mission of revenge, he begins rebuilding civilization. He starts trading as much as raiding, and makes pacts and alliances with some of the more advanced planets. He funds building of schools, educating the citizens of backwards planets, and keeping the peace within his boundaries and along the trade lines of his allies. 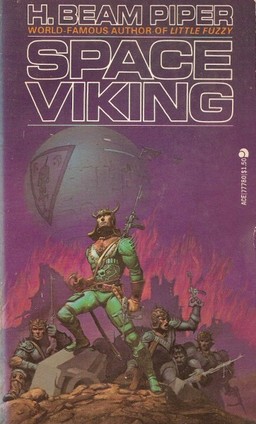 Over the course of years, he studies the planets whose civilizations have failed, and what it takes to build and maintain a society. Much of the middle part of the book is occupied with debates over and exploration of those ideas. Some worlds fell due to calamitous wars, but others crumbled more slowly. As is beginning to happen on the Sword Worlds, many lost their boldest and brightest to emigration, while on others they were swept away by revolution. Once lost, civilization began to falter until it could stand no longer.

Trask and his fellow Sword Worlders live in a feudal society. When asked how this isn’t tyranny, he points out that every citizen is armed, and if a lord goes too far — taxes too much — then he’s likely to end up dead. Since most of the menial work is done by robots, no humans do scut work, and all see themselves as free men with potential to rise above their birth station.

Trask, in turn, looks down his nose at the various democracies they encounter. He sees their citizens as fickle and greedy. Most politicians are unwilling to stand up and do the dirty work he considers necessary to preserve the greater good. This is driven home for him by events on Marduk, an old Federation planet that never suffered collapse. There, a Hitler-like demagogue rises to power throught licit and illicit means. With rabble-rousing rallies, mass media, and enough bribes to the right players, he gets himself elected. The opposition find out just how bad he truly is when he starts arresting them.

It’s clear that Piper was politically conservative and distrustful of politicians and liberalism. One of the few moments of levity in Space Viking comes at the expense of some politicians and social workers on Marduk. The way they bristle when Trask responds to their explanation of Markdukan economics with a joke about the Gilgameshers, a planet of hard-bargaining syncretic-Jewish traders, reeks of condescension and self-delusion.

Piper, though, doesn’t have much faith in Trask’s favored forms of government either:

“It may just be,” he added, “that there is something fundamentally unworkable about government itself. As long as Homo sapiens terra is a wild animal, which he has always been and always will be until he evolves into something different in a million or so years, maybe a workable system of government is a political science impossibility, just as transmutation of elements was a physical-science impossibility as long as they tried to do it by chemical means.”

“Then we’ll just have to make it work the best way we can, and when it breaks down, hope the next try will work a little better, for a little longer,” Bentrik said.

Despite these lengthy digressions, Piper keeps things moving with regular intervals of some of the best space opera starship combat I’ve ever read:

At a thousand miles, the missiles started going out, and the two groups of ships, four and five, were equidistant from each other and from the allied fleet, at the points of a triangle that was growing smaller by the second. The first fire-globes of intercepted missiles spread from their seeds of brief white light. A red light flashed on the damage-board. An enemy ship took a hit. The captain of the Queen Flavia was on a screen, saying that his ship was heavily damaged. Three ships bearing the Mardukan dragon-and-planet circled madly around each other at what looked, in the screen, like just over pistol-range, two of them firing into the third, which was replying desperately. The third one blew up, and somebody was yelling out of a screenspeaker, “Scratch one traitor!” 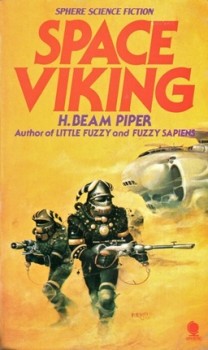 Space Viking is not without its flaws. Trask is the only real character, and there’s not that much to him. We never get more than a hint of the grief he suffers over the murder of Elaine or the horrors he inflicts on his victims. This is a man dropping nuclear bombs on cities and then letting hordes of armored troopers loose on civilians. His discourses on civilization and barbarism come close to exploring character, but more often than not, they read like an author-tract. Even the displacement of seeking revenge for building civilization doesn’t come in for more than cursory examination.

There are dated elements, or at least some that might strike a modern reader that way. Nearly everybody smokes, some even pipes. Technology, while the details are kept fairly vague, seems very much analog, not digital.

In other Future History stories women play significant roles, but not so in this book. I suspect it is an indicator of the nature of Sword Worlder society. Women clearly serve in combat and political roles on many of the planets Trask raids and trades with, but except for his dead bride and his unnamed doctor, we see few other Sword Worlder women.

So should you read Space Viking? Yes, yes you should. It may not be the best introduction to Piper’s Future History (that would be Little Fuzzy or the collection Federation), but it’s a solid one. It does a good job displaying Piper’s belief in the repetitious nature of history, something that comes up several times over the course of the series. It’s packed with scenes of stupendous destruction and mind-blowing action that will sear visions into your memory of molten cities and starships exploding. I haven’t read this book in about twenty years, and unlike some other revisits (I’m looking at your Tritonian Ring!) it did not disappoint. If you want to give it a shot, for a mere 99¢ you can buy the H. Beam Piper Megapack from Wildside Press and get almost all of Piper’s fiction. Or just download the free standalone version.

NOTE: There have been several sequels to Space Viking written by John F. Carr, Piper biographer and expert. I have no idea if they’re any good, but I’d love to hear from anyone who’s read them.

Space Viking is one I’ve never gotten around to, but I can’t wait to hear what you think of Mission of Gravity. It’s flippin’ awesome.

Easily one of my favorite Piper novels. His ruminations on the basic ungovernability of the human animal are likely true. Piper was certainly no Utopian.

@Thomas Parker – definitely check it out. Yeah, Mission of Gravity is flippin’ awesome. With all the bad press Clement’s writing gets, I was surprised how much I loved it.

@deuce – As usual, spot on. Not a sign of utopianism in the book – just a sort of understanding of the hopeless, maybe irredeemable, nature of humanity.

[…] Fiction (Black Gate) Space Viking by H. Beam Piper — “There are dated elements, or at least some that might strike a modern reader that […]