Rich Horton continues his exploration of the Ace Double line at his website Strange at Ecbatan. His recently reviewed a pair of largely forgotten novels, Our Man in Space by Bruce Ronald, and Ultimatum in 2050 A.D. by Jack Sharkey, originally published in 1965 as Ace Double #M-117. In his opening comments, Rich highlights one of the more appealing aspects of later Ace Doubles — they remain inexpensive and easy to find.

Most of the previous Ace Double reviews I’ve done feature books I’ve chosen because I had at least some interest in one of the writers. This one was a lot more random — basically, it was inexpensive and it was available at a dealer’s table at a recent convention… I had never heard of Bruce Ronald, and while I know Jack Sharkey’s name well, from any number of stories in early 60s magazines, he’s never been a particular favorite of mine… Sharkey wrote four short novels, three of them (including Ultimatum in 2050 A. D.) serialized in Cele Goldsmith’s magazines, Amazing/Fantastic.

Our Man in Space is a very minor work of SF, but for much of its length it’s amusing enough… It’s about an actor, Bill Brown, who is hired as a spy for Earth, because of his acting skill and his resemblance to an Earth diplomat, Harry Gordon, who has been killed. Brown’s job is to impersonate Gordon, and to travel to Troll, where Harry Gordon has been hired by the officials of Troll to find out when overpopulation pressures will cause Earth to explode…

On Troll he manages to complete his assignment, and also to make time with the beautiful Galactic, who eventually dumps him …  more treachery is in store, from multiple planets, and it’s up to Bill Brown to implausibly save the day again… for a while it’s pretty good fun, though it does wear out its welcome rather. (There are a few seeming nods to Heinlein — the basic plot bears some points of resemblance with Double Star…)

Ultimatum in 2050 A. D. is set in the title year in “the Hive”, a sort of arcology, a huge building in which 10,000,000 people live. Life is apparently good there, except for the strict rules about “readjustment,” whereby one can be sent to the hospital for such things as voting the wrong way, not voting at all, or minor injuries. Lloyd Bodger is a normal young man, engaged to Grace Horton (nice name that!), occasionally in trouble for missing a vote or two … despite being the son of the Secondary Speakster, the number two man of the Hive. One night he almost misses a vote, until a girl gives him her place in line. Shortly later it becomes clear that the girl is wanted for treason … and against his better instincts, Lloyd decides to help her. Before long he finds himself embroiled in a resistance movement against the rulers of the Hive …

There is some treachery, some narrow escapes, and some loopy but almost fun ideas like the “Goons,” robots that enforce the Hive’s rules, and “Ultrablack,” a scientifically implausible induced absolute darkness. There’s a bit of sexual tension — Andra seems a real potential rival for Grace, who loves Lloyd but who Lloyd seems unsatisfied with. 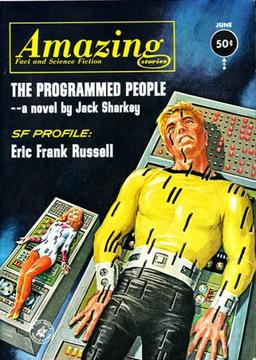 Our Man in Space has never been reprinted. As Rich notes, it’s Bruce W. Ronald’s only novel. ISFDB notes that he wrote only one other piece of SF, the short story “It Takes All Kinds” from the April 1967 issue of Frederik Pohl’s IF magazine.

Ultimatum in 2050 A.D. was first serialized in the June and July 1963 issues of Amazing Stories, under the title The Programmed People. It’s been reprinted once, as Armchair Fiction Double Novel #2, paired with William Carter Sawtelle’s Slaves of the Crystal Brain, in December 2010.

Rocannon’s World/The Kar-Chee Reign by Ursula K. LeGuin and Avram Davidson.
The Plot Against Earth/Recruit for Andromeda by Calvin M. Knox and Milton Lesser
Warlord of Kor/The Star Wasps by Terry Carr and Robert Moore Williams
The Sun Saboteurs/The Light of Lilith by Damon Knight and G. McDonald Wallis
Wandl the Invader/I Speak For Earth by Ray Cummings and Keith Woodcott (John Brunner)
The Sioux Spaceman/ And Then the Town Took Off by Andre Norton and Richard Wilson
Secret of the Lost Race/ One Against Herculum by Andre Norton and Jerry Sohl
Clockwork’s Pirates/Ghost Breaker by Ron Goulart
ATTA/ The Brain-Stealers by Francis Rufus Bellamy and Murray Leinster
The Ship from Atlantis/ The Stolen Sun by H. Warner Munn and Emil Petaja
Vulcan’s Hammer / The Skynappers by Philip K. Dick and John Brunner
The Ship That Sailed the Time Stream by G.C. Edmondson
Bow Down to Nul / The Dark Destroyers by Brian W. Aldiss and Manly Wade Wellman
Gateway to Elsewhere / The Weapon Shops of Isher by Murray Leinster and A. E. van Vogt
The Cosmic Puppets / Sargasso of Space by Philip K. Dick and Andre Norton
The Beast Master / Star Hunter by Andre Norton
Big Planet by Jack Vance
City Under the Sea by Kenneth Bulmer
The Forgotten Planet (Planets of Adventure) by Murray Leinster
Six Worlds Yonder / The Space Willies by Eric Frank Russell
Sentinels of Space / The Ultimate Invader by Eric Frank Russell and Donald Wollheim
Ring Around the Sun/ Cosmic Manhunt by Clifford D. Simak and L. Sprague de Camp
The Trouble With Tycho/ Bring Back Yesterday by Clifford D. Simak and A. Bertram Chandler
The Last Planet (Star Rangers) by Andre Norton
A Touch of Infinity/ The Man With Nine Lives by Harlan Ellison
Kirkus Looks at Donald A. Wollheim and the Ace Double
Tales of Outer Space/ Adventures in the Far Future edited by Donald A. Wollheim
The Pirates of Zan by Murray Leinster