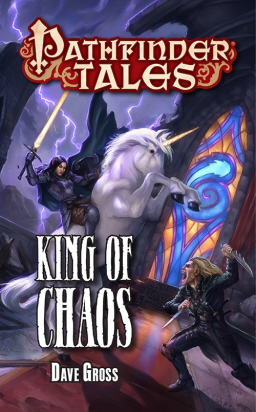 Dave Gross shot to the top of our fiction charts last month, with an exclusive excerpt from his new Pathfinder Tales novel King of Chaos. The halo affect also lifted his previous book in the series, Queen of Thorns, into an impressive 4th place.

There were a few other new faces on the list. BG regular Peadar Ó Guilín debuts in 6th place with his fourth story for us, “The Dowry,” the tale of an artist caught with a wizard’s daughter who soon finds himself in the body of a dog, and Michael Shea makes the list for the first time with his novella of Lovecraftian horror “Tsathoggua.” John C. Hocking leaps into the list despite the fact that his “Vestments of Pestilence” appeared with only two days left in the month, with a story that author James Reasoner called “An absolute joy to read… If you’re a fan of action-packed heroic fantasy, I guarantee you’ll be entertained.”

Ryan Harvey returns with his new Ahn-Tarqa tale “Stand at Dubun-Geb,” which Tangent Online called “A fun story that reminded me of Conan.” It joins the first Ahn-Tarqa tale in the Top 20, “The Sorrowless Thief,” published in April.

If you haven’t sampled the adventure fantasy stories offered through our new Black Gate Online Fiction line, you’re missing out. Every week we present an original short story or novella from the best writers in the industry, all completely free. Here are the Top Twenty most-read stories in September:

The Top fiction from August is here.

[…] also fabulous fiction. Last month, an excerpt of King of Chaos (Chapter One, introducing Oparal) hit their #1 spot, buoying their previous excerpt of Queen of Thorns (Chapter One, featuring Count Jeggare) to […]