The City of the Singing Flame (Timescape, 1981). Cover by Rowena Morrill

We’ve written a lot about Clark Ashton Smith at Black Gate. Like, a lot. Over two dozen articles over the last decade or so by my count, by many of our top writers, including Brian Murphy, Matthew David Surridge, Fletcher Vredenburgh, Thomas Parker, James Maliszewski, M Harold Page, Steven H Silver, John R. Fultz — and especially Ryan Harvey, who’s penned a third of our coverage all on his own.

I’m not an expert on Smith — far from it. Although he published in the pulp magazines I was obsessed with as a teen, I didn’t discover him until relatively late. He had no novels to his name, and was virtually ignored by the editors who assembled the ubiquitous science fiction anthologies I devoured in my youth (I know Isaac Asimov, whose name was on every second anthology I read, strongly disliked Smith’s work, and that was pretty much the kiss of death for SF writers in the 80s).

It wasn’t until David Hartwell, editor of the ambitious Timescape imprint at Pocket Books, reprinted much of Smith’s back catalog in a trio of handsome paperbacks that I corrected this injustice. And specifically, it wasn’t until I laid eyes on Rowena Morrill’s beautiful cover for The City of the Singing Flame in 1981 that I was finally introduced to the rich and fascinating work of Clark Ashton Smith. 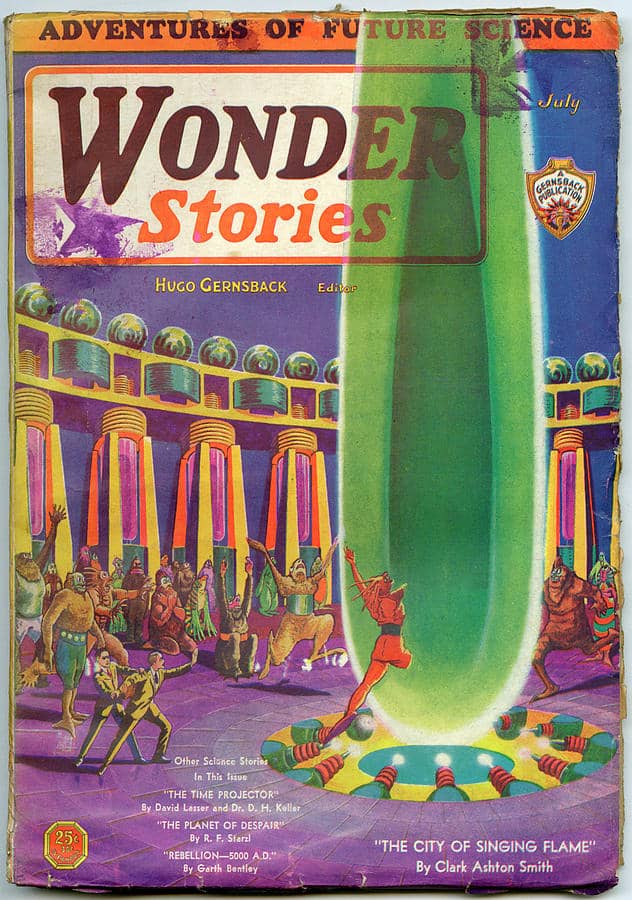 Wonder Stories July 1931, with “The City of the Singing Flame.” Cover by Frank R. Paul

What makes Smith’s fantasy simultaneously so unique and enduring? Here’s Brian Murphy on the title story.

Fantastic fiction author Giles Angarth discovers a portal to another world while spending the summer in a cabin in the Sierras. Passing through, he discovers an alien city of surpassing strangeness and wonder, from which emanates a siren-like music of ethereal beauty. At the city’s heart is a temple housing a swirling column of flame that draws various alien beings to it like the culmination of some great interplanetary religious pilgrimage. Angarth watches as the bravest step into the flame, and appear to, one after another, suffer instantaneous annihilation. But it also seems to promise, paradoxically, “a rapture of a moth-like death in its lofty soaring, the exultation and triumph of a momentary union with its elemental existence.”

Angarth manages to tear himself away from the scene and return to his cabin but the experience haunts his dreams. “The experience seemed, and still seems, incredible and unreal; and yet it has overshadowed everything else, and has colored and dominated all my thoughts.”

So what is this strange flame and its allure? Its ambiguity and potent symbolism are a few of those qualities which set Smith apart as a writer of weird fiction. Angarth only discovers the portal while summering alone in a cabin in the Sierras, a retreat into the world of his mind. The flame acts upon him with “captious thralldom and bewitchment, the insidious, gradual perversion of thought and instinct, as if the music were working in my brain like a subtle alkaloid.” When he leaves the first time Angarth finds it impossible to return to his stories; the poetic genius has left him, and he must find it again. Thus the flame can be viewed as the creative spark that possesses the most inspired of poets. Angarth is compelled to heed its call, abandoning the life he had known, regardless of earthly ties and obligations. Our bodies may be of perishable clay, but the imaginative power of mankind is eternal.

The story as it’s known today was originally a shorter piece, “The City of the Singing Flame,” followed by a sequel, “Beyond the Singing Flame;” both stories were published in Wonder Stories magazine in July and November of 1931, then as one in Arkham House’s CAS collection Out of Space and Time in 1942. The two-in-one story is now the definitive version…

In “City of the Singing Flame” we have a richer sense of the expanded consciousness which occurs at the height of hallucinogenic experience. Beyond the druggy atmosphere there’s also some fantastic invention: the Cyclopean city and its strange visitors (none of whom are ever a threat to the human observers), the otherwordly landscapes and transhuman sense impressions, and the unseen creatures intent on destroying the home of the Singing Flame who attack the city with a walking metropolis of their own.

All three books reprinted stories that had been collected many times over the decades, and have been reprinted numerous times since. But — like most things Smith related — all three remain highly collectible, and a tough find. They’re available on eBay and elsewhere, but be prepared to pay $20 or so for copies in good condition. Last month I purchased a complete set of all three in unread condition on eBay for $57, and was happy to find them at that price.

I talked about all three books in more detail here.

The Monster of the Prophecy (Timescape, 1983). Cover artist unknown

The City of the Singing Flame contains a fine sampling of Smith’s most popular work, including three Zothique tales (“The Black Abbot of Puthuum,” “The Garden of Adompha,” and “The Dark Eidolon,”) two Hyperborea stories (“The White Sybil” and “The Door to Saturn”), and two tales set in Averoigne (“The Enchantress of Sylaire” and “The Beast of Averoigne”).

Here’s a peek at Frank R. Paul’s interior art for “The City of the Singing Flame,” from the July 1931 issue of Wonder Stories. 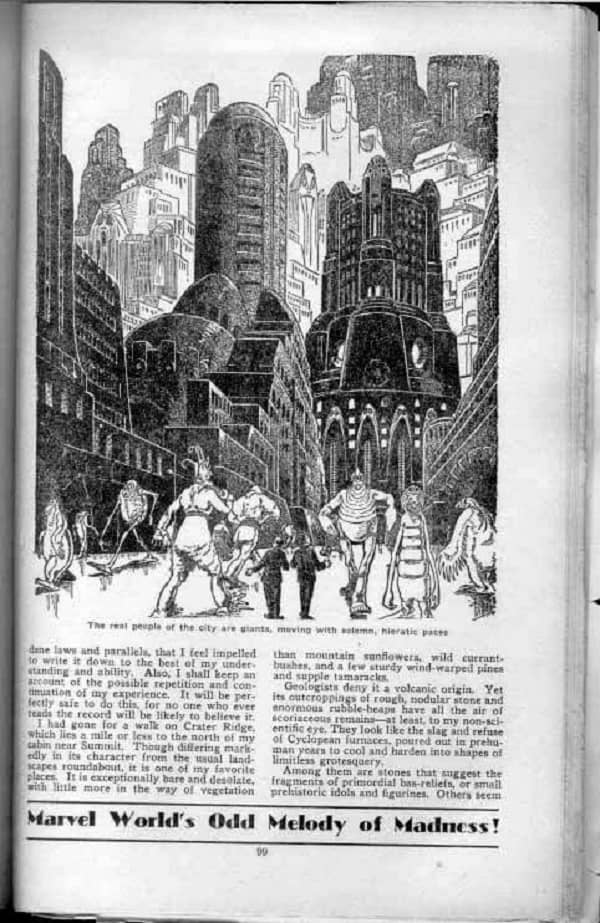 Interior art for “The City of the Singing Flame” by Paul

The City of the Singing Flame was published by Timescape Books in August 1981. It is 240 pages, priced at $2.95 in paperback. It has never been reprinted, and there is no digital edition The cover is by Rowena Morrill. Here’s the complete deets for all three books in the series.

Like probably all Smith enthusiasts, my collection was a mishmash of volumes – a couple of these Timescapes, some British Panther paperbacks, some Ballantine Adult Fantasy volumes, a couple of prized Arkham House hardbacks…all with an insane overlap of content; I had more then one book that I kept because it had just one or two stories that I didn’t have elsewhere. The situation was remedied when Nightshade published their awesome five volume Collected Fantasies, which I snapped up the instant they were published. I still have all those other books, though. It’s a sickness.

LOL. I know exactly what you mean. I’m a paperback collector with multiple versions of Smith’s catalog (Timescape, Arkham House, Ballantine, Bison Books, etc.) and I STILL knew I had to track down all the UK Panther editions when I saw the incredible Bruce Pennington covers on LOST WORLDS volume 1 and 2. We’re all in this together. 🙂 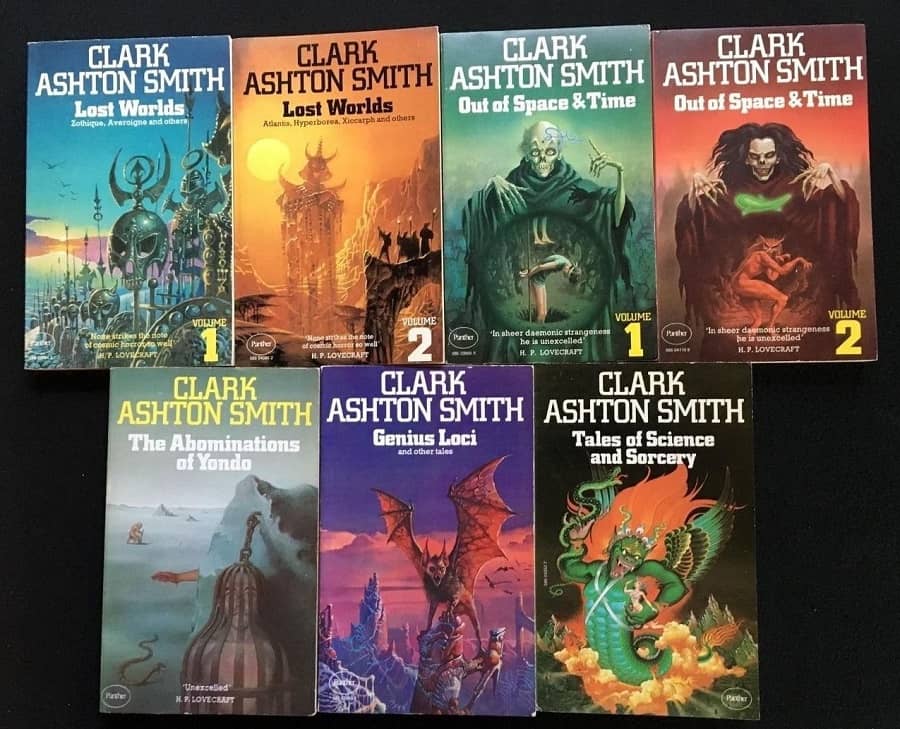 I have the two Lost Worlds John. Picked up #1 years back and then stumbled across #2 quite recently. Would love to lay my hands on the rest of the panthers.

Thanks for the great overview, in addition to the links to previous posts on Smith.

You’re most welcome Demos. There’s a lot of material to sift through on those links… if you haven’t read them already, Ryan Harvey’s 4-part The Fantasy Cycles of Clark Ashton Smith is a great place to start.

You might also want to look into two other hardcover publications from Night Shade, by Smith, with covers done by Jason Van Hollander, who did the covers for the 5-volume collection: “The Miscellaneous Writings of Clark Ashton Smith,” in the same format as volumes 1-5 (could it be considered volume 6?), and the more garishly colored “Red World of Polaris: The Adventures of Captain Volmar.” These may both be more for completists, but they’re nice complements to the 5 volumes of fantasies.

I got ’em both already, Smitty! Though “completist” is a mild word compared to those my family usually use to describe me…

Smitty – I love those Van Hollander covers, particularly the slightly more cartoony (buy still macabre) style he embraced for Captain Volmar. It reminds me of the brilliant work he did for the wonderful Ash Tree anthologies Acquainted with the Night and At Ease with the Dead. (See them here.)

After that, there was a very small used book store in town, and somebody must’ve disposed of a bunch of their old Ballantine Adult Fantasy titles there, because I found copies of Hyperborea and Poseidonis on the shelf, and snagged them immediately. (In addition to any number of other BAF titles, although at the time I didn’t really know what the BAF was — I just recognized the cover art on, e.g., some of the William Morris novels or some of the Carter anthologies.)

Then came the 1988 Arkham House collection A Rendezvous in Averoigne, with the lovely, lovely J.K. Potter artwork, which is probably my favorite single collection of Smith’s fiction.

These days, as Thomas Parker and Smitty below have mentioned, I have a mishmash of Timescapes, BAFs, British paperbacks, some Arkham House stuff (including his Black Book), and of course the Night Shades, of which I really need to go back and read the last couple volumes.

Joe — I’m glad you mentioned A Rendezvous in Averoigne, because it’s really the best single-volume CAS collection I’ve ever found. And that Potter wraparound cover is glorious. Smith certainly has been blessed with some gifted cover artists!

To say nothing of the interior illustrations!

Oh, and the other piece of the Smith puzzle — the three-volume Complete Poetry & Translations put out by Hippocampus Press a few years back.

There’s also the collection of Smith’s letters that Arkham House put out in 2003, and which I really liked. The Smith of those letters is completely different from the literary necromancer that you picture from the stories, instead being gossipy, chatty, and completely down-to-earth.

Good shout on the letters. Hippocampus also put out a volume or two, although I don’t know how much they overlap the Arkham House volume.

I can’t believe no one has mentioned the CAS documentary Emperor of Dreams that came out awhile back! Definitely worth checking out. Some who are interviewed there are no longer with us, such as Ellison and Pugmire. There’s even an audio recording of CAS reading his own stuff included at the end.

Apply to Amazon for your kickback, James. Going to watch it today!

Thanks AJ — this looks terrific!

Thanks James and AJ for these links. Totally missed this documentary.