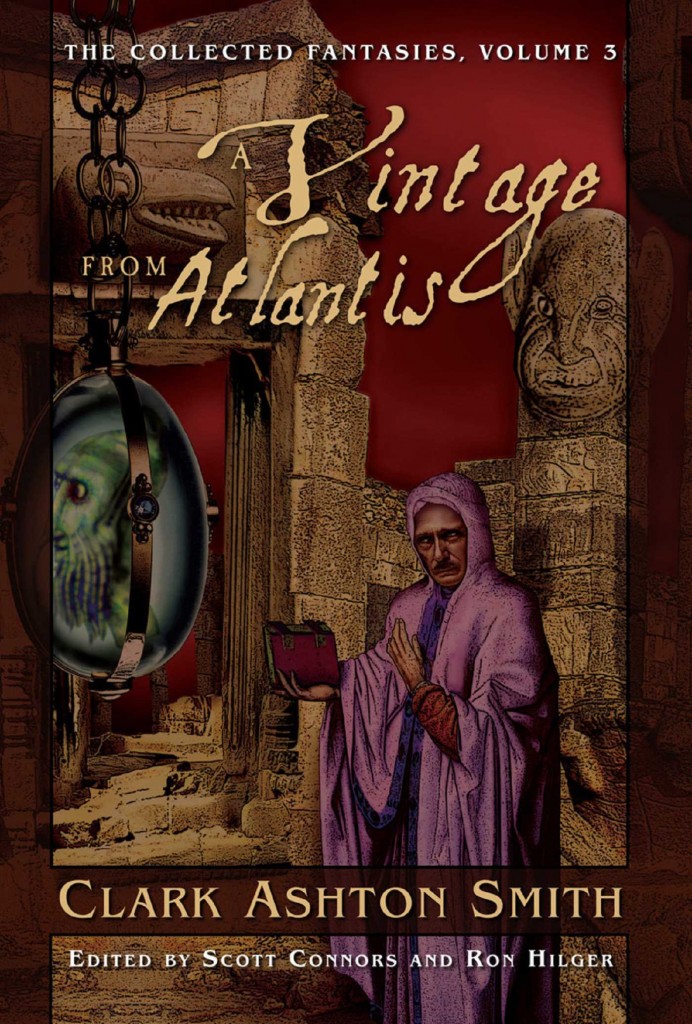 Clark Ashton Smith was approaching his writing peak and fortunate to have multiple markets open to his best work during the period of the stories in this volume (1931–32). Three magazines were publishing him on the regular: Weird Tales, Wonder Stories, and Strange Tales. The situation didn’t last; Smith suffered a slowdown when Strange Tales folded at the start of 1933. Without the Clayton Magazine, Smith lost a reliable alternative for whenever editor Farnsworth Wright at Weird Tales turned something down for being too outré or sexual. The deepening effects of the Great Depression pinched the surviving magazines and delayed payments. Wonder Stories, like any Gernsback mag, was dilatory enough with payments already. Although we’re approaching the CAS apex in this and Vol. 4, the omens of the end of his fiction-writing days are already clouding the cerulean skies.

Boilerplate recommendation for The Collected Fantasies: If you’re new to Clark Ashton Smith, these Night Shade editions aren’t the best starting point. I recommend the Penguin Classics collection The Dark Eidolon and Other Fantasies for readers who want to get started with a collection of some of Smith’s key short stories and poems.

Vol. 3 contains stories written over a little more than a year: April 1931 to June 1932. Each is listed with its original date and place of publication, sometimes in a modified form different from the corrected text the editors include here. Unlike previous volumes, every story reached professional magazine publication within a few years of composition, with the exception of “The Double Shadow,” which Smith self-published.

This is a decadent feast, and includes towering classics not only of Clark Ashton Smith’s career, but of the entire Golden Age of Weird Tales and Co. “The Vaults of the Yoh-Vombis,” “The Empire of the Necromancers,” “The Double Shadow,” and “The Colossus of Ylourgne” are masterpieces. “The Holiness of Azéderac,” “The Seed from the Sepulchre,” “The Demon of the Flower,” “Ubbo-Sathla,” “The Weird of Avoosl Wuthoqquan,” and “The God of the Asteroid” are strong runners-up.

I’ll start with a piece that has pride of place in Smith’s overall development, “The Empire of the Necromancers.” Written during the frustrations of his SF story sales troubles, this was the initial entrance into the setting that turned into Smith’s grand epic, Zothique. It’s the only Zothique tale in the collection, so I’ll have plenty more to ponder regarding the setting for Volumes 4 and 5. For now, I’ll say “The Empire of the Necromancers” is a near-perfect work of morbid beauty about the dead reclaiming their due from necromancers — the due of oblivion. Zothique was poised for ascendancy.

“The Colossus of Ylourgne” is Smith’s greatest story of medieval Averoigne, displaying the peak of what he could achieve when it came to necromantic sorcery in collision with the attitudes of the Middle Ages. This is a true epic that could easily be made into a feature film (well, not easily when it comes to broad audience appeal, but the material is there) and pours on heaps of charnel imagery climaxing in a titanic super-corpse rampaging across the countryside and descending on the city of Vyones. A medieval giant monster story filled with poetic prose and black magic — of course this is a Top Five CAS story for me, and my pick for Best in Collection.

The two other Averoigne stories are also memorable, if not at the performance peak of “Colossus.” I enjoy the tragicomedy time-travel tale of “The Holiness of Azéderac,” where Smith gets unashamedly romantic. His portrait of an evil sorcerer who’s actually extremely petty despite shouting a barrage of names of cosmic monstrosities is a hoot. “The Maker of Gargoyles” takes psychoanalytical sexual concepts and imbues them into living stone gargoyles perched on a cathedral in Vyones. Gothic good times.

I’ve previously written about “The Vaults of the Yoh-Vombis” as one of the best entry points for newcomers to Smith’s peculiar gumbo of genres. Our esteemed editor, John O’Neill, appears to agree. It melds together a science-fiction setting (Mars) with horror storytelling (brain-eating leech creatures) and the touch of the transcendental, ancient fantastic (alien ruins, the anti-horror ending). This may not be CAS’s best piece of fiction, but it’s arguably his quintessential one. This is the longer version, with the medical report used as a prologue rather than an epilogue.

The two Hyperborean stories are successes, although of widely separate types. “The Weird of Avoosl Wuthoqquan” (Smith’s prize-winner for tongue-twister titles) is another bituminous-black comedy of Hyperborea. It takes a basic morality tale about greed and ends it with a smirking monster who purposely undercuts the tone. The last sentence is a perfect encapsulation of the humor of the setting. “Ubbo-Sathla,” a vital contribution to the Lovecraftian Mythos, is prose poetry of the most delectable sort. It plunges readers’ minds back in time with a modern-day protagonist who finds the jewel of Hyperborean sorcerer Zon Mezzalamech and then reverts to the primordial origin of all life on Earth. The paragraphs describing Ubbo-Sathla itself are Platonic Ideal Form Clark Ashton Smith.

Rounding out the volume’s record of excellent stories in all of Smith’s major settings (Averoigne, Hyperborea, Zothique, Mars, Poseidonis) is “The Double Shadow,” the Poseidonis pinnacle. Smith thought highly enough of it to make it the title story of his first self-published story collection. It’s indeed an impressive work filled with suspense and dark sorceries, where evil manifests as a second shadow that starts to close the distance with a person’s real one, to eventual horrific results.

The science-fiction oriented stories are among the volume’s weakest, but “The God of the Asteroid” and “The Demon of the Flower” are exceptions. “The God of the Asteroid” captures a loneliness of existence Smith often explored in fantasy stories, coupled with the irony of a trapped, dying astronaut who becomes a god to two generations of short-lived alien beings. “The Demon of the Flower” is a vivid fable of a planet ruled by plant life that contains gripping descriptions of bizarre flora. It’s a far better planetary exploration story than most of the other SF sojourns in the collection.

Speaking of demon flowers, “The Seed from the Sepulchre” is an excellent standalone modern horror story with similar fantastic overtones — the weird allure of the skull-growing plant — to “The Vaults of the Yoh-Vombis.” It’s gross and hypnotic at the same time. Although by the time he wrote it, Smith realized he might be overdoing the “monstrous plant” theme, which also shows up in “The Seedling of Mars.” 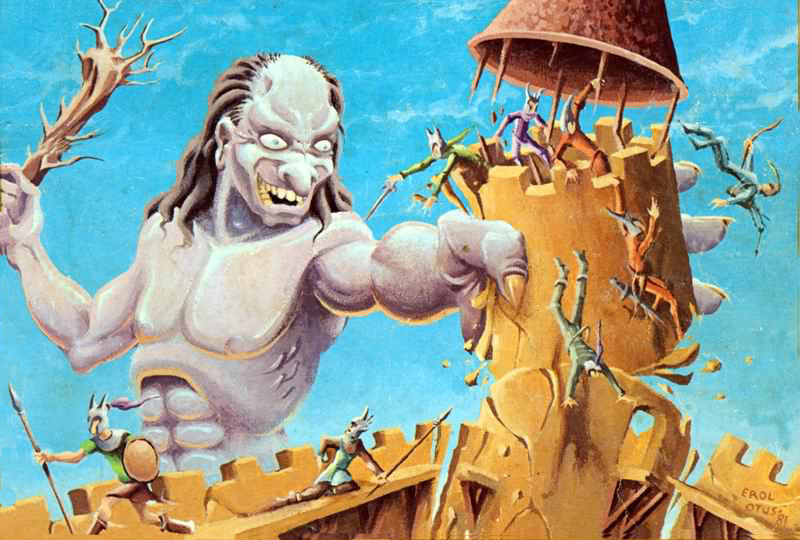 Among the classics here are a few SF tales aiming for different markets than Smith’s core magazines. Most don’t work, such as the overstretched “The Eternal World.” “The Immortals of Mercury” is an especially aggravating and overlong attempt to piece together an action-filled “super-science” tale in hopes the Astounding Stories editors might purchase it. (They didn’t.) Smith decorates the piece with a bizarre alien culture under the surface of Mercury, but it drags with chase scenes that don’t match his talents at all. “The Invisible City” uses a similar idea, only with less action, and manages to work better. But these two stories back-to-back in the collection constitute a slow patch for anyone reading straight through. It makes sense Smith would create Zothique right afterward: he needed to return to what he was best at.

Smith fared better with two science-fiction stories written at editorial request. He wasn’t comfortable with written-to-order work, but there’s worth in “The Seedling of Mars” and “The Plutonian Drug.” Although “Seedling” suffers from a trouble Smith often encountered with SF stories in which he wasn’t solidly invested — a meandering length as if the author was hoping to stumble upon something interesting — it has intriguing sociological science-fiction ideas that are a departure for him. “The Plutonian Drug” is mercifully the right length for its story of a man granted a vision of a few hours of his past and future, leading to an ironic conclusion. It leaves the reader with a feeling of satisfaction, but it’s unlikely to stick in long-term memory.

CAS revisits his popular “The City of the Singing Flame” (in Vol. 2) to far less success. The first story’s narrator, Hastane, follows his vanished friend into the world of Ydmos and enters the singing flame itself to travel through the inner dimensions. The problem with “Beyond the Singing Flame” is a diminishment of the mystery of the original, turning into yet another journey through the bizarre that’s less inspired than other of the author’s variations on this theme.

“The Supernumerary Corpse” is a great title. The actual story is an Edgar Allan Poe tale from the POV of a murderer, only with weird science tossed in. The narrator murders a man he hates, but the dead man somehow leaves two corpses. Nifty in concept, filler in execution. This might have worked for a supernatural detective story, but not for Clark Ashton Smith.

One story in the table of contents isn’t speculative fiction in any sense, “The Second Interment.” But it shares enough hallucinogenic images of the mythic and bizarre that its publication in the final issue of Strange Tales isn’t too absurd. If you want to delve inside the mental state of a man entombed alive — for the second time! — the story delivers on this simple premise. Poe would approve.

As for the title story … it’s fine. A pleasing slant on Poseidonis using wine as a mental transporting mechanism — very CAS — but I don’t understand why the volume wasn’t named “The Empire of the Necromancers” instead. Or maybe “The Weird of Avoosl Wuthoqquan” to purposely throw people.

Conveniently, I think this is the next Collected Smith volume I need to read. Such an amazing table of contents.

Great review of an excellent volume. The Demon of the Flower has always been one of my favorite CAS stories. I love it for its lapidary brilliance, its otherworldly weirdness, and its pervasive sense of dread, though as a story I guess there’s not much to it. It’s what I’d call fantasy, but it has a scientific or planetary aspect that seems to have gotten rarer in such things over time, as fantasy and sci-fi have gotten more and more genre-bound.

I agree with you about Smith’s attempts at writing exciting ray-gun stories. It’s interesting that his horror sci-fi (e.g., Yoh-Vombis) is so much more successful and ahead of its time: mysterious alien ruins, body horror, terrifying invertebrate parasites…

No one scares me quite the way that CAS does. Thank you for putting and keeping a spotlight on a great writer.

Personally I think Smith is best enjoyed – or introduced to others – in his worlds; Averiogne for the mainstream crowd, Zothique for the heavier scifi/fantasy or horror/hpl crowd. Lin Carter did an amazing job collecting them and publishing them.

Also check out the Eldritchdark website for his stories.

I delved into some CAS in the late part of 2016 and the early part of 2017. Audio, mostly (thank you, Youtube), but some actual reading, too.

He had quite the way with words, and when he’s firing on all pistons it is well worth it. That said, it didn’t take long for me to notice that his characters hardly ever DO anything, they are often just passive observers. The ironic humor also grated a bit on me.