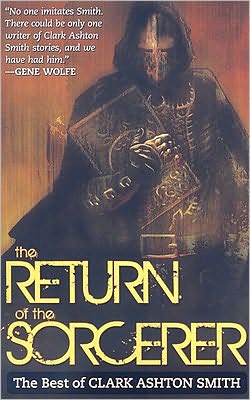 Confession: I am a fan of pulp fantasy who has, until recently, read very little Clark Ashton Smith. Yes, the man who comprises one of the equilateral sides of the immortal Weird Tales triangle has largely eluded me, save for a few scattered tales and poems I’ve encountered in sundry anthologies and websites.

This past week that all I changed when I cracked the cover of The Return of the Sorcerer: The Best of Clark Ashton Smith (2009, Prime Books). As I read the introduction by legendary fantasy author Gene Wolfe I knew I was in for something special: Not only was Wolfe singing Clarke’s praises (“No one imitates Smith: There could be only one writer of Clark Ashton Smith stories, and we have had him”), but he ended with this declaration:

“Earlier I wrote that Smith had come—and gone. That he had been ours only briefly, and now was ours no longer. That is so for me and for many others. If you have yet to read him, it is not so for you. For you solely he is about to live again, whispering of the road between the atoms and the path into far stars.”

The stories that followed did just that. Smith came alive for me, and I find myself a changed man. I have trekked on distant planets, seen alien beings beyond my conception, and peered wide-eyed over the shoulders of reckless sorcerers reading from musty tomes of lore that should not be opened. I have witnessed wonders and horrors beyond the knowledge of mankind. It was a wonderful experience. Though they comprise only a small part of his body of work, the stories of The Return of the Sorcerer reveal Smith as a man of staggering imagination, considerable poetic skill, and surprising literary depth.

My favorite tale was probably the second in the collection, “The City of Singing Flame.” In it, fantastic fiction author Giles Angarth discovers a portal to another world while spending the summer in a cabin in the Sierras. Passing through, he discovers an alien city of surpassing strangeness and wonder, from which emanates a siren-like music of ethereal beauty. At the city’s heart is a temple housing a swirling column of flame that draws various alien beings to it like the culmination of some great interplanetary religious pilgrimage. Angarth watches as the bravest step into the flame, and appear to, one after another, suffer instantaneous annihilation. But it also seems to promise, paradoxically, “a rapture of a moth-like death in its lofty soaring, the exultation and triumph of a momentary union with its elemental existence.”

Angarth manages to tear himself away from the scene and return to his cabin but the experience haunts his dreams. “The experience seemed, and still seems, incredible and unreal; and yet it has overshadowed everything else, and has colored and dominated all my thoughts.”

So what is this strange flame and its allure? Its ambiguity and potent symbolism are a few of those qualities which set Smith apart as a writer of weird fiction. Angarth only discovers the portal while summering alone in a cabin in the Sierras, a retreat into the world of his mind. The flame acts upon him with “captious thralldom and bewitchment, the insidious, gradual perversion of thought and instinct, as if the music were working in my brain like a subtle alkaloid.” When he leaves the first time Angarth finds it impossible to return to his stories; the poetic genius has left him, and he must find it again. Thus the flame can be viewed as the creative spark that possesses the most inspired of poets. Angarth is compelled to heed its call, abandoning the life he had known, regardless of earthly ties and obligations. Our bodies may be of perishable clay, but the imaginative power of mankind is eternal.

The story is also a hard, dangerous statement about the meaningless of material existence and the allure of the dream. When Angarth returns to the earth, he wonders why he didn’t choose to perish in the flame instead:

Now, as I write this, I am wondering why I came back again to the human world. Words are futile to express what I have beheld and experienced, and the change that has come upon me beneath the play of incalculable forces in a world of which no other mortal is even cognizant. Literature is nothing more than the shadow; and life, with its drawn-out length of monotonous, reiterative days, is unreal and without meaning now in comparison with the splendid death which I might have had—the glorious doom which is still in store. I have no longer any will to fight the ever-insistent music which I hear in memory. And—there seems to be no reason at all why I should fight it out. Tomorrow I shall return to the city.

The tale is followed by a sequel, “Beyond the Singing Flame,” which, though also well-done and similarly thought provoking (the Outer Lords seek to destroy the city and its siren-like flame with mechanized towers, perhaps Smith’s statement about the crushing influence of authoritative governments and organized society on the creative mind), was rather unsatisfying for me. I liked not knowing exactly what the flame was—and whether stepping into it resulted in instant orgasmic immolation.

The collection offers a number of other great tales of horror and wonder, of which some of my favorites included “The Double Shadow,” “The Vaults of Yoh-Vombis,” and “The Monster of the Prophecy.” I would not deign to measure Clark’s influence or engage in further analysis after reading a single collection of his works; besides, Ryan Harvey’s excellent four part series here at Black Gate speaks for itself (you can find part one here). I will just reiterate that if, like me, you haven’t experienced the wonder that is CAS, you have worlds to explore. Now that I’ve experienced The Return of the Sorcerer, I’m looking forward to many more such bewitching and wondrous excursions.

Hear, hear! Great to see yet another person singing the praises of Clark Ashton Smith, the Emperor of Dreams.

My favorite CAS story is probably “The Dark Eidolon,” althought it could be the wonderful and haunting “Xeethra.” As for the sheer creep-factor, “The Abominations of Yondo” will make your skin crawl.

Gene Wolfe is a true genius, but I disagree with his statement that CAS is “no longer ours.” He is very much with us in these amazing stories. Every so often I go back and re-discover his writing and it always hits me with fresh genius. (I just re-read “The Seven Geases” that other night!) The phantasmagorical power of his imagination lived on long after he shed his mortal coil. Thank the Gods of Zothique for that! 🙂

Frankly, on his writing style I think it’s a combination of better knowledge of English along with a “Crazy” like REH, but on a different tangent. I kind of see it like if HP LoveCraft was Paul McCartney and REH was Bob Dylan, CAS would be “Phil Ochs”, that is a combination of genius and vision, but so “Into it” the “Self-Promotion” suffered and he’s undeservedly little known.

That new book looks interesting. I might consider purchasing a new volume, but only if done with real love.

One thing I’m interested in is that Corben is supposed to be working on a new comic adaptation of “Isle of the Necromancers” from his “Zothique” cycle.

He’s already done “Return of the Sorceror” and “The Vaults of You Vombis”, but I’d really love to see Zothique visualized by him! There seems to be one image of that on Eldritch Dark, the Corben Adaptation. He also did a neat image from “City of the Singing Flame”…

I like his works for the stories, but I LOVE how “Non-PC” some of them would be… Like in Zothique he guesstimated long-term evolution of races and the Cannibals of Naat would really freak people out. Also, the “Isle of the Torturers” which I wonder if partly inspired Wolfe’s best known works…

Hi John, you’re right, CAS will always be with us through his writing. His works are that roaring column of fire in “The City of Singing Flame.”

Two of the stories you mentioned aren’t in The Return of the Sorcerer, so I’ll certainly be seeking them out.

GreenGestalt: I don’t know enough about the existing CAS editions to say whether The Return of the Sorcerer is worth owning. I suppose if you’re someone who can’t resist “best of” collections by your favorite artist, even if you already own all the tracks on individual albums, then you might want to pick it up. Plus it’s inexpensive–the trade paperback only cost me $14.95.

Yes, the Isle of Torturers was disturbing in many ways, but among them was Smith’s lack of commentary on the torturers’ lifestyle. Sadism, cruelty, and murder was just who they were, no better or no worse than any other culture.

[…] confessed on the Black Gate website back in July (my very first post here on BG, by the way) that, save for the occasional short story I encountered […]

Black Gate » Blog Archive » Adventures in Stealth Publishing: The Return of the Sorcerer

[…] Bastards. Our own Brian Murphy, usually rock-solid reliable, even wrote a detailed review in July of 2010, the poor deluded fool. It’s sad what deadline pressure can do, I know. When […]