Ash-Tree Press was a highly respected small press publisher of ghostly fiction. It was founded in Ashcroft, British Columbia, in 1994 by Christopher and Barbara Roden, and over the next 20 years produced 160+ collections, anthologies and novels of supernatural fiction, mostly reprints. They published volumes by M. R. James, H. R. Wakefield, A. M. Burrage, David G. Rowlands, Richard Marsh, Robert W. Chambers, E. F. Benson, Margery Lawrence, Marjorie Bowen, Alice Askew and Claude Askew, Jonathan Aycliffe, Frederick Cowles, and many, many others. Their handsome books, produced in very small print runs (anywhere from 5-500 copies, but typically  200-300), were usually outside my price range, but I certainly coveted them. The last one appeared in 2013.

In addition to premium reprints aimed at the collectors market, the Rodens had a keen interest in modern ghost fiction, and they published a lot of it. They took over the reins of All Hallows, the Journal Of The Ghost Story Society, with issue #6 in June 1994, and turned it into a thick regular anthology (the last issue, #43, was a whopping 304 pages) published every four months. And they produced five original anthologies between 1997 – 2008, including three nicely affordable paperback editions: Acquainted with the Night, At Ease with the Dead, and Shades of Darkness. All three had delightful covers by Jason Van Hollander.

Van Hollander’s intricate cover paintings are both modern and traditional in the best sense. They’re strangely detailed portraits of overcrowded medieval towns, with houses that huddle together in fear (or maybe just to gossip). The townsfolk remind me of Tim Burton’s The Nightmare Before Christmas — garrulous small town characters with colorful personalities, hurrying through the streets on mundane tasks, and who for the most part are dead. Ghosts drift through eaves, long tendrils of mist coil out of the river, brightly adorned skeletons wave to neighbours, and inhuman watchmen shuffle through the night streets, clutching lanterns.

Acquainted with the Night was the first one I found (I bought it in the dealer’s room at the World Fantasy Convention, I’m pretty sure), and it immediately sent me searching for the others. It contains original short fiction from Steve Rasnic Tem, Ramsey Campbell, Jessica Amanda Salmonson, Glen Hirshberg, Stephen Volk, John Pelan, Melanie Tem, Simon Bestwick, plus novellas by Adam Golaski and Black Gate author Paul Finch, and a novella by Chico Kidd in his Captain Luis da Silva series.

Acquainted with the Night was nominated for the Bram Stoker and BFA Award, and won both the International Horror Guild and World Fantasy Award for Best Anthology. Here’s the complete table of contents.

Introduction by Barbara Roden and Christopher Roden
“Rope Trick,” by Mark P. Henderson
“A Pace of Change,” by Don Tumasonis
“Beneath the Sun,” by Simon Bestwick
“The Old Tailor and the Gaunt Man,” by Brian J. Showers
“Vado Mori,” by Joseph A. Ezzo
“Breaking Up,” by Ramsey Campbell
“Northwest Passage,” by Barbara Roden
“Out on a Limb,” by Gary McMahon
“Jenny Gray’s House,” by Edward Pearce
“The Devil’s Number,” by Reggie Oliver
“Visits,” by Melanie Tem
“Weird Furka,” by Adam Golaski
“The Weeping Manse,” by Jessica Amanda Salmonson
“Salvage,” by Chico Kidd
“Beyond the River,” by Joel Lane
“Only Sleeping,” by Peter Bell
“You Should Have to Live with Yourself,” by Cathy Sahu
“The Sunken Garden,” by John Whitbourn
“Survivors,” by Edward P. Crandall
“Inside William James,” by Steve Rasnic Tem
“Someone Across the Way,” by Steve Duffy
“The Cross Talk,” by Rick Kennett
“The Belfries,” by Paul Finch
“Crazy Little Thing Called Love,” by John Pelan
“Three Fingers, One Thumb,” by Stephen Volk
“Safety Clowns,” by Glen Hirshberg
“The Listener,” by Christopher Harman

At Ease with the Dead showed up three years later.

“The Church on the Island,” by Simon Kurt Unsworth
“The Brook,” by John Llewellyn Probert
“Mr Poo-Poo,” by Reggie Oliver
“Dhost,” by Melanie Tem
“Special Perceptions,” by Richard Harland
“My Grandfather’s Ghosts,” by Gary McMahon
“We, The Remedials,” by John Travis
“The Light of the World,” by Peter Bell
“When Sorrows Come,” by Simon Strantzas
“The White Sea Company,” by Mark Valentine
“The Music Box,” by Mark Patrick Lynch
“Visiting Hours,” by Kealan Patrick Burke
“Lie Still, Sleep Becalmed,” by Steve Duffy
“Threads,” by James Doig
“The Heights,” by Matthew Holness
“Sighted,” by Iain Rowan
“The Calvary at Banská Bystrica,” by Helen Grant
“Death Knock,” by Paul Lewis and Steve Lockley
“Blue Train,” by Joel Lane
“A Pillar of the Church,” by John Whitbourn
“The Admiral’s House,” by Marc Lecard
“Recession,” by Robert Morrish
“‘And So Will I Remember You…’,” by Chet Williamson
“Dr Upex and the Great God Ing,” by Antony Oldknow
“The Tank,” by Paul Finch
“The Charlie Club,” by J. J. Beazley
“The Swing,” by Don Tumasonis
“A Small Cold Hand,” by Simon Bestwick
“Hell Hath No Fury,” by Keris McDonald
“The Palace,” by Barbara Roden

The last anthology in the series, Shades of Darkness, appeared a year later, in 2008.

Introduction by Barbara Roden and Christopher Roden
“The Oram County Whoosit,” by Steve Duffy
“Cold Reading,” by Simon Bestwick
“Smugglers,” by Guenther Primig
“The Old Traditions,” by Paul Finch
“The Devil’s Funeral,” by Reggie Oliver
“Leaves Brown,” by Ian Rogers
“In Old Oaks,” by Keris McDonald
“Thyxxolqu,” by Mark Samuels
“Flames,” by Lawrence C. Connolly
“Soft Little Fingers,” by David A. Riley
“The King of Majorca,” by Frances Oliver
“Monster,” by Melanie Tem
“The Children,” by Christopher Harman
“Cargo,” by E. Michael Lewis
“A Bit of a Giggle,” by Harvey Peter Sucksmith
“Archangel,” by Peter Bell
“Brokenback Isle,” by Gary McMahon
“Old Man’s Pantry,” by Simon Kurt Unsworth
“A Mouth to Feed,” by Joel Lane
“In Vitro,” by Michael Cox
“Out of Season,” by Marion Pitman
“Under the Overpass,” by Simon Strantzas
“The Apartment of Bryony Hartwood,” by Mark Patrick Lynch
“Grauer Han,” by Helen Grant
“Back Roads,” by Barbara Roden
“Esmeralda,” by Glen Hirshberg
Biographical Notes

Although I don’t have copies (they never appeared in paperback editions, and I was too cheap to spring for the hardcovers), Midnight Never Comes and Shadows and Silence are really the first in the Ash-Tree original anthology series. 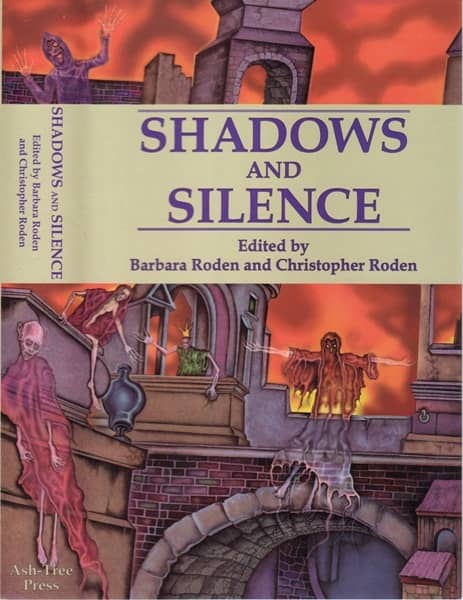 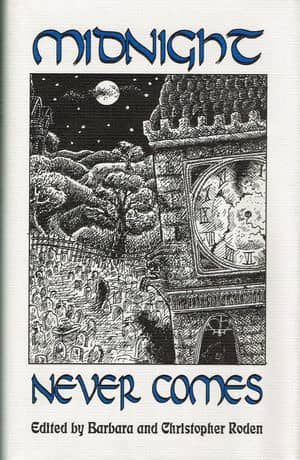 Midnight Never Comes was published in 1997, with a black & white cover by Rob Suggs (see right). It was nominated for the 1998 British Fantasy Award for Best Anthology/Collection.

Shadows and Silence arrived in 2000, and was the first with a color cover by Van Hollander. It was nominated for the IHG and World Fantasy Award for Best Anthology.

These books, like virtually all of Ash-Tree’s output, have become fairly expensive collectibles over the past few years, even the paperback editions. But they are available to the diligent hunter. Here’s the complete details for all five original anthologies.

The ISFDB lists all 160 volumes from Ash-Tree here.

Giving up the Ghost: All Hallows 43
The Nightmare Men: “The Diehard” by Josh Reynolds

I love the Jason Van Hollander covers especially Acquainted with the Night.

Good question! ISFDB says his last cover art commission was published in October of last year (for Best of Black Wings), so I doubt it!

ISFDB also lists over a dozen short stories for Van Hollander, which was a surprise to me.

Ash-Trees really were beautiful. I only have one (They Return at Evening by H.R. Wakefield), but I’d give my eye-teeth for more.

I’m interested in accumulating a few more. There are still a handful in print and for sale on their website; perhaps I’ll start with those.

I would not recommend ordering from Ash-Tree directly. A couple of years back I sent them 185 dollars for the first two volumes of their E.F. Benson series. I never received my books. I had sent them e-mails and I’ve called them directly. The first couple of e-mails I received re-assurances that the books would be mailed directly, but further inquiries got no response. They never returned any of my phone calls.

Whatever they were in the past (and I had bought several volumes from them, and had enjoyed them), right now I consider the Rodens no better than thieves. They don’t deserve your time or your money.

Yikes! That’s a terrible story. I haven’t heard any similar reports, but I did hear they’ve had a lot of trouble with their website.

They were a respected small press business for many years. Any theory what happened? Was there a change in ownership?

I’m not certain what happened. Barbara and Christopher Roden still own Ash-Tree, to the best of my knowledge. I believe Christopher Roden was ill several years ago – heart problems or perhaps a heart attack. While I’m sympathetic to that, if they are not capable of fulfilling physical orders then they should not be taking such orders.

It’s a lousy situation. I bought several of their books back when I was younger, including their big A Pleasing Terror collection of M.R. James ghost stories. Their books are well-made and beautiful. But again, I can’t recommend buying from them first hand.