The Year’s Best Horror Stories: Series VI, published in 1978, was the third volume in the series edited by horror author and editor Gerald W. Page (1939–). Michael Whelan (1950–) appears for the fourth time in a row on the cover, though with a very different style from his previous efforts. Where Whelan’s covers usually have a big surreal background, this one is more muted and draws your eyes to the foreground. It’s fairly creepy, but not one of my favorite Whelan horror pieces.

In comparison with the series’ first British editor, Richard Davis, Gerald Page tend to focus on American authors, almost all men. There are three women in this volume: Janet Fox, Tanith Lee, and Lisa Tuttle, and a total of three Brits: Ramsey Campbell, David Campton, and Tanith Lee.

Series VI includes fourteen stories, only one from a professional magazine; three came from books, four from fanzines, but six stories were original to this volume. Six! Almost half of the stories in an anthology called Year’s Best were not published previously. Defending another editor in a different context John O’Neill recently said, it’s “entirely the editor’s call.” But doesn’t Year’s Best imply more than simply the editor’s own particular choices? Maybe not. And perhaps it doesn’t matter if the collected stories are indeed that good.

Page includes a new kind of introduction in The Year’s Best Horror Stories: Series VI, which signals an intriguing change. He does here what became familiar in later horror anthologies (I’m thinking especially of Ellen Datlow) where the editor lays out a “State of the Union,” letting readers know what the editor sees as the primary sources of horror, the best new talent, and the markets and venues driving the field, not to mention the sorts of themes and ideas that seem to be stoking it. It was insightful.

I really liked this section. I get sort of tired of the typical horror intro that says something like, “Since the dawn of time mankind has always been frightened…” or where the editor gives an idiosyncratic take on where the horror field is. Page points to the historical importance of the recently folded fanzine Macabre, edited by Joseph Payne Brennan, and the then-current importance of fanzines like Whispers and Weirdbook as premier horror outlets. I hope the future volumes continue with these sorts of intros.

But as with any anthology, the proof is in the pudding. And The Year’s Best Horror Stories: Series VI was not a disappointment!

David Campton’s “At the Bottom of the Garden” is about a young girl whose parents assume she has just an imaginary friend. This “friend” evidently can do some pretty amazing things. More of a fantasy or faerie tale, it only turns horrific towards the end when the parents pry into this girl’s “make-believe” world. A macabre ending indeed!

“Ever the Faith Endures” by Manley Wade Wellman follows the adventure of one Wofford Belson as he returns to his ancestral family’s estate in England. What begins as a pleasant afternoon with a distant female cousin, who has plenty of chilling rumors to share about the family’s history, turns into a creepy, wackadoodle tale as he enters the old manor to find that the cousin keeps a long-held family pagan secret. A good monster tale that I did not see coming.

A Nest of Nightmares by Lisa Tuttle (Sphere, 1986). Cover by Nick Bantock

Lisa Tuttle’s 1986 collection A Nest of Nightmares is often mentioned as a horror classic, but I had never read any of her stuff until “The Horse Lord.” It’s about an author couple who live with their young children on an old farm, which has been rumored to suffer from a Native American curse. The last known relative to live there was evidently eaten — by their own horses! That’s a chilling image. Horses no longer live in the barn so surely this family is safe. But evidently this curse can transfer to children! An excellent and creepy story. I’m interested in tracking down more Lisa Tuttle.

“Best of Luck,” by David Drake was a typical werewolf story but interestingly set in the Vietnam War. I like Drake’s horror stories. They tend to be short but pack a wallop. 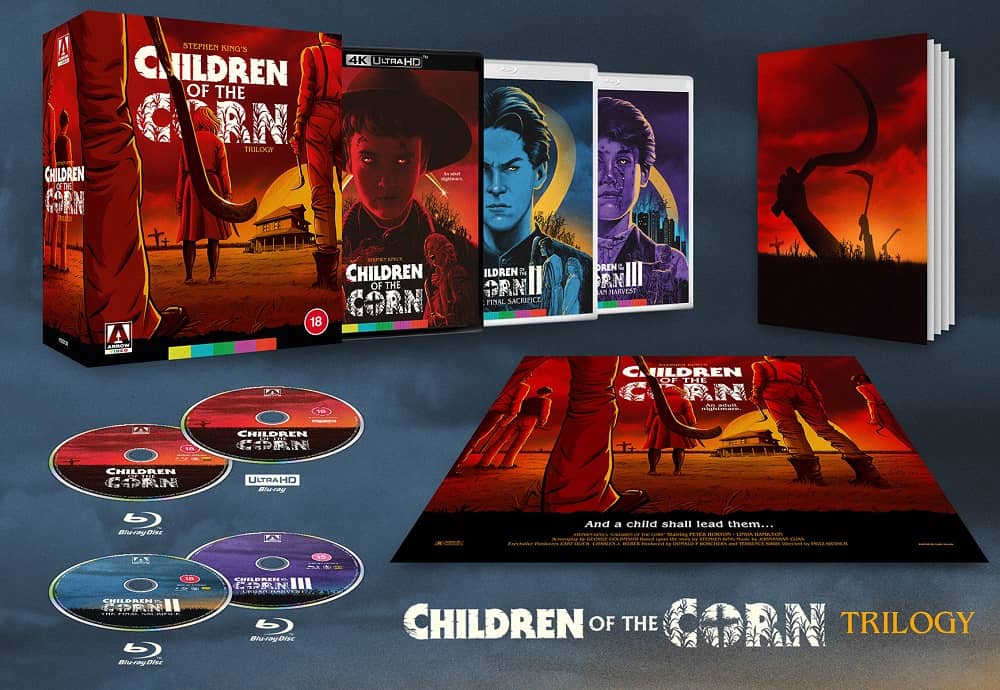 The Children of the Corn Trilogy on Blu Ray

Stephen King’s short story “Children of the Corn” was famously made into a bad horror movie franchise. (I thankfully have never seen any but the first one!) But the source material surpasses that B-grade movie by far.

I always find the dialogue between King characters (at least older King stories) to sound like stuff from 1970s soap operas. But King does an excellent job raising your hair. Note to self: Don’t stop in a town that seems completely deserted! 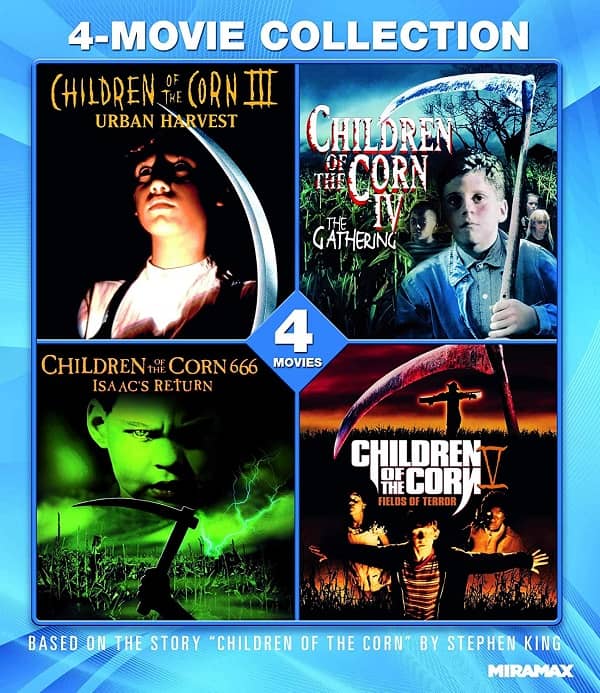 Even more Children of the Corn

These were only some of the best. I also was highly impressed with Russell Kirk’s “There’s a Long, Long Trail A-Winding,” by far the longest piece here, and something of a maudlin tale, but highly effective. It was more a sentimental ghost story, but extremely satisfying. I also enjoyed Janet Foxe’s “Screaming to Get Out,” another unique monster story.

This anthology had so many good horror stories. But let me talk about my two favorites. Runner-up for top pick was Tanith Lee’s “Winter White,” which was closer to sword and sorcery than horror. A brutal northern warlord finds a magical pipe that summons an elf-like woman. This “woman” is quite creepy. Besides never talking, and never leaving his side, her skin is marble white and her eyes are jet black (i.e. no whites). In addition, she doesn’t seem to interact with anyone, and no one can see her but him. The warlord’s growing fear eventually turns to brutality, and he rapes her. But nothing he does seems to dissipate the elven phantom. As the story progresses, he becomes continually more erratic, and his people perceive him as going crazy. Years later he ends up an insane hermit, but seems to eventually figure out a way to get rid of the haunt. But, unfortunately, his rape ends up having horrific consequences. Tanith Lee has had a previous story or two in this series, but this was by far her best.

But my favorite story is from the same author as my favorite story in the last volume: “Undertow” by Karl Edward Wagner. Like his “Sing a Last Song of Valdese,” this was also a sword and sorcery tale starring Wagner’s inimitable character Kane. “Undertow” is something of a toxic love story with Kane becoming a magical Doctor Frankenstein. It is chiefly fantasy but has horrific tidbits throughout, and at the very end as well. Wagner was a master of setting the horror story within the fantasy genre. But as with Tanith Lee’s “Winter White,” perhaps the sword and sorcery genre is a perfect playground to explore the horrific.

I have been highly impressed with Gerald Page’s selections. Legitimately year’s best horror stories or not, he knows a good horror tale. I looking forward to reading his 1979 volume!

“Introduction” by Gerald W. Page
“At the Bottom of the Garden” by David Campton (Whispers #9, 1976)
“Screaming to Get Out”  by Janet Fox (Weirdbook 12, 1977)
“Undertow” by Karl Edward Wagner (Whispers #10, 1978)
“I Can Hear the Dark” by Dennis Etchison (for this volume)
“Ever the Faith Endures” by Manly Wade Wellman (for this volume)
“The Horse Lord” by Lisa Tuttle (Magazine of Fantasy and Science Fiction, 1977)
“Winter White” by Tanith Lee (for this volume)
“A Cobweb of Pulsing Veins” by William Scott Home (Hollow Faces, Merciless Moons, 1978)
“Best of Luck” by David Drake (for this volume)
“Children of the Corn” by Stephen King (Night Shift, 1977)
“If Damon Comes” by Charles L. Grant (for this volume)
“Drawing In” by Ramsey Campbell (for this volume)
“Within the Walls of Tyre” by Michael Bishop (Weirdbook 13, 1978)
“There’s a Long, Long Trail A-Winding” by Russell Kirk (Frights, 1976)