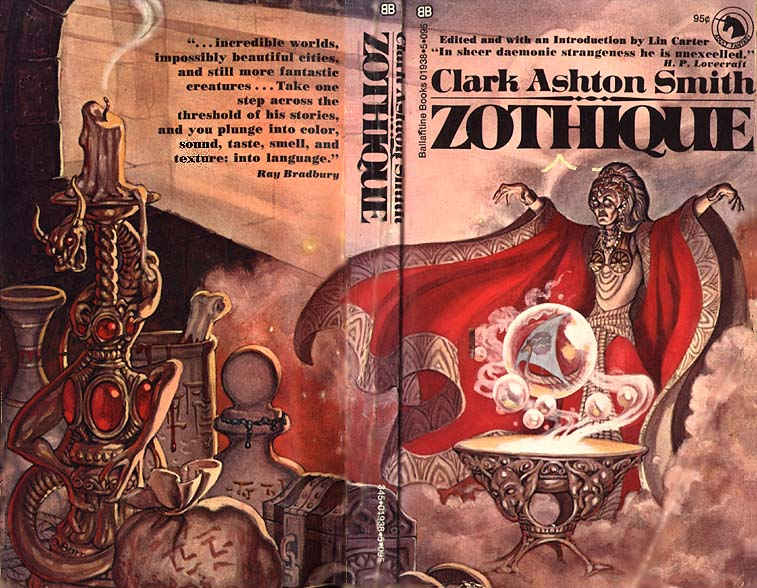 Some years back Keith West wrote a series of articles for Black Gate on the legendary Ballantine Adult Fantasy series edited by Lin Carter. In fifteen pieces between 2013-2015 Keith covered the first fourteen or so titles, including The Blue Star by Fletcher Pratt, The King of Elfland’s Daughter by Lord Dunsany, and The Doom that Came to Sarnath by H. P. Lovecraft. Yesterday I was delighted to see that Keith picked up the reins again at his own blog, Adventures Fantastic, to review the 16th book in the series: Zothique by Clark Ashton Smith. Here’s a taste.

Zothique was the first of four collections of Clark Ashton Smith’s short fiction that appeared in the BAF series. The wrap-around cover is by George Barr. (One of the best things about this line of books was their covers.)… Zothique is the last continent on a far future Earth in which much science and history has been forgotten, and magic has returned. If this reminds you of Jack Vance’s Dying Earth, keep in mind Smith did it first. Some of the stories are better than others, but all are well-done. Here are a few of my favorites.

Check out the whole thing here, and Keith’s previous articles for BG here. While you’re at his website, leave a comment encouraging Keith to keep going! I’d love to read his thoughts on all 65 books in the set.

I still have that book in a protective slip cover. I first read it back in high school and I did judge it by its cover. Empire of the Necromancers was probably my favorite story in the volume.

Thank you, John. I appreciate the shout out. And thanks to those of you who have read the post and left comments.

> I first read it back in high school and I did judge it by its cover.

If you’re going to judge a book by its cover, Zothique is not a bad choice!

> Thank you, John. I appreciate the shout out.

You’re very welcome Keith! Keep us posted if you continue the series at Adventures Fantastic.