Here’s a Jack Vance novel I haven’t read: Maske: Thaery, a science fiction adventure first published in hardcover in 1976. The Wikipedia entry does a fine job of summarizing how the book fits into Vance’s catalog, I thought.

Maske: Thaery is a science fiction novel by American writer Jack Vance, set in his Gaean Reach milieu… Maske: Thaery marks the beginning of the period when Vance’s novels were published exclusively straight to paperback, whereas prior to this the majority had first appeared in science fiction magazines, the last such examples being Durdane trilogy, serialised in The Magazine of Fantasy & Science Fiction from 1971 to 1973, The Gray Prince, serialised in Amazing Science Fiction in 1974, and Marune: Alastor 933, also serialised in Amazing Science Fiction in 1974. The twofold title of Maske: Thaery, with its separating colon, would suggest that it was originally intended to be part of a serial, similar to the Alastor novels (Trullion: Alastor 2262, Marune: Alastor 933, and Wyst: Alastor 1716), although no further volumes were written… Maske: Thaery continues Vance’s interest in richly textured, strongly xenological settings, in which an outsider protagonist comes into conflict with a bewilderingly complex social hierarchy, other examples being Emphyrio (1969) and the Durdane trilogy.

Maske: Thaery placed 12th on the annual Locus Award list for Best SF Novel in 1976. After Jack Vance’s death in 2013, I read the following tribute/review at Speculation…, which called the book “one of his best.”

The novel is one of Vance’s more delicate works. The narrative polished smooth, it contains every ounce of Vance’s hallmark style, but trades salience for subtlety… That Vance couples the consistently smooth prose with theme, however, is what makes Maske:Thaery one of his best…

Vance’s imaginative world building, culture sculpting, scene setting, deft plotting, and sublime observations on the little things that make humanity tick are present in full quantity from front to back… In the end, Maske: Thaery is certainly one of the more unique works in Jack Vance’s oeuvre. Part bildungsroman, part cautionary, and all story, the master of imaginative science fiction and fantasy weaves yet another highly readable tale of intergalactic culture and adventure. Reviving a motif from “The Moon Moth”, hinting at the indignation of Cugel that was to come, and sketching out a setting that would later be reworked in the Cadwal Chronicles, the novel comes highly recommended for anyone who enjoys the author. One of many great entry points, no reason not to start here if you haven’t tried Vance yet.

The book was originally published in hardcover by Berkley/Putnam in 1976 (not paperback, as the Wikipedia article suggests). The first paperback edition was from Berkley Medallion in September 1977, with a striking cover by Ken Barr (see below).

This isn’t a particularly hard find. I bought the copy at top on eBay for $3.89 last month. There are usually half a dozen copies available for under $10. 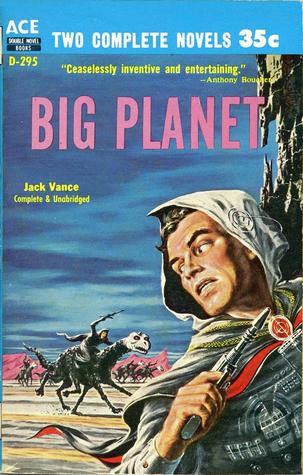 Maske: Thaery was reprinted by Berkley Books in May 1983. It is 216 pages, priced at $2.50 in paperback. The cover is by David Mattingly. The book has been reprinted multiple times since its hardcover appearance in 1976, most recently last month from Spatterlight Press. A digital edition was published in 2011 by Gateway / Orion.

I know I’ve read this one, although it’s been a good few years and I honestly don’t remember details — a lot of those planetary books (the Gaean Reach stuff, etc.) kind of blur into each other from a distance.

Must do something about that one of these days …

(And I’m pretty sure my paperback is the Berkley cover at the top, which I do quite like.)

I like MASKE: THAERY a great deal — one of my favorite Vance novels, for all its relative modesty.

if anyone watched the Colbert show Wednesday night – Paul Giamoti was the guest and he and Colbert talked about their love for classic Sci-Fi. They spoke of Vance and Colbert even had a couple of paperbacks he gave to Giamoti. Very geek worthy stuff.