Jack Vance was an amazingly prolific writer, and he wrote for over six decades. That’s two decades shy of Jack Williamson’s astonishing eight-decade run as an SF writer, but still pretty darned impressive. Vance made his fiction debut in the Summer 1945 issue of Thrilling Wonder Stories with “The World-Thinker,” and his last short story, “Phalild’s Fate,” appeared in the ebook collection Chateau d’If and Other Stories in April 2012, a year before he died at the age of 96. No one is entirely sure how many books he produced in all that time, and estimates range from 60 to as high as 90.

Not too surprisingly, one of the marvelous things about Jack Vance is that I’m still discovering his work. I’ve never read his Durdane trilogy from the 1970s, for example — and in fact, I acquired a complete set for the first time last April at the Windy City Pulp & Paper show here in Chicago. Before I settled in to read it, I had a look back at its publishing history (doesn’t everyone do that?), and discovered just how many editions there have been over the years. Here’s a quick survey of a few of the more interesting incarnations of one of Vance’s more overlooked fantasies.

The Durdane trilogy consists of three novels, first published as paperback originals by Dell in the early 70s with covers by the great Paul Lehr:

I was really delighted to find a complete set in fabulous, almost brand new condition at Windy City this year. While I was scanning the covers, I flipped the books over and scanned the backs as well, since that saves me from having to type in the book blurbs. Here you go (click for more legible versions):

A little homework revealed that all three novels were originally published in The Magazine of Fantasy and Science Fiction, each broken into two installments. I’m not certain if the magazine versions were abridged, but probably. The first, The Anome, also appeared under a different title: The Faceless Man. As we’ll see in a second, when Ace reprinted the novels a few years later, that was their preferred title.

The magazine appearances were:

Below are the covers for the first installments of each, with covers by Jack Gaughan, Ron Walotsky, and David Hardy, respectively. 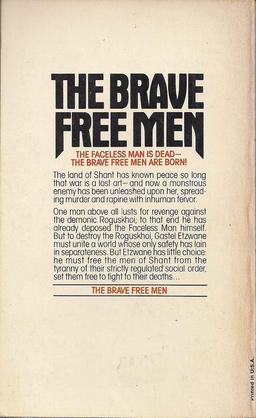 F&SF isn’t particularly known for serializing novels… to be honest, I’m not sure how many other times they’ve done it. Certainly not much while I’ve been a reader, which started in the mid-70s.

Four years after Dell brought the series into print, Ace reprinted the entire trilogy for the first time:

They re-wrote the back-cover text, too. Here’s a sample from The Brave Free Men:

The Faceless Man is Dead —
The Brace Free Men Are Born!

The land of Shant has known peace so long that war is a lost art — and now a monstrous enemy has been unleashed upon her, spreading murder and rapine with inhuman fervor.

One man above all lusts for revenge against the demonic Roguskhoi: to the end he has already deposed the Faceless Man himself. But to destroy the Roguskhoi, Gastel Etzwane must unite a world whose only safety has lain in separateness. But Etzwane has little choice: he must free the men of Shant from the tyranny of their strictly regulated social order, set them free to fight to their deaths…

Click the image at right to read the text in its native environment.

A decade later, Ace reprinted the series with a fine set of new covers by Peter Dana: 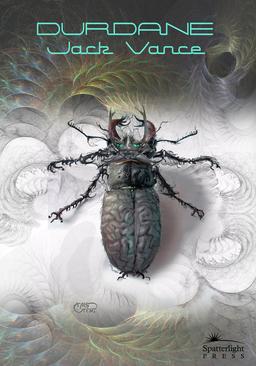 Spatterlight Press released digital editions of all three novels, and an omnibus collection, for the first time in 2012, with marvelous new covers by Konstantin Korobov. Their Facebook page is here.

This is a great overview of the trilogy. I love the Durdane books! I first read them in back-issues of F&SF, and then picked up the paperbacks decades later.

As far as I can remember, there was some abridging for the magazines, but not enough to disfigure the books. F&SF wasn’t serializing novels much by then, but they did also do Zelazny’s Jack of Shadows, where the serial only lacked one or two brief scenes that later appeared in the paperback.

I’m trying to avoid spoilers, so I’ll say rather vaguely: I hated the conclusion of THE ASUTRA when I first read it, but over the years have come to appreciate it. It’s a strangely antiheroic adventure novel; I don’t think anyone but Vance could have written it.

I have never read this series, thanks John, it seems like I have some catching up to do.

Another great Vance trilogy that showed how much he could fit into three relatively slim volumes.

[…] the years, but made their debut in The Magazine of Fantasy and Science Fiction 1971–1973. See Black Gate for more info and lots of great […]

Every one of those covers is its own kind of awesome. I haven’t read much Vance — got to fix that — but I can see a book’s got to have something special going for it when so many artists find so many cool ways to express it.

F&SF has serialized novels since I’ve been a reader, starting in the mid-70s! Not very often though. (They did it most in the ’60s, I think.)

Shortly after I started buying it, they serialized VENUS ON THE HALF SHELL, by “Kilgore Trout” (Philip Jose Farmer, with Vonnegut’s grudging permission). Not much later I recall Silverberg’s THE STOCHASTIC MAN. In 1979/1980, they even did Silverberg’s very long LORD VALENTINE’s CASTLE (though it must have been a cut version, even in four parts).

Most recent one I remember is Terry Bisson’s (admittedly very short, perhaps just a novella) PLANET OF MYSTERY, in 2008.

The main point stands, of course.

I enjoyed the DURDANE books a great deal, one of my favorite (of many!) Vance series.

> F&SF wasn’t serializing novels much by then, but they did also do Zelazny’s Jack of Shadows, where the serial only lacked
> one or two brief scenes that later appeared in the paperback.

I love Jack of Shadows, although it’s something of a problematic book for me. I read it in my early 20s and considered it a fine example of sword & sorcery, with a resourceful and determined hero. I read it again in my 30s, and was appalled to discover that the hero is pretty clearly the villain of the piece. (Although he makes a desperate, last-minute attempt at redemption at the end, but we never learn if he succeeds or not.)

It was Jack of Shadows that taught me the real power of first-person narrative, and how strongly readers can come to sympathize with a narrator, even one with a black heart.

> I have never read this series, thanks John, it seems like I have some catching up to do.

If you do, Ape, let us know what you think of it!

> Another great Vance trilogy that showed how much he could fit into three relatively slim volumes.

I note that most of early Vance comes in pretty slim volumes. I read a horror story about how he was required to essentially cut the text of his first novel, BIG PLANET, in half for publication… I’m certain that put him off long novels for a while!

> Every one of those covers is its own kind of awesome…
> I can see a book’s got to have something special going for it when so many artists find so many cool ways to express it.

That’s exactly how I felt as I put together this article. Books that have a deep publishing history in the genre always have a certain fascination for me.

> F&SF has serialized novels since I’ve been a reader, starting in the mid-70s! Not very often though.

I should have checked my facts with you before going to press! (Of course, I usually end up saying that.) 🙂