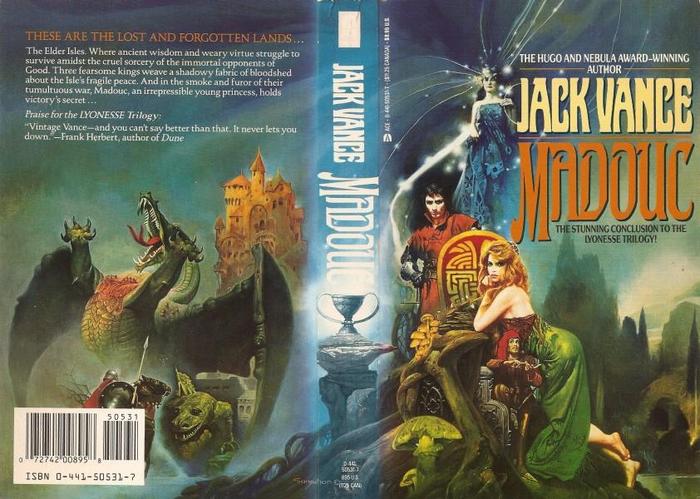 I’ve spent some time recently talking about some of Jack Vance’s most popular series, including The Dying Earth and Planet of Adventure. But the book that introduced me to Vance was the third volume of his high fantasy Lyonesse trilogy, Madouc, originally published in hardcover by Underwood Miller in 1989, and reprinted in trade paperback by Ace Books with a gorgeous Sanjulian cover in 1990 (above, click for bigger version).

It’s usually tough to come to a fantasy trilogy with the third volume, but Vance made it easy. In fact, I was only dimly aware that it was part of a series as I read it. What I most remember about Madouc was that it was funny, gripping, vivid, and unlike anything else I’d ever read. Vance took subject matter wholly familiar to every modern fantasy reader — the Land of Faerie — and made it fresh and new.

Madouc won the World Fantasy Award for Best Novel in 1990, beating out some pretty stiff competition, including Carrion Comfort by Dan Simmons, Soldier of Arete by Gene Wolfe, and The Stress of Her Regard by Tim Powers. My friend Rodger Turner, with whom I founded SF Site a few years later, was a Judge that year, and I remember asking him about it shortly after I finished reading Carrion Comfort, which I was convinced would be the hands-down winner. “The process took… compromises,” Rodger deadpanned.

Vance published the first novel in the series, Lyonesse, in 1983, followed by The Green Pearl in 1985, and then Madouc in 1989. The entire series was eventually published in paperback by Berkley and Ace Books. 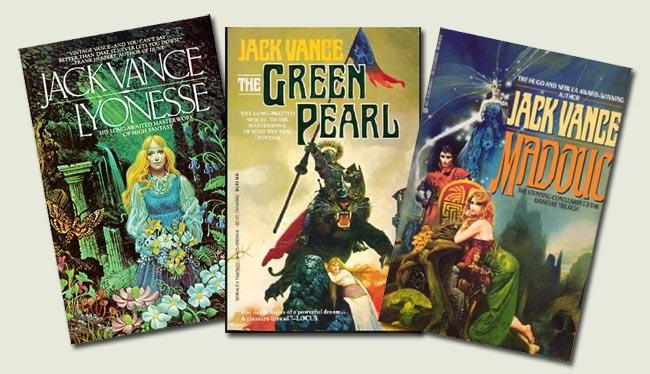 The Berkley paperback cover for Lyonesse was by James C. Christensen; Sanjulian also did the cover for the Berkley edition of The Green Pearl.

Jack Vance has had some excellent cover art over the years, but I think the covers for the various editions of the Lyonesse trilogy are among the best of his career. It was James Christensen’s lush artwork for the Underwood Miller hardcover edition of Madouc (below left) that finally enticed me to read my first novel by Jack Vance. Like Vance’s writing, the cover was ornate and filled with surprises (note the fairy girl hiding in plain sight in the greenery on the right.)

Madouc was reprinted in the UK in paperback by Grafton Books in August 1991, with a beautiful but stark cover by Mick Van Houten (above middle), simultaneous with the mass market paperback from Ace in the US (right.) 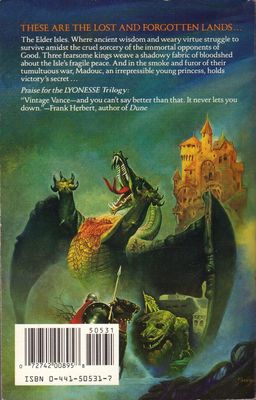 I have my pick of book blurbs to share with you, but I rather like the concise summary on the back of the Ace paperback edition (right; click to embiggen.)

These Are the Lost and Forgotten Lands

The Elder Isles. Where ancient wisdom and weary virtue struggle to survive amidst the cruel sorcery of the immortal opponents of Good. Three fearsome kings weave a shadowy fabric of bloodshed about the Isle’s fragile peace. In the furor of their tumultuous war, Madouc, an irrepressible young princess, holds victory’s secret.

When fantasy covers were still pieces of art…

My favorite series ever, and I only just recently finished reading it all the way through. I found the Green Pearl years ago, but just recently got “The Complete Lyonesse” off Amazon used.

Usually when I get to the end of a series this big I’m ready for it to end. This wasn’t the case with Madouc. I probably could have read a fourth and possibly a fifth book in this series. That’s a real testament to Vance’s skill as a writer, and these books are some of his best.

> When fantasy covers were still pieces of art…

No question to me that Sanjulian was one of the most gifted artists to ever work in the fantasy field. I wish he was still active.

> That’s a real testament to Vance’s skill as a writer, and these books are some of his best.

Thanks for the review, CMR! I’m fond of this one because it’s one of Vance’s few pure fantasies… he tended to work mostly in SF (even THE DYING EARTH is technically SF, not fantasy.)

An exercise for the reader: Imagine how things might have gone differently if instead of Dying Earth-type magic (spell memorization), Gary Gygax had used Lyonesse-type magic (Sandestins and indenture points which, admittedly, also show up in Dying Earth’s Rhialto stories) for D&D …