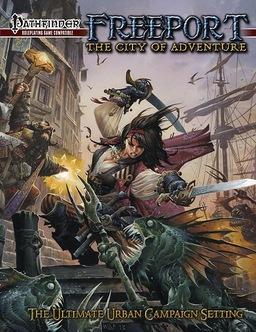 Freeport is one of my favorite RPG settings. It debuted in a slender 32-page module called Death in Freeport, from a young company called Green Ronin Publishing, at GenCon 2000 — simultaneous with the Third Edition D&D Player’s Handbook. As the first adventure to take advantage of the OGL (Open Game License), it was one of two products that launched the d20 era.

Freeport has been expanded and supported with a host of products over the years, and now Green Ronin has upgraded the setting for Pathfinder with a massive new full color hardback edition, with new locations, new NPCs, and a brand new adventure for low-level characters. It was funded by a hugely successful Kickstarter campaign that completed on April 1, 2013 — and now you can share in the fruits of that success.

Freeport is one of the classic city settings of fantasy roleplaying and it’s back — bigger and better — in this monstrous new sourcebook for the Pathfinder Roleplaying Game. Clocking in at a massive 544 pages, Freeport: The City of Adventure lovingly details a metropolis that mixes fantasy tropes, piracy, and Lovecraftian horror into an action packed setting for your RPG campaign. The city is now more detailed than ever, with added locations, characters, hooks, and a brand new, full-length adventure. The book, featuring a cover by fan favorite artist Wayne Reynolds and a fold-out map of the city, also includes full rules support for the Pathfinder Roleplaying Game: new classes, archetypes, feats, and magic items. As always you can use Freeport on its own or drop it into your campaign setting of choice. So set sail for Freeport, mateys! Come for the pirates, stay for the cosmic horror!

Wow 544 pages is HUGE, but that price tag is even bigger in my eyes. No way I could afford a $75 Pathfinder setting, especially since Freeport is currently available in D20 for far less on ebay.

Yeah, I’m afraid I have to agree with you there. $75 seems astronomically high — especially for a book that’s been at least partially funded by a Kickstarter campaign.

My best guess is they set the price to keep in line with the Kickstarter rewards – $80 was the lowest pricing tier that actually got you a copy of the physical book.

Just saw this at my FLGS. It certainly is HUGE. But that’s quite a price tag. That’s the major reason I’ve switched over to PDF only.

Not only in buying product, but in backing The Lost Lands kickstarters, going pdf only lets me stretch my dollars a lot further.

I was a patron for Kobold’s ‘Dark Deeds in Freeport,’ which I thought turned out well.

I got my backer copy a couple of weeks ago. It’s an impressive book, but the print run was not very large.

I’m glad that the KS included pdfs of material for non-Pathfinder settings and highly recommend the Savage Worlds companion.

Picked up a PDF of this as part of a Humble Bundle for a steal.

If you are a Freeport fan from 3rd Edition, or you like pirate stuff, this is an EXCELLENT book.

Well… I’m a Freeport fan and I love pirate stuff…. so sounds like your review applies to me!

Thanks Bob. Copies are currently available on Amazon for around $53. I may spring for it yet.